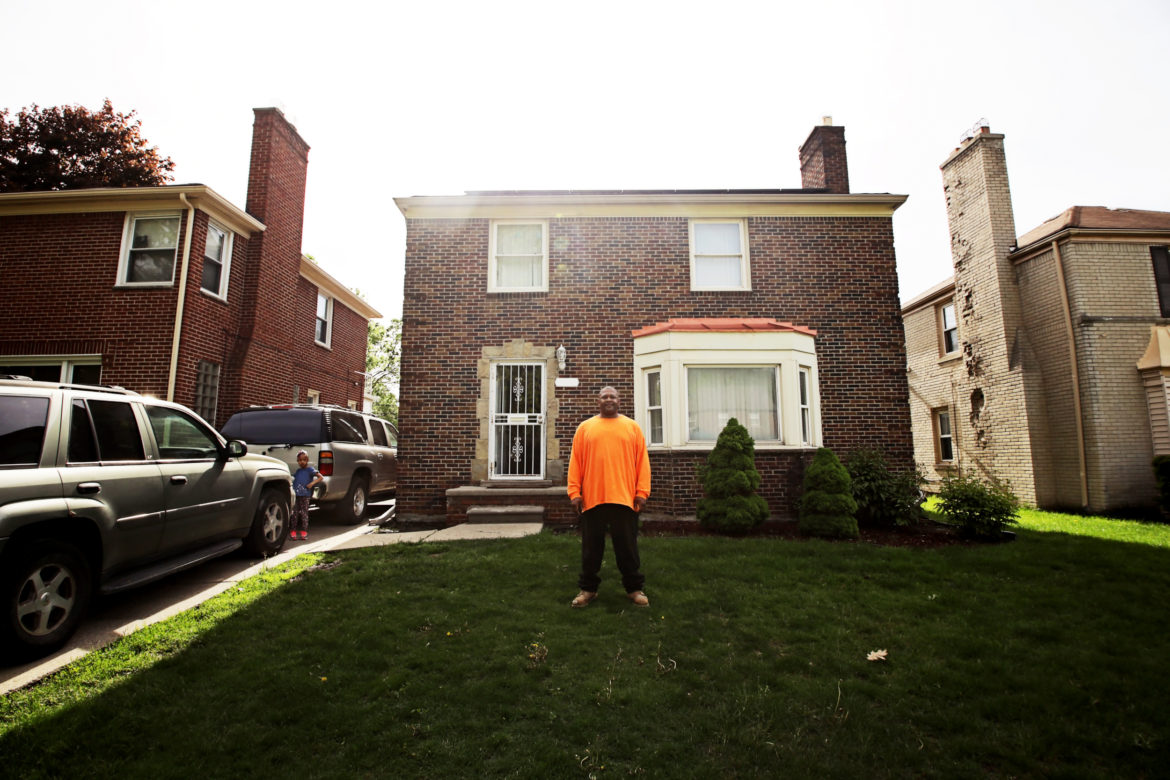 Tim Summers installed solar panels on his Detroit home in a quest to become more energy independent and to help combat global warming.

Every time Tim Summers arrives home from work these days, he’s hit by an incredible feeling of accomplishment. Newly installed solar panels on his house greet him, glittering in the sun and marking a milestone for Summers, who began researching how to become more energy independent more than a year ago. Although he’s not an environmental expert, as a unionized asbestos worker, he knows a thing or two about pollution.

“Global warming is happening, whether you are into worrying about the planet or not,” he says, “and I know we have a bunch of other problems, but we still have to look forward to the future for our kids and grandkids.”

At 49, Summers is the father of six children. His family’s home stands on a shady street in the middle-class Grandmont Rosedale neighborhood of Detroit. Clearly, Summers cares about his residence. Other home improvements are evident, like new living room furniture that still has the tags on it.

Founded in 2010, Distributed Power has been intentional about designing financial strategies for people who lack upfront cash to have solar power installed on their homes.

“Distributed Power is about distributing power back to the people,” explains founder Brandon Knight. “This means addressing the needs of homeowners and communities by being creative. When we do projects that don’t meet traditional financial objectives, we recognize it as an opportunity to shift an economic dynamic in Detroit.”

For Summers and his family, this economic shift will begin with a significant investment, one that is out of reach for most Detroiters, especially people of color who have been historically shut out from opportunities to build wealth. The Summers family was able to pay cash for their panels with the hope that the annual savings and tax credits would eventually pay off. The biggest benefit was the knowledge that they are helping the environment.

“We don’t have extremely high utility bills,” Summers explains, “We use energy efficient light bulbs and appliances. I wanted to help the environment and own my own power.”

Summers’ passion for the environment, however, is not widely felt in his community.

Solar power and environmental issues are not directly being marketed to communities of color, and for many, thinking about the environment is not a priority. Under siege by systemic racism, immigration issues, and economic inequality, environmental issues rank low on the list of most low-income Americans. For example, in Detroit, the rate of residents participating in city-sponsored recycling programs is at less than 30 percent of homes, according to Detroit City Councilman Scott Benson.

“As Black people, the environment has not always been something we have focused on. The message typically comes from people who don’t look like us,” says Benson.

A native of Southern California, Benson grew up with a strong interest in nature and the environment. He’s served as a staunch advocate for sustainability in city government since 2014. Benson currently heads the Detroit Green Task Force, which is made up of environmental advocacy groups, non-profit organizations, businesses, and residents.

The city of Detroit has also created a Sustainability Action Agenda which found them hosting over 100 community meetings, collecting data through over 1,000 surveys, and engaging citizens at town halls. According to Joel Howrani Heeres, the city’s director of sustainability, solar power is an important item on the agenda and the city is committed to streamlining the city’s solar permitting process, promote financial opportunities, and map potential solar sites around the city.

But the fact remains that rooftop solar units can top $15,000, and are available only to homeowners with the means to either take out a loan or pay the costs upfront. That leaves few options for most Detroiters who don’t fall into that category.

Most Detroiters are renters at 52 percent, according to a 2018 study by Rent Cafe, so upgrading to alternative energy is out of reach for them. Landlords may opt for solar, but have been slow to do so, especially in low-moderate income housing and subsidized housing. Yet nearly 60 percent of potential solar capacity in the United States resides in low-moderate renter-occupied and multifamily buildings.

Community solar — where people can “subscribe” to power from a solar array — may be a more valid option for some Detroiters, but the highly-contested issue is currently facing an uphill battle with the Michigan Public Service Commission.

DTE Energy has engaged lobbyists and various groups to fight community solar arrays that could power more than one home. Michigan Energy Promise and Michigan Energy First are both groups that are lining up advocates, many of whom are organizations of people of color, to present rooftop solar as detrimental to communities of color.

These tactics  have been denounced by the NAACP, which is advocating for solar power in urban communities through their Solar Equity Initiative. The initiative aims to provide solar job skills training, install solar panels on homes, and strengthen equity in solar access policies across the country.

The organization firmly supports community array solar programs as beneficial to communities of color. Through their Just Energy Policies and Practices Action Toolkit, the NAACP hopes to educate people of color on how to advocate for clean energy and energy justice.

A question of energy justice

Dr. Tony Reames is an associate professor at the University of Michigan Ann Arbor’s School for Environment and Sustainability. An expert in the field of energy justice, Dr. Reames is a multidisciplinary scholar with degrees in engineering and social science.

“Energy justice allows us to frame energy disparities across race, class, and place,” explains Reames, “The facts are this: We all pay the same rate for energy (in Michigan), but the rate of consumption is higher among low-income people.” And in Detroit, that largely means people of color.

Detroiters tend to consume more energy than their suburban counterparts because the housing they live in tends to be older and less energy-efficient, with less insulation and older appliances. This means that families have a higher energy burden, defined as the percentage of their income spent on energy. Detroiters are charged the same utility rates as their distant suburban neighbors, but because they make less income and consume more energy, the energy burden of Detroiters tends to be close 10 percent, while for more affluent suburbanites, it is only 2 percent.

DTE has created one path to solar through its MI Green Power Plan, however it is voluntary and feasible only for the most motivated and affluent customers. The company offers customers the opportunity to voluntarily pay higher electric rates to support DTE’s investment in wind and solar projects, “offsetting” up to 100 percent of their energy use. The program has been denounced by a free-market advocacy group as “overpriced and unnecessary.” Yet, it has gained a warm welcome in Ann Arbor, where affluent residents as well as the University of Michigan have committed to the program.

According to Jackson Koeppel of Soulardarity, a non-profit organization that works to expand access to solar energy in urban areas, community solar is a critical option for Detroiters.

“When you buy power from DTE, you don’t buy the coal plant, you buy the power. Solar only looks expensive because the expectation is that we essentially have to buy the power plant (the panel system) all up front,” Koeppel explains, “Community solar is critical because individuals can subscribe to a big solar system via their church or community center and get a bill credit.”

“DTE is working diligently to kill both of these options because solar is actually a more stable cost proposal than natural gas,” Koeppel explains, “and they want to limit access to it by forcing people to buy it all upfront.

Benson hopes a narrative change in the city around the importance of sustainable energy will empower citizens to advocate for energy choice. “Thirty percent of our population is at or below the poverty level, so we would have to find the capital and credit to make solar work in this city,” he explains.

According to Benson, marketing and increasing understanding about the benefits of solar power among low-moderate income communities and people of color has the potential to  create more families like the Summers’. Their initial investment could spark an energy revolution in their neighborhood.

For Summers, it wasn’t necessarily an easy decision, but it was the right one.

“It’s always scary when you are walking into something new,” he says of his new solar panels, “But, I would tell other people, ‘Do your research. If you care about the environment, think about converting to solar power.'”

Biba Adams’ reporting was produced in partnership with the Race and Justice Reporting Initiative at the Detroit Equity Action Lab, a program of the Damon J. Keith Center for Civil Rights. This initiative is funded by the Knight Foundation, Ford Foundation and Community Foundations for Southeast Michigan

Biba is a longtime journalist whose work is fueled by her passion for people. With a background in arts and entertainment journalism, she has recently entered the community journalism space telling stories about her native Detroit. Her work has appeared in Model D Media, VIBE, and Ebony Magazine.