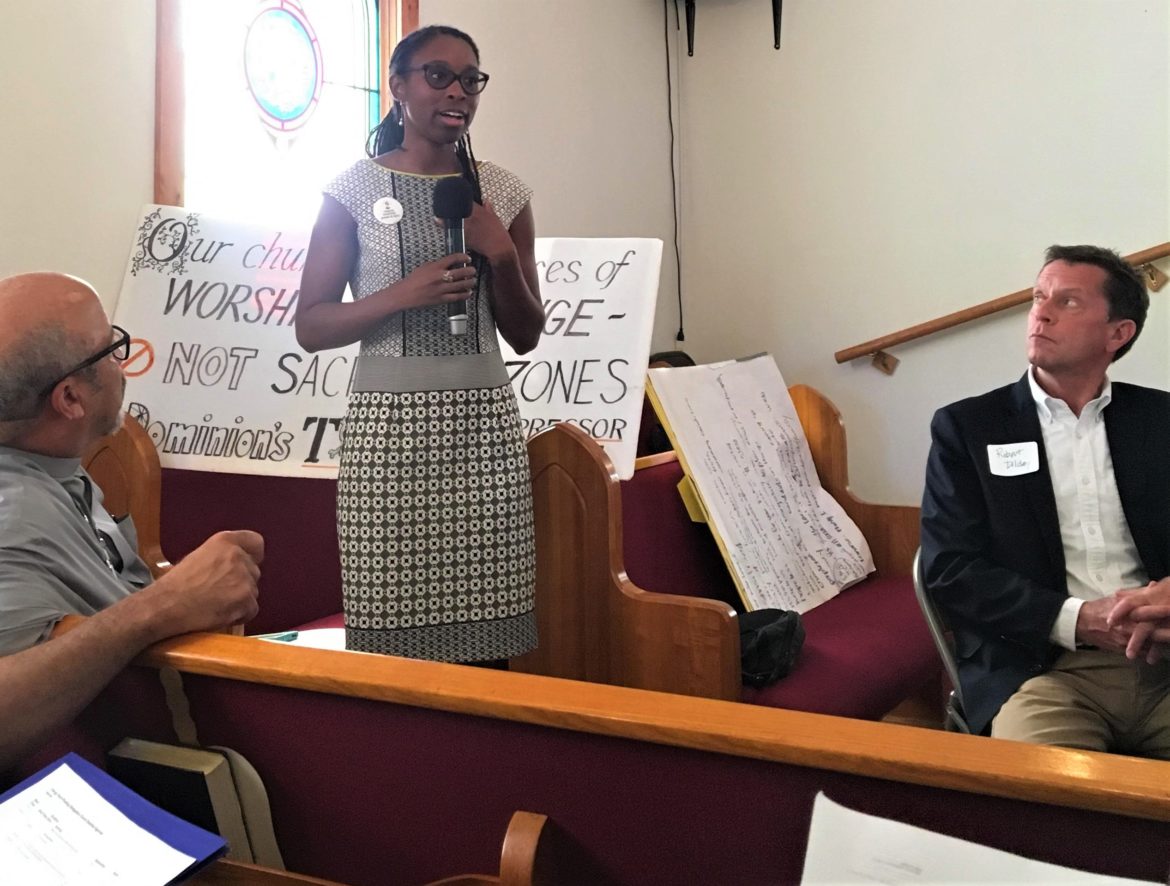 “We want environmental justice to become part of every breath we’re taking as a movement,” the Virginia Interfaith Power & Light director says.

Before Kendyl Crawford began her freshman year at Hampton University, she asked fellow students what was on their “must-pack” list.

“Rainboots,” they all replied. And that was 11 years ago. The historically black university was often flooded because the campus is on a coastal Virginia peninsula particularly vulnerable to sea-level rise. It’s where the Chesapeake Bay meets the Atlantic Ocean, so residents of Hampton and neighboring Newport News, Norfolk and Virginia Beach often wade through the realities of climate change.

Today, Crawford still has her boots on. But the 29-year-old Hampton native is 115 miles south, in Richmond, leading an effort to educate Virginians about the nexus of environmental justice and climate change. In her 18 months as the director of Virginia Interfaith Power & Light, she’s advancing a piece of the climate change conversation that has lagged behind.

Her nonprofit, formed in 2004 and relaunched in 2015, is a state affiliate of the national Interfaith Power & Light. It’s dedicated to mobilizing a religious response to climate change through energy conservation, energy efficiency and renewable energy.

The affiliate is under the broader umbrella of the Virginia Interfaith Center for Public Policy. It serves more than 200 congregations and faith communities in all regions of the state except northern Virginia, which is linked to a separate chapter.

Although Crawford’s group is nonpartisan, its supporters are tracking how and if Gov. Ralph Northam, a pediatric neurologist, follows through on his promise to address social, racial and environmental wrongs after he was caught up in blackface scandal in early February that rocked the state. The Democrat was elected to a four-year term in November 2017.

He failed one such test earlier this month by not vetoing language Republicans inserted into the state budget to prevent Virginia from becoming the first southern state to tap into the Regional Greenhouse Gas Initiative.

RGGI is a market-based cooperative effort in the Northeast to cap and reduce carbon emissions from fossil fuel-fired power plants.

“That was a very big disappointment because Northam touted his commitment to the environment and health during his campaign,” Crawford said. “We have been encouraging people to tell the governor that his leadership is very important on this issue.”

In an interview with the Energy News Network, Crawford shares more about her mission.

A: I was glued to the TV watching Hurricane Katrina unfold in 2005 when I was in high school. I watched people left behind on rooftops, waiting for a helicopter rescue.

Those images haunted me. I realized our society really has a long way to go in being equitable for all people. And even though folks don’t think about the environment a lot, I realized the connection between people and the environment on which we depend. That became part of my consciousness.

Q: After college, you delved into all levels of work on climate change in your home state. What guided you to Virginia Interfaith Power & Light?

A: I joined its steering committee when the organization was run by volunteers, before any full-time staff was hired. This is a place where I can bring my whole self to work. What resonated is being able to say we should take care of creation because it’s what we are called to do.

I’m a millennial and it’s the spiritual but not necessarily the religious that’s important to us. In this role, I’ve learned that having faith doesn’t necessarily mean you are religious or are going to church every Sunday. There’s a much broader way of living as a person of faith.

The big role that faith has with the big challenge of climate change is our ability to see that there is a vision and hope that we can solve this problem by working together.

Q: Last year, the Virginia General Assembly approved legislation that declared adding 5,000 megawatts of solar and wind energy to the grid over the next decade to be in the public interest. Why does the transition to renewable energy matter to your organization?

A: Nationally, our organization started when Episcopal churches came together to purchase solar panels. So, our roots are in cleaner energy, but the founders had it in their hearts not to stop there.

Every faith, at its core, has a call to care for creation and the planet. Climate change is exacerbating issues such as clean water, conflict, sickness, immigration and refugees that people of faith have worked on for a long time.

Often climate change is seen as an environmental issue. We want to broaden the understanding that it’s a moral issue of how we treat our neighbors.

Q: Faith groups tell policymakers that they have a moral responsibility to address climate change and provide access to clean energy, air and water across the racial and socioeconomic spectrum. How does that happen?

A: At Interfaith Power & Light, we see ourselves as being faith based and science motivated. We try to live up to the calling to live out our faith principles, which means raising up justice issues that aren’t on folks’ radar screens.

What shows up in the work we’re doing is thinking through is how we can be good allies with those that can’t always care for themselves, those without power and those left behind.

Our society is founded on different principles that shaped power to ensure that only small groups of people had access to power. Today, that means the work we’re doing has a long historical context. Whatever climate solutions we embrace, we need to make sure low-income people, people of color and children — those often the most impacted — are at the forefront with solutions.

Q: Are there any significant breakthroughs?

A: One step forward is a collaborative involving academia, green organizations and policymakers tasked with exploring how we can make Virginia a more environmentally just place.

Virginia is in the beginning stages of an environmental awakening at that level. Unfortunately, there’s a lot of education work still to be done. This exact topic is what I spend a lot of time talking about.

We want environmental justice to become part of every breath we’re taking as a movement. Our hope is to encourage those impacted by environmental injustices to tell their stories to decision-makers.

Q: Environmental justice is becoming a more familiar term. Can you help to define it by talking about one example in Virginia?

A: Justice is more of a centerpiece issue now that our national organization has recently revamped its vision, mission and values.

Our involvement with Union Hill, where the State Air Pollution Control Board approved a compressor station for the Atlantic Coast (natural gas) Pipeline in January is an excellent example because what we’re talking about is environmental injustice.

We are touched by the spirit of this community in Buckingham County and how people of faith were out in front in resisting the station and the pipeline. Our organization helped to organize prayer vigils before the air board vote.

Clergy and religious leaders are calling for cleaner energy that promotes life instead of destroying health and causing turmoil. All of us continue to stand with the community.

Q: I know yours is a non-partisan organization, but let’s talk about the optics of Union Hill. Dominion Energy was granted approval to build a key piece of infrastructure in a community that free blacks and former slaves settled after the Civil War. Also, Northam switched out two anti-station members of the air board before the long-delayed vote.

A: Union Hill is being saddled with an environmental burden that’s not even needed and that is exacerbating climate disruption.

We have a long marathon to run in the transition to clean energy and we’re starting to run in the opposite direction by building natural gas pipelines and our continued dependency on fossil fuels.

Read more: A sunnier view for Atlantic Coast Pipeline opponents — but will it last?

With all of the power Dominion has comes a moral responsibility to be a good corporate ally. That includes considering issues like environmental justice.

Q: Then again, Northam negotiated an unprecedented deal for Dominion to clean up 27 million cubic yards of coal ash at four sites. What’s your perspective?

A: We’re happy that this long-overdue cleanup is being addressed, but our concern is that the fiscal burden will fall on the ratepayers. Dominion should pay for it because they made the mess.

Of course, this solution only looks at coal ash in the Chesapeake Bay watershed, not the rest of the state.

Q: Does your group have a strategy to advance the Regional Greenhouse Gas Initiative after the budget setback?

A: With the November election approaching, we’re striving to educate folks about how we need decision-makers that will stand for caring for creation.

That’s what will allow us to claim Virginia’s potential role as a climate leader in the South.

(Editor’s note: All 140 General Assembly seats will be on the ballot and Republicans have a narrow majority in both chambers).

Q: In January, Northam followed the initiative of the previous governor, Terry McAuliffe, by signing an executive order to establish a Council on Environmental Justice. Does this merely look good on paper?

Two members of our steering committee are on the council and it’s an opportunity for their voices to be heard. At the same time, the council still doesn’t have a budget and it isn’t codified under state law.

One related and exciting development is that the Department of Environmental Quality is seeking bids for an environmental justice study. That could help us identify potential hotspots statewide.

Q: As Virginia moves away from fossil fuels such as coal, miners will likely be displaced. Should Virginia worry about integrating them into a different workforce?

A: That’s also a justice issue worthy of the same amount of attention. This is not just for those experiencing sea level rise. I would love to have more staff so we could reach out to communities in southwest Virginia to ensure that this is also a priority for decision-makers.

Q: Soon, Dominion and Orsted are on track to install a 12-megawatt pilot offshore wind project near where you grew up. Is that a surprise?

A: That’s what the future is going to look like. It’s very exciting. My great-grandfather worked in an area shipyard. Offshore wind is a great economic opportunity for the folks in Hampton Roads. There’s the potential for lifelong jobs that can’t be outsourced.