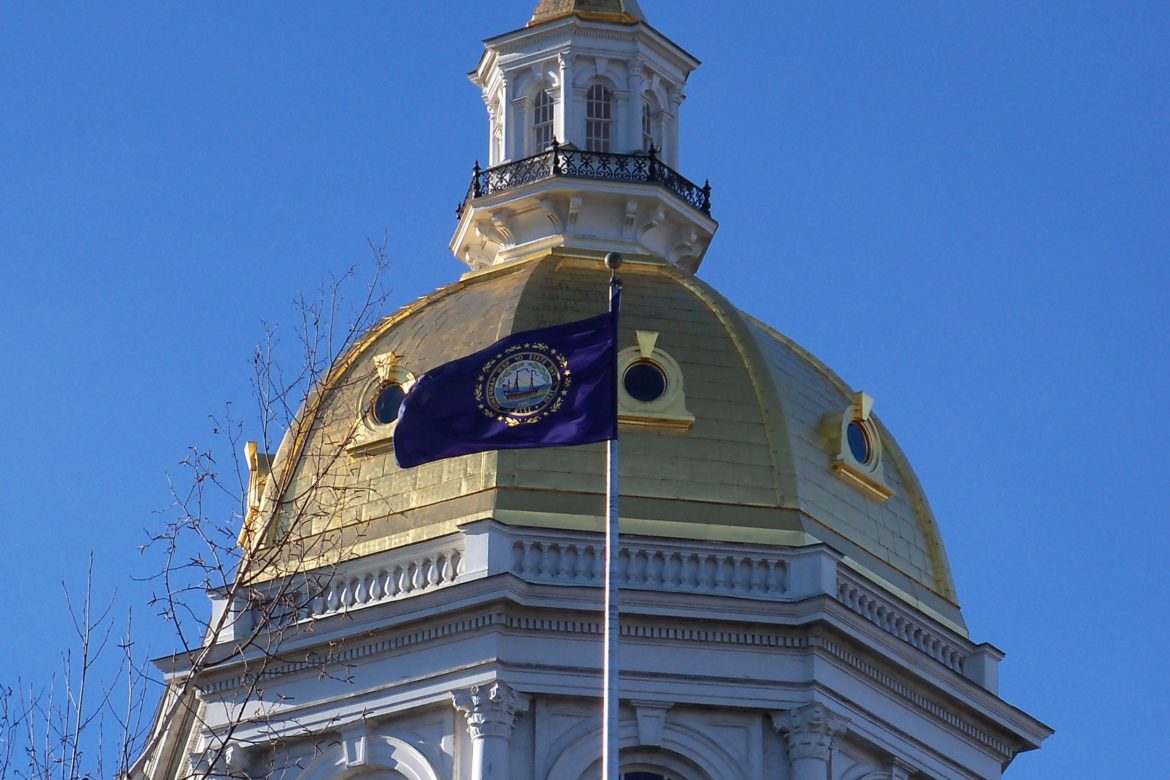 The state flag of New Hampshire flies outside the Capitol in Concord.

Legislators are expected to vote on a veto override for a bill that would expand net metering to larger projects.

New Hampshire Democrats will soon have a chance to flex new majorities in the state legislature to override a veto of a bill to expand solar net metering.

“I think this is a good barometer of the readiness of our state to declare we are open for clean energy business, or we’re not,” said Dan Weeks, director of market development for developer ReVision Energy.

Gov. Chris Sununu vetoed a bill on June 3 that would have increased the state’s cap on net-metered solar projects from 1 megawatt to 5 megawatts. The bill (HB365) had passed in the House 254-98 and in the Senate by voice vote.

Sununu, who vetoed a similar measure last year, said in his veto message that the bill is “a regressive cost burden on all citizens that benefits large-scale solar developers while hurting all ratepayers.”

Supporters say the legislation would encourage larger commercial and municipal projects in the state. The bill was part of an aggressive clean energy program pursued by Democrats after taking majority control in both houses.

A veto override vote is expected, but a date has not yet been set.

Madeleine Mineau, executive director of Clean Energy NH, worries that lasting damage to the state’s reputation may have already been done.

“The governor’s veto … sends a negative message to the solar industry that New Hampshire is not a welcoming place for the significant investments and well-paying jobs that this industry would like to bring to our state,” Mineau said.

If the veto override fails, Mineau expects solar development to continue in the state as a slower pace and primarily for very small projects. The options will continue to be limited for larger energy users, though.

New Hampshire significantly trails neighboring states in solar deployment. Solar accounts for about 10% of in-state generation in Massachusetts, 12% in Vermont, but just 0.5% in New Hampshire.

New Hampshire’s Business and Industry Association supports the governor’s veto, saying that it would be unfair to other customers without net metering.

“To be clear, BIA does not oppose raising the cap on net metering. We support an ‘all of the above’ approach to help meet the energy needs of businesses across the state,” BIA President Jim Roche said. “However, we oppose HB 365 because the legislation would result in cost-shifting to the business community since the tariff (or credit) given to net metering customers would be above the utility’s avoided cost. That’s unfair to all non-net metering ratepayers.”

Advocates note that distributed solar has multiple public benefits and studies have placed its value far above the avoided cost (wholesale) rate, and in some cases even above the retail rate for electricity.

One difference in this year’s version of the bill was an attempt to address the cost-shifting complaint by requiring utilities to use the net-metered energy in local operations before buying power from the wholesale market.

Other clean energy bills advocates are watching include an increase in the state’s renewable portfolio standard to 60% by 2040, a law enabling community solar projects and a carve-out of 5.4% solar energy for the state by 2025.

“We are very determined to get New Hampshire to join our neighboring states in building the clean energy transition to address the undeniable climate crisis,” Weeks said.