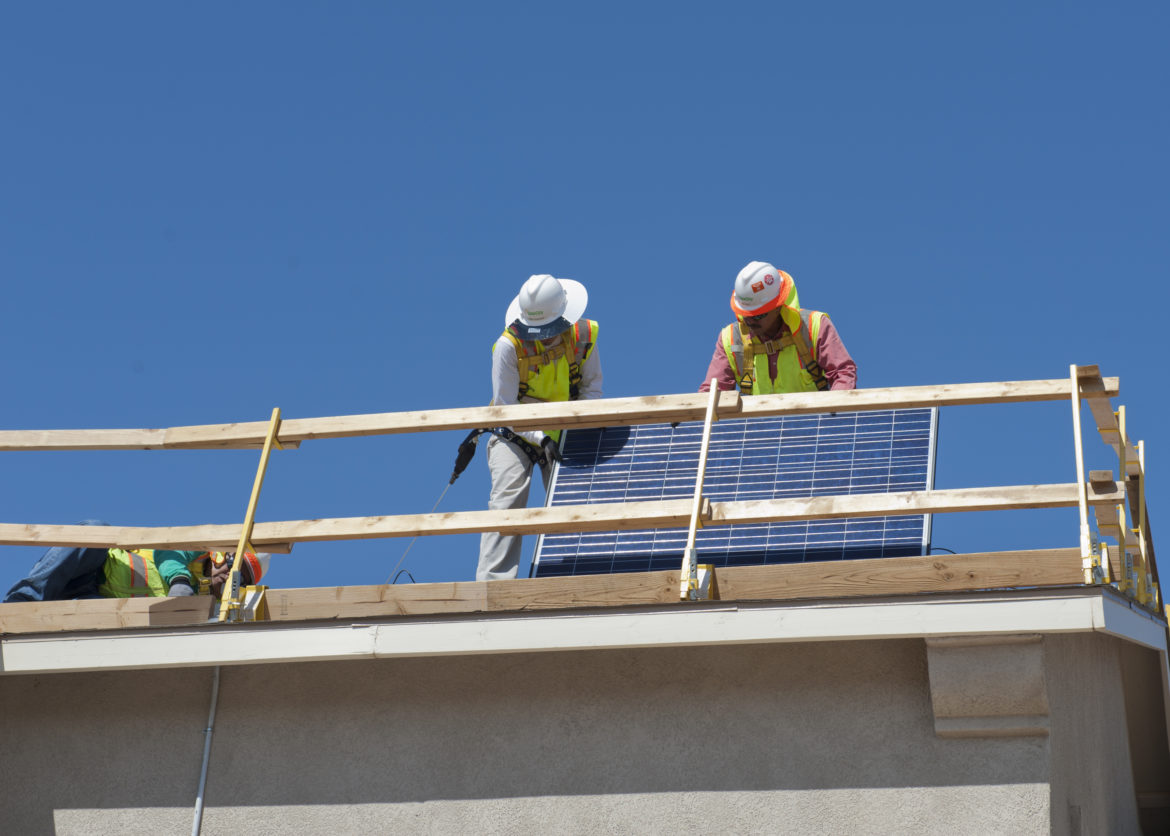 The village of Kildeer northwest of Chicago promotes itself as a place of spacious lawns, leafy streets, and “picturesque ponds and lakes.” The median home value exceeds half a million dollars. Fences and aluminum siding are not allowed. And, as some residents have recently found out, nor are rooftop solar panels.

The village’s volunteer architectural committee has told several residents seeking needed approvals for rooftop solar that panels are not an approved roofing material.

Solar has been a hot topic during at least one recent village board meeting, where village officials cited concerns from some residents who don’t want to see solar panels and worried that the panels could degrade property values and damage the aesthetics of the neighborhood, which has been “carefully and thoughtfully guided” since its founding in 1958, as the village website says.

Several residents and solar developers are trying to convince village officials to allow rooftop solar and draft guidelines regulating it. Chief village officer and building commissioner Michael Talbett indicated that while solar shingles and ground-mounted solar would likely be acceptable, rooftop solar may not fit with Kildeer’s image.

“The village does not allow vinyl or aluminum siding on the exterior of homes,” he said. “We don’t allow fences. That’s a restriction on some people’s free enjoyment of their property. Solar panels are not seen as being very different from those items. So not every resident will be able to do everything they would like to do with their property, but it’s not an arbitrary decision.”

Solar developers and residents interested in solar said they plan to attend the next board meeting June 18 and raise the issue, though it is not on the agenda.

Kildeer village board members and the chair of the volunteer architectural board did not return requests for comment.

Charles Yoo planned to install a 7.8-kilowatt, 26-panel system on his home and signed a contract with GRNE Solar, based in the nearby suburb of Palatine, only to have the plan go “belly up” this year when the village architectural board refused to grant approval.

Yoo explained, and documents confirm, that the village architectural board denied his requests for needed approval because they worried even panels planned for the back of his home with little visibility would set a precedent “that could lead to others requesting panels on all sides of a home including the front,” as an architectural committee form noted.

“The aesthetics were irrelevant — it would be black on black,” both cells and framing, said Yoo, who advises medical centers on proton therapy systems. “What it came down to is that this might pass the aesthetic test but they weren’t prepared to deal with the next permit that was front-facing.”

Yoo said he doesn’t think ground-mounted solar or solar shingles are a cost-effective option for his property, citing a 2017 Consumer Reports story showing Tesla solar shingles might have a payback time longer than 30 years.

“The technology for these things is evolving very quickly,” Talbett countered. “Besides the Tesla roof there are five other companies now that make integrated shingles. The board has said very clearly if people would choose that option, there would probably be no prohibition because it would be in line with the aesthetic values the board and village has been trying to achieve all along. I think [solar] is technology that will probably be incorporated into houses being built from now on, but it will improve to the point where it won’t stick out.”

But Yoo and others seeking solar in Kildeer said they don’t have time to wait, since they want to qualify for the federal investment tax credit for residential solar that is ratcheting down and expiring after 2021. Residents also hope to reap incentives under Illinois’ Future Energy Jobs Act.

“We pay a lot in taxes to live in Kildeer — Kildeer is doing us a disservice by not allowing us to use federal and state incentives to install solar on our house,” said Silvia Pelayo, 33, who along with her husband Michael Dadouche, 34, signed a contract with Tesla for a 10-kilowatt rooftop installation with two Powerwall batteries, contingent on needed approvals.

Pelayo and Dadouche, who is in the tech industry, moved to Kildeer after living in California for five years, where they observed how “solar has exploded,” Dadouche said.

“When we were looking at moving back to Illinois, part of the discussion we had was that Illinois is starting to really support solar and progress in that direction,” Dadouche continued. “It wasn’t until actually submitting our proposal to take it to the next step that we found out Kildeer is one of the only communities in the whole state holding off on approval.”

Talbett said village leaders have been involved in Lake County’s efforts to draft a model solar ordinance, and may consider customizing that ordinance once it is done.

GRNE Solar CEO Eric Peterman said he has been telling village officials that the company could help draft rules that will address concerns about solar while making it an option for residents, as the company has done in other local jurisdictions.

“Our biggest thing is just trying to have a conversation about why they’re so closed off — what can we do to help you form the right solar policy so it’s good for your residents and allows people to do solar if they want?” he said. “We know there are concerns, but what can we do to put a proper ordinance in place to protect against those concerns and make sure people can do solar? We’re trying to help them, we’re trying to do the legwork, and they’ve just been completely closed off. I’m just not sure what their deal is.”

GRNE Solar cited a Zillow study showing a 4.1% increase in property values on average nationally for homes with solar. GRNE noted that with Kildeer’s median home value, solar would add a predicted $23,000 in value based on the Zillow study.

“In terms of aesthetics I don’t look at a house and say, ‘That’s ugly,’ I say, ‘They have solar, that’s really cool,’” Dadouche said. “I think that’s what most people do.”

GRNE also provided the board with a list of nearby suburbs with home values even higher than Kildeer’s that are part of the Department of Energy’s SolSmart program providing technical assistance to facilitate solar. The list includes the suburbs of Winnetka and Glencoe, tony lakefront suburbs north of Chicago with median home values around $1 million. GNRE also notes that Kildeer is a proclaimed “Tree City” that values its foliage, and that each 7 kilowatts of solar installed sequesters the equivalent carbon dioxide of more than 200 trees.

In his appeal, Yoo said allowing solar would be in keeping with the village’s slogan, “A Unique Village in a Natural Setting,” “because it will support nature while not maintaining the negative uniqueness of being one of the extremely few communities not embracing solar.”

“They pride themselves on maintaining a wooded area, being an arbor city, trying to keep a rural environment and certain standards,” Yoo said. “But this decision goes against those ideas.”