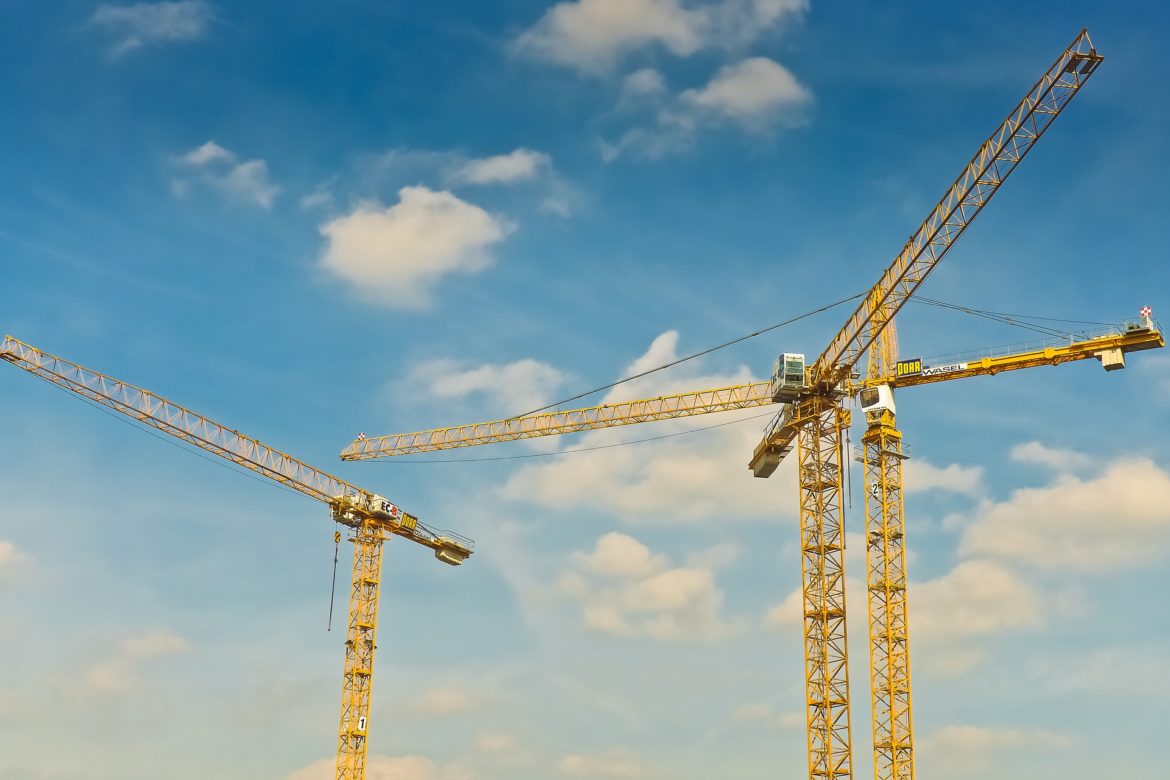 A trio of cranes tower over a construction site. Minnesota lawmakers have expanded a clean energy financing program, which was originally designed to help fund retrofits for existing commercial buildings, to now include new buildings as well.

The administrator of a Minnesota clean energy financing program expects hundreds of millions of dollars in new projects to qualify thanks to changes signed into law last month as part of a state budget deal.

Peter Klein, vice president of finance for the St. Paul Port Authority, the state’s largest PACE program administrator, expects a significant increase in activity as a result of the changes, which put Minnesota more in line with other states.

Nationally, new construction represented more than 70% of commercial PACE lending in 2018, according to PACENation, a national nonprofit advocate for the financing tool. The Port Authority along with PACE Loan Group and Clean Energy Economy Minnesota lobbied for the change.

Property assessed clean energy allows building owners to pay back loans they use for energy efficiency upgrades and renewable energy investments via their property taxes. The money that taxing authorities collect is remitted back to finance companies that provide the initial loans.

Minnesota has one of the oldest and most successful such programs, ranking fourth nationally despite being limited until now to building retrofits. The likely first commercial PACE loan for a new building will be for a 125-unit senior housing project in Monticello, about 40 miles northwest of Minneapolis, Klein said.

Energy-related equipment tends to make up about 10% to 15% of the cost of a new building, Klein said. When developers look to cut costs, they often look to cheaper heating and air conditioning systems. PACE gives them another option. “This will allow new construction to have more efficient energy systems,” he said.

Benjamin Stafford, director of policy and public affairs for Clean Energy Economy Minnesota, said it was not hard to find bipartisan sponsors in both the House and Senate for the PACE bill.

“For an already successful program, those two changes are significant,” Stafford said. “We had strong support from our members for the changes.”

Rafi Golberstein, CEO of Minneapolis-based PACE Loan Group, said his company will lend between $10 million and $12 million in PACE loans to developers of new buildings in Minnesota.

Building owners use the money for LED lighting, high-efficiency heating and air conditioning equipment and better-than-code building envelopes, he said. When finished, the buildings will have a value of $100 million to $140 million.

“Those are the easy targets,” Golberstein said. “The goal of PACE is to say, ‘Hey, if you’re going to build a new 10-story office building, don’t go buy the cheapest equipment that meets code. Spend more money to buy something that is truly efficient, and we’ll help you pay for it.’”

The new legislation also allows loans to be based on the appraised value of a property instead of an assessed value. Minnesota was the only state in the country to use assessed rather than appraised value.

Tax values on undeveloped properties where new buildings will be constructed “tend to be incredibly low,” Golberstein said. Undeveloped land might have an assessed value of $1 million prior to construction of a $50 million office building, Golberstein said. Based on the assessed value of the land, PACE could finance just $200,000 in energy improvements to a new building.

The change in the law now makes the office building eligible for millions of dollars in PACE financing. “That is the crux of the whole issue, and that’s how new construction can now work” in the PACE program, Golberstein said.

Minneapolis-based clean energy attorney Jeremy Kalin was one of two legislators who crafted the state’s original PACE legislation a decade ago. Initially, the law built in safeguards for residential PACE projects by only allowing tax assessments, he said.

“We wanted to limit the size of the PACE assessment on someone’s home,” said Kalin, of Avisen Legal. But he and other legislators did not anticipate the level of business interest in PACE. The new legislation reflects that interest.

“This small change will result in a lot of higher performance buildings and a lot less energy waste baked into buildings,” Kalin said.

Using the appraised value of a new property offers building owners a large enough PACE loan for them to pursue Leadership in Energy and Environmental Design (LEED) certification from the U.S. Green Building Council or higher Energy Star ratings from the Environmental Protection Agency, he said.

The Port Authority recently added $10 million in commercial PACE money that will be used for smaller projects between $50,000 and $250,000, a level too small to attract the interest of other PACE lenders, he added. The funding comes from CU Green, an initiative Kalin developed with the Minnesota Credit Union Network. CU Green also has a residential solar lending program.

A few barriers still exist to continued commercial PACE expansion, Klein said, but the biggest may still be lack of awareness, which is why he plans to spend time in the coming months getting the word out about the changes. “We’ll be getting out more and talking more about the program,” Klein said.