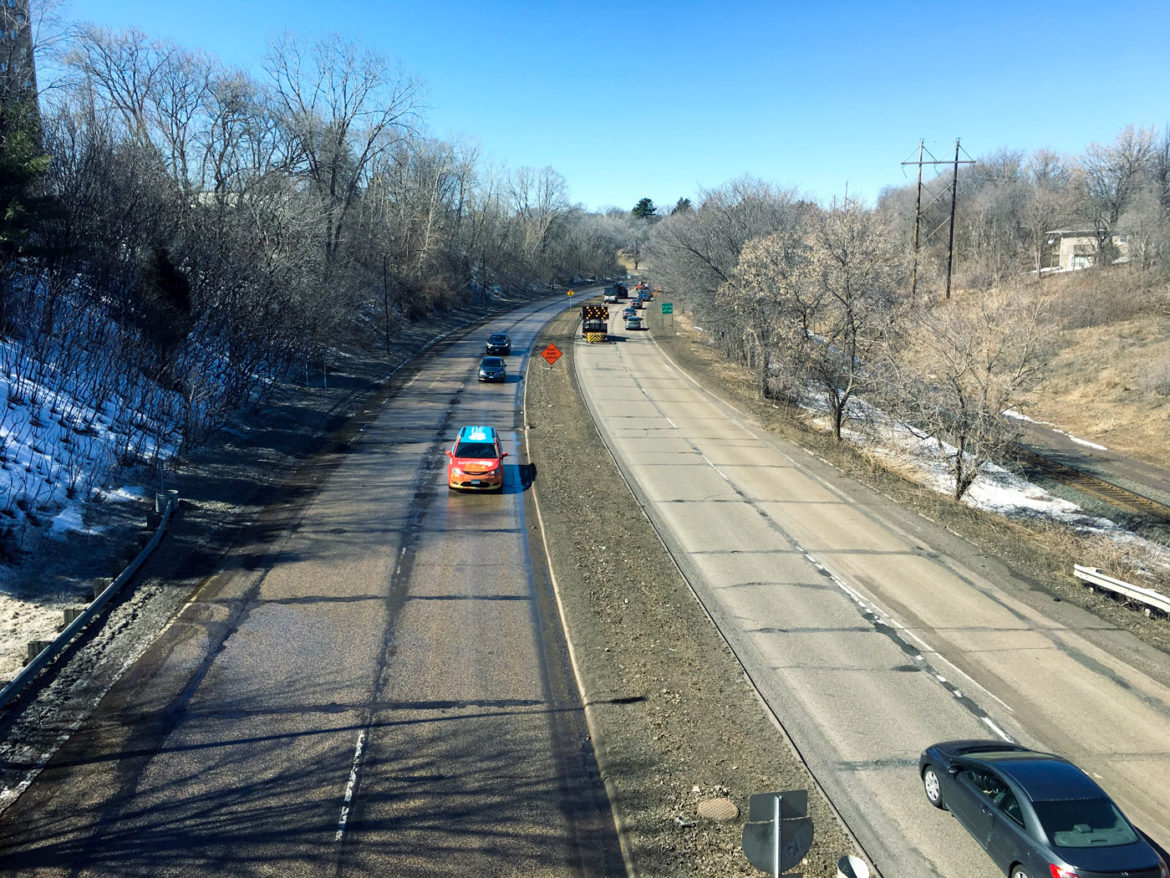 As St. Paul, Minnesota, looks to a future where citizens are less dependent on driving, advocates say a recent decision to repave a notoriously pothole-strewn highway shows how difficult the status quo will be to overcome.

At issue is Ayd Mill Road — a four-lane road along a railroad corridor that has become a popular commuter shortcut since being connected to Interstate 35E in the 1990s. The city-owned road, which roughly forms a triangle between I-35E and Interstate 94, has for years been a point of contention among officials who want to use it to link the two freeways, scale it back as a local parkway, or remove the road entirely. In 2009, the city voted to convert the road to two lanes, but the plan was never implemented.

Ayd Mill Road was due for mill and overlay — in which two inches of asphalt is ground off of a street and replaced with two inches of new asphalt — in 2021, but the work is now scheduled for this construction season. The project will span two miles of road and cost $3.5 million, which is more than a quarter of the city’s street reconstruction bonds. And because the road was built on a stream bed, the fix may not last for a typical lifespan of 15 years.

For transportation advocates, this investment in Ayd Mill Road is misplaced.

“I’m not saying that we shouldn’t maintain our infrastructure, but where we put our money matters,” said Jessica Treat, executive director of Move Minnesota. “[The budget] is limited and then a big chunk of it gets taken out by projects like Ayd Mill. That’s not really doing anything for transit, biking or walking, because none of that runs in that corridor.”

Ayd Mill Road is a symbol of the challenge cities face in meeting climate goals while still accommodating drivers. Transportation is the greatest greenhouse gas emitter nationwide, and reducing driving could cut these emissions. But investing in auto-centric infrastructure can encourage more driving.

Some cities, seeking to reduce the impacts of automobile traffic, have removed freeway sections entirely — including Portland, Oregon; San Francisco, and Milwaukee. St. Paul is among many cities implementing “road diets,” reducing lanes to improve safety and encourage other modes of transportation.

St. Paul’s twin city of Minneapolis reduced driving by 2% between 2007 and 2016 despite adding 30,000 new residents. The city managed to do this by investing in protected bike lanes, pedestrian infrastructure and denser housing.

In 2011, Minneapolis adopted its Master Bike Plan, which has since streamlined the building of more than 70 miles of bike lanes. By increasing safe and accessible bike infrastructure, the city has doubled its percentage of bike commuters since 2006. Five percent of commuters in Minneapolis now bike to work, the third most of any major U.S. city.

Since 2010, Minneapolis has become more dense, which can reduce driving by placing residents closer to work, school and transit. Sixty-four percent of Minneapolis residents live in walking distance of frequent transit. “Minneapolis has been building a lot of housing in the walkable core areas — specifically downtown Minneapolis and around the University of Minnesota … all the areas where you have walkable jobs, grocery stores, transit and people who can live and thrive without having to drive,” said Bill Lindeke, an urban geographer and writer who has blogged extensively about Ayd Mill Road.

In December, the City Council approved the Minneapolis 2040 Plan, which outlines the city’s plan to become even denser and less car-reliant. The plan will allow multifamily homes in the city’s residential neighborhoods and four-story buildings in transit corridors. It also eliminates parking minimums for apartment buildings and bans new drive-throughs and gas stations citywide.

St. Paul has included many of the same tactics in its Climate Action and Resilience Draft Plan. But a decade-old road diet plan for Ayd Mill Road has never been implemented.

Despite the resolution, no action has been taken for the past decade. “The council didn’t really have any ability to do much more at that point and Mayor Carter’s administration sort of inherited this issue,” Stark said. “I guess the deterioration of the roadway was further along than we had realized. So yeah, we’re trying to figure out how to responsibly take the next steps for what should happen out there. In an ideal world, we would have figured that out a bit sooner, clearly.”

St. Paul spends more than $45 million annually to maintain its roads. From filling potholes to mill and overlay, this money can get tight. In December, St. Paul passed, for the first time, dedicated funding for bikeways. The city allotted $500,000 in ongoing funding for bikeways and $1 million for improving sidewalks.

The $3.5 million the city is spending on Ayd Mill Road comes in part from money that was freed up after a street project was rejected by residents who were opposed to building sidewalks. The money was still required to be used for city infrastructure and, as the fund became available on such short notice, there wasn’t much time to do the public outreach that usually precedes a construction project.

To some extent, St. Paul’s options on where to spend this money were limited. But there are plenty of city-owned residential streets, which carry buses, bikes and pedestrians, that could have benefited from these unexpected funds, some residents say.

“The money that we’re talking about here is money that is supposed to be used for street maintenance in the city,” Lindeke said. “And there’s a hundred projects that are in the queue … either arterial streets or residential streets that desperately need maintenance.”

St. Paul’s Climate Action and Resilience Draft Plan, published in April, says that the city aims to reduce driving by 2.5% annually until 2050. For Lindeke, this is a laudable goal, but continuing to invest in auto infrastructure won’t help the city achieve it: “The city’s transportation status quo is not going to bring us to the goals that are in the new climate action plan or even close to it.”

As for Ayd Mill, the upcoming mill and overlay does not preclude plans for reducing lanes or adding bike or pedestrian infrastructure to the road. According to Stark, the city is still considering its options, but they will not be included in the upcoming construction.

“Because of the configuration of the road, it’s going to take both some design and engineering work and then some additional resources to do that work that weren’t available at this time,” said Stark. “So the intent is to pursue that as a project whatever that ends up looking like in 2020.”