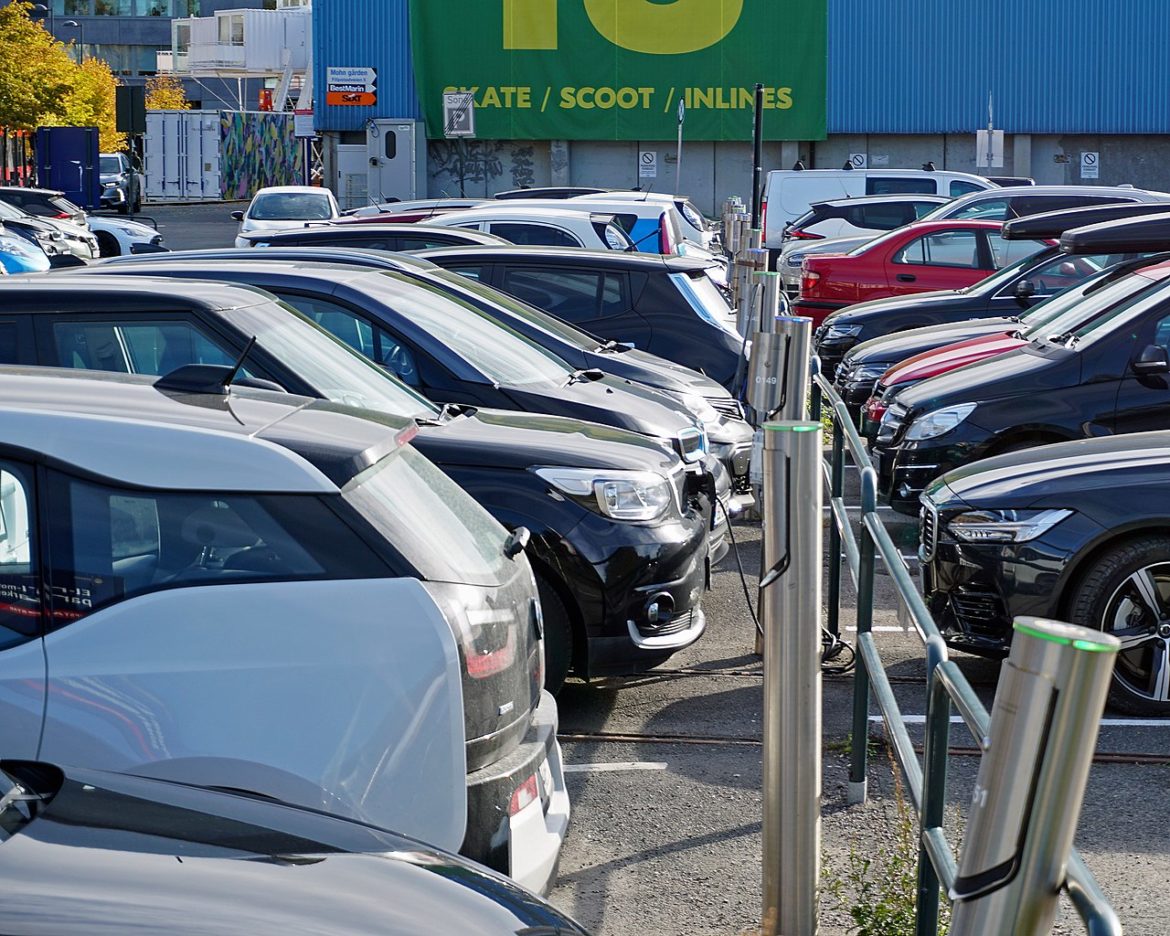 Electric cars charge in a parking lot in Oslo, Norway.

Mobile Skøyen, a Nissan dealership in the Norwegian capital of Oslo, offers a full range of the automaker’s vehicles, from sedans to compact SUVs.

Outselling them all: the all-electric Nissan Leaf.

About 95% of the cars bought from Mobile Skøyen are battery electric vehicles, and most of those are compact Leafs.

In Norway, this dealership is not alone. Electric vehicle sales are soaring in the oil-exporting Nordic country. In March, electric vehicles outsold gas and diesel vehicles for the first time, accounting for 58% of vehicle sales — twice the share from the previous March. The numbers are even higher in Oslo. Take a casual walk through the city and it is hard not to notice the Leafs, Teslas, and Volkswagen eGolfs cruising the streets.

As Massachusetts looks to put more drivers in electric vehicles, Norway’s transition from fossil fuels in transportation offers potential lessons for the state.

“It’s all about the money,” said Karim Elatyaoui, a salesman at Mobile Skøyen who estimates he sold 450 Leafs last year.

Norway’s surge in electric vehicle adoption is widely attributed to a generous package of financial incentives that make going electric not just feasible, but financially advantageous.

The country’s incentives began nearly 30 years ago, with the elimination of the purchase tax — a variable fee based on the weight and emissions of a vehicle — for electric vehicles. In 2001, the government sweetened the deal by exempting electric vehicles from the 25% value-added tax charged on new vehicle purchases.

Even with higher base prices for electric models, these exemptions add up to savings. An eGolf, for example, has a base price about $12,500 higher than the conventional Golf. But when taxes are added, the gas-driven version costs about $900 more than the eGolf.

“The economic reason is probably the most obvious one for wanting an electric car,” said Mobile Skøyen manager Jacob Moer Aanonsen.

Owners of electric vehicles also get ongoing financial perks. Until recently, road tolls, ferries, and municipal parking were all free for electric vehicles; going forward, electric vehicle drivers will pay, but their fees will be capped at 50% of the full rate. And there are also fuel savings. Gas prices in Norway currently average the equivalent of about $7.40 per gallon; with Norway’s traditionally low electricity prices, charging is a far less expensive option than filling up.

These smaller, cumulative benefits have been an essential factor in electric vehicle adoption, said Unni Berge, spokeswoman for the Norwegian Electric Vehicle Association. In fact, her own mother made the switch to electric when new tolls came into effect in her town, she said.

Then there are the connected issues of range anxiety — the worry that an electric vehicle won’t be able to make it far enough for the driver’s needs — and charging infrastructure.

Range anxiety has diminished as electric vehicle technology has improved and consumers have become more familiar with the vehicles’ capabilities, Berge said. Still, more charging stations are needed to keep the momentum going, she said.

The first wave of electric vehicle buyers were more likely to be people who live in single-family or detached homes, giving them access to outdoor outlets or space to install a charging box.

“The main thing you do when you buy an EV is you charge at home,” Berge said. “You start every day with a fully charged car.”

As the electric vehicle market becomes more saturated, there is more need for charging options in public places and for apartment dwellers who have to depend on garage or street parking.

Norway is in the process of meeting the swelling demand. In 2015, the world’s first electric vehicle-only indoor parking garage opened, providing 102 parking spots and charging points just steps from Oslo city center; in 2017, another 100 spots opened up in a parking garage in a neighborhood north of the center.

Oslo has plans to build fast chargers on the corridors into and out of the country, and in some places the market has grown robust enough that private companies are building charging stations for their own financial gain, Berge said.

“This is quite a big infrastructure upgrade we are doing in Norway right now,” she said.

In 2014, the state launched the Massachusetts Offers Rebates for Electric Vehicles program (MOR-EV), providing rebates of $2,500 on the purchase of new electric vehicles. The program has been very popular: It was receiving $2 million in rebate requests each month by last fall and had issued a total of $28 million in rebates by the end of last year.

“It’s going to be hard for the state to meet its EV goals without a rebate,” said Larry Chretien, executive director of the Green Energy Consumers Alliance, which promotes clean energy use in Massachusetts and Rhode Island.

Chretien and others seem confident the administration of Gov. Charlie Baker wants to continue subsidizing electric vehicles, but they acknowledge the difficulty of finding a reliable funding source.

A potential funding stream could soon be the Transportation and Climate Initiative, an effort by nine northeastern states and Washington, D.C. to create a regional cap-and-invest system to reduce the impact of emissions from transportation sources. The program, however, is still in the planning stages and the ultimate outcome very uncertain.

“We need to find a sustainable source of funding to make EVs more affordable,” said Daniel Gatti, a transportation analyst in the clean vehicles program at the Union of Concerned Scientists in Cambridge, Massachusetts. “We need TCI to be successful and to get a lot of funding going to EVs.”

Expanding access to charging infrastructure is also important, and progress is underway in Massachusetts. National Grid has received approval for its plans to install more than 1,200 charging stations over the next three years and has submitted a proposal that would deploy another 17,000 in a five-year span. Eversource has plans to enable 3,500 new charging ports at 450 sites statewide; the utility will pay for all the infrastructure work and property owners or municipalities will pay for the charging devices.

The question that is hardest to answer, however, may be about culture: Will the logic of incentives and infrastructure be enough to change the ingrained American love of powerful cars and the personal freedoms they represent? The answer is, of course, maybe.

And hopefully, he said, growing awareness, efforts to improve charging infrastructure, and well-funded incentives will eventually add up to widespread change to the way we look at choosing a car.

“At some point, you reach the point where you really essentially change the market,” Chretien said.

Despite some American stereotypes that Europeans are more selflessly green than we are, many Norwegian drivers made the switch to electric reluctantly. Yet, even hard-core devotees of internal combustion engines have been won over. Elatyaoui remembers a customer who was so upset at giving up the gas-fueled vehicles of her past that she cried when he delivered her new Leaf. He saw her again a year later.