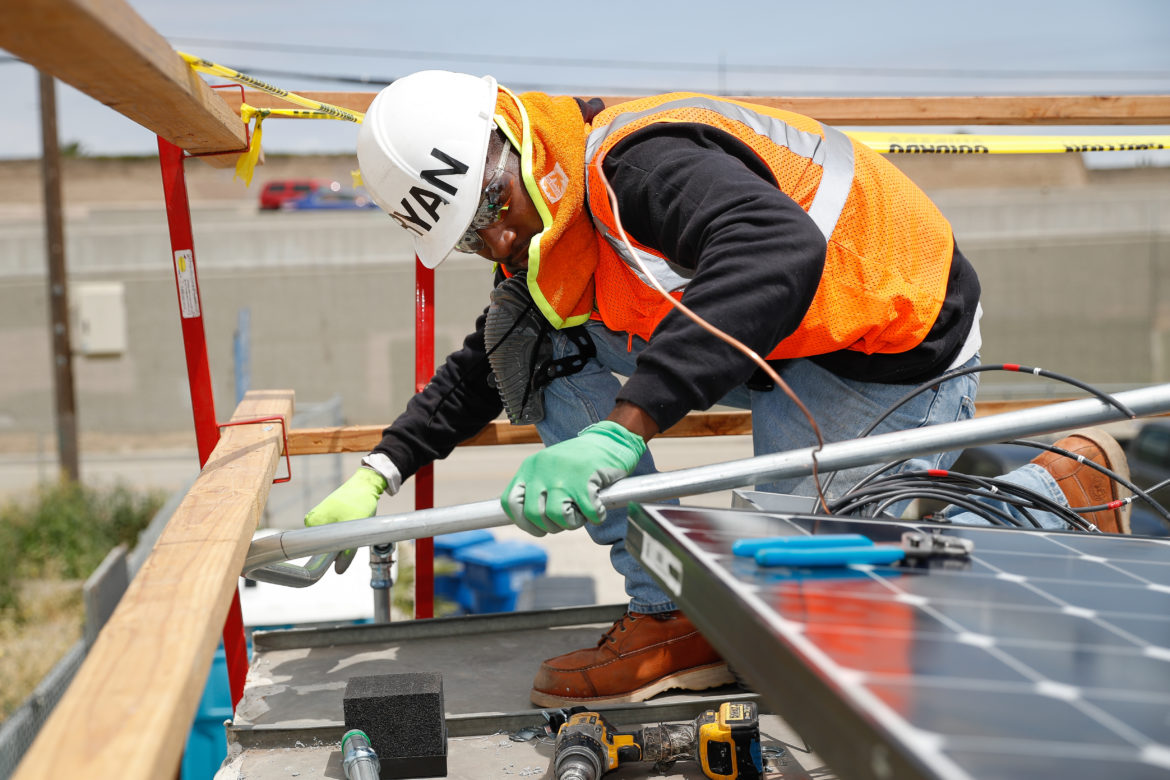 Ryan Shelton of Grid Alternatives fits a pipe during a solar installation in Los Angeles, California. Shelton, 23, discovered Grid Alternatives' SolarCorps fellowship program shortly after his release from prison and is now working toward an associate degree and certificate in electrical construction and maintenance from a technical trade college in Los Angeles.

Ryan Shelton made a mistake at 19 that cost him a year behind bars.

Now 23, Shelton might still be in a downward spiral if a southern California nonprofit hadn’t recruited him for a solar installer training program.

Instead, he’s installing solar panels on homes in Compton and Long Beach as part of Grid Alternatives’ SolarCorps fellowship program, a 13-month position.

“I raised my hand right away,” Shelton said of the moment he learned about the opportunity to learn the trade shortly after his release from prison.

Grid Alternatives’ program is still relatively small, having offered about 200 fellowships to people like Shelton, but other prison solar training initiatives and fellowships are popping up around the country.

The training and experience can be life-changing for participants, and because of racial disparities in prison populations, the programs are also helping the solar industry address workforce diversity gaps. A recent report by a pair of national solar industry groups called attention to the problem and recommended companies adopt more inclusive hiring and recruiting practices.

Still, a negative perception of felons within the solar industry — and society broadly — is a major barrier, according to Adewale OgunBadejo, a workforce development manager with Grid Alternatives in greater Los Angeles.

He oversees a team that helps individuals from marginalized communities find training and jobs in the solar field, and he built partnerships with groups like Homeboy Industries that work to reduce recidivism but don’t have experience in the clean energy field.

“We have to get [business owners] to see the humanity in people and help them understand that and these are just individuals who made mistakes,” he said. “They’ve paid their debt, and now they’re ready to get out here and do something.”

That’s why organizations like Grid Alternatives are funding workforce development opportunities within the industry. Some programs will even pay the salary of a formerly incarcerated person for a period of time, in the hopes that they can prove themselves to a company that will hire them on staff.

“The solar industry is a multi-billion-dollar industry, with a lot of investment,” OgunBadejo said. “We want to make sure that everybody has access to the opportunities. The only way to do that is to fund workforce development opportunities to get people from these same communities trained and then also hold employers accountable.”

For prison programs, ‘hiring is a stumbling block’

Since 2015, Richland Correctional Institution in Mansfield, Ohio, has operated a 12-week solar training program for inmates who will be leaving prison within the year. The hope is that the program will develop real-world skills that can translate into a position in the solar industry. The class includes time working on panels and other electrical devices.

Beginning in 2017, participants could also be certified through the Electronics Technicians Association. Now, the training is offered three times a year and is limited to about 20 spots. Beverly Baxter, who oversees Richland’s program, said that 26 individuals achieved certification already.

The training and another alternative energy class are more popular with Richland’s inmates than she ever expected. “It’s a hundred times bigger than I thought it would be,” she said. “Other institutions are sending inmates here to get trained.”

Individuals who are successful still face an uphill battle landing a full-time job, though, and Baxter has no idea how many of the students are able to launch careers.

“Hiring is a stumbling block,” said Jane Harf, executive director of Green Energy Ohio, a nonprofit that promotes sustainable energy. “Employers know that a person is certified but they still say: ‘How do I know what this experience will be like?’”

That’s why she’s writing a proposal to fund six-month apprenticeships for the people to work for solar companies. Already, the group takes resumes from program graduates and shares them with the group’s member companies, who also donate equipment to Richland.

“The companies won’t have to invest the resources initially,” Harf said. “They can evaluate how they work, and hopefully, hire them on full time.”

Shelton, who now lives with his wife in La Mirada, California, says his late teenage years were a troubling cycle. After spending time in unstructured foster care, he fell into gang activity. A month after his 18th birthday, Shelton received his first felony charge. Then he was on probation and had trouble finding work.

Things got worse. On May 5, 2015, Shelton — then 19 — was driving a stolen car that he had bought from a friend (he says he didn’t know the car was stolen). When the police tried to pull him over, he panicked.

“When they turned the lights on, one of my friends in the car had a lot of drugs on him,” Shelton said. Shelton fled in the car. The police gave chase. Shelton crashed and was arrested. “Thank God, nobody got hurt in this situation,” he said. “That was the most fortunate thing.”

Shelton went to prison for about a year. Inside, he felt isolated and stuck. He signed up for a prison class and was advised to look for temp work doing manual labor or inside delivery warehouses.

On the outside, he took the advice and visited a temp agency and took gigs inside warehouses around the L.A. area. “I was working as hard as I can, but I was stuck in another cycle of going from agency to agency. Working a month here, a month there,” he said.

Shelton couldn’t build up a resume and was barely making enough money to keep up with his probation payments. He didn’t fall behind, but he couldn’t get ahead either.

That’s when Shelton found Conservation Corps Long Beach, an organization that finds work for at-risk youth inside their communities. Here, he finally felt like he was learning tangible skills. He learned pressure washing, trail building, tree removal. He was able to pay off bills and get ahead on his probation payments.

That’s when he heard about the solar training program. Today, Shelton installs solar panels on homes in communities like Compton and Long Beach.

When he’s not working, he’s taking classes at a technical trade college in Los Angeles, where he’s going for an associate degree and a certificate in electrical construction and maintenance. He plans to complete the program in 2021.

His long term goal? “I want to do solar.”