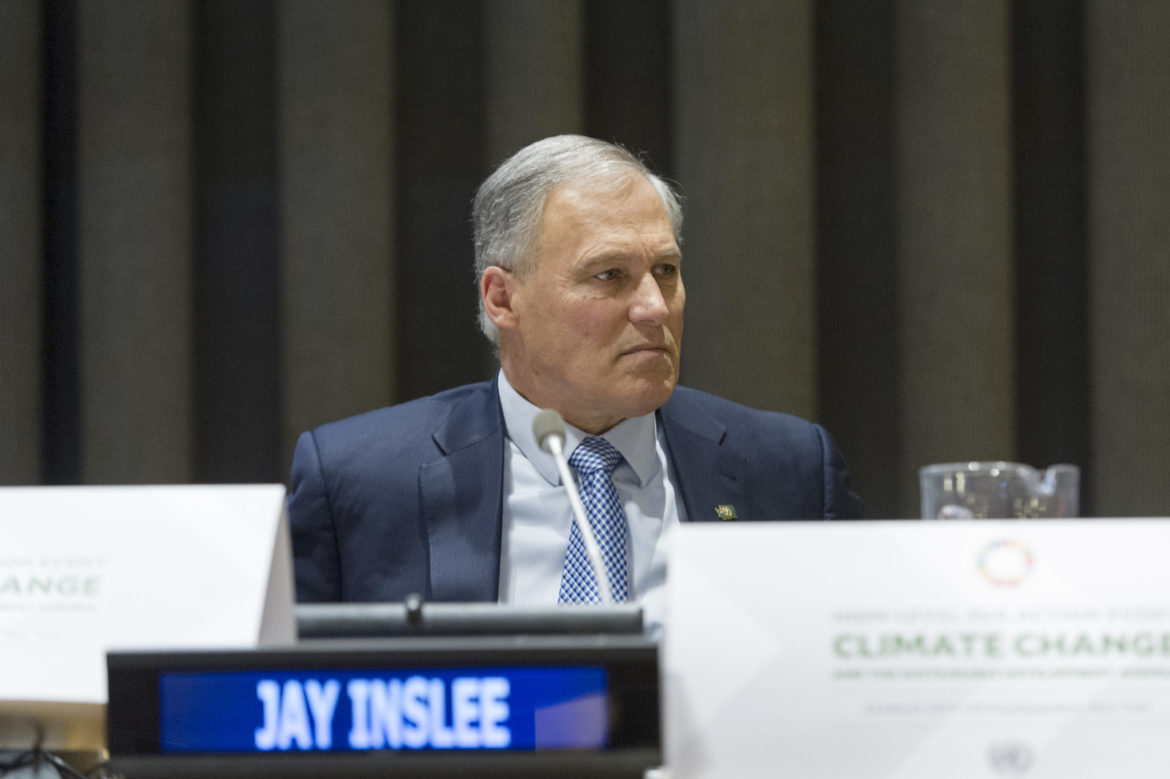 As Democratic presidential hopefuls ramp up campaigns to reach Iowa caucus voters, recent ads by one candidate have a narrower audience in mind: decision-makers at the state’s largest utility.

Jay Inslee, the Washington governor who is running for president on an aggressive climate action platform, unveiled three indoor billboards this month within blocks of MidAmerican Energy’s Des Moines headquarters.

Against a backdrop of a partially submerged tractor and farm buildings, the advertisement links MidAmerican’s coal-burning power plants with recent Midwest flooding that experts say are intensifying due to climate change.

A web address at the bottom of the ad directs people to a campaign site where they can provide their name, email address and zip code to sign a petition asking MidAmerican to stop burning coal.

MidAmerican has made significant investments in wind power in recent years. The utility will soon have about 5,000 megawatts of wind capacity and enough renewable generation to match 100% of its customers’ electricity use.

Yet, when the wind isn’t blowing, the utility still relies on coal. The company operates six coal-burning power plants that produce about 30% of its power. The coal plants have been a target of Iowa environmental groups for years.

For a presidential candidate to enter the fray, challenging a major economic player in the state while courting caucus voters, is an unconventional move.

“To go after a specific corporation is very unusual,” said Karen Kedrowski, an Iowa State University political science professor and director of the Carrie Chapman Catt Center for Women and Politics.

Kedrowski said Democratic candidates have tried to refrain from direct criticism of each other, hoping to avoid a repeat of the party’s divisive 2016 primary. Ads targeting MidAmerican are a way for Inslee to set himself apart without going negative on an intraparty opponent, she said.

Whether it helps Inslee’s campaign or environmental groups’ fight to close MidAmerican’s coal plants is to be seen, but Josh Mandelbaum, an attorney for the Environmental Law & Policy Center, welcomed the attention for the issue.

“MidAmerican is a large coal generator with no current plans for retirement of its coal plants,” Mandelbaum said. “Identifying the problem and calling for a solution is critical to clean energy work in Iowa.”

MidAmerican spokesperson Tina Hoffman dismissed the advertisements as an example of “political stunts to garner coverage.” She said Iowa leads the nation in the share of electricity from in-state wind energy production.

“Iowa is a clean energy leader — second in the U.S. for installed wind capacity — thanks in large part to MidAmerican Energy’s commitment to clean wind energy,” Hoffman said.

Katie Rodihan, press secretary for Inslee’s campaign, said MidAmerican needs to do more, and that as a presidential candidate challenging the fossil fuel industry, Inslee could not stay silent on the fight against coal in Iowa.

“They need to stop burning coal,” Rodihan said. “This is one of the ways Gov. Inslee is pushing back against the fossil fuel industry, which is something he’ll continue to do as president.”