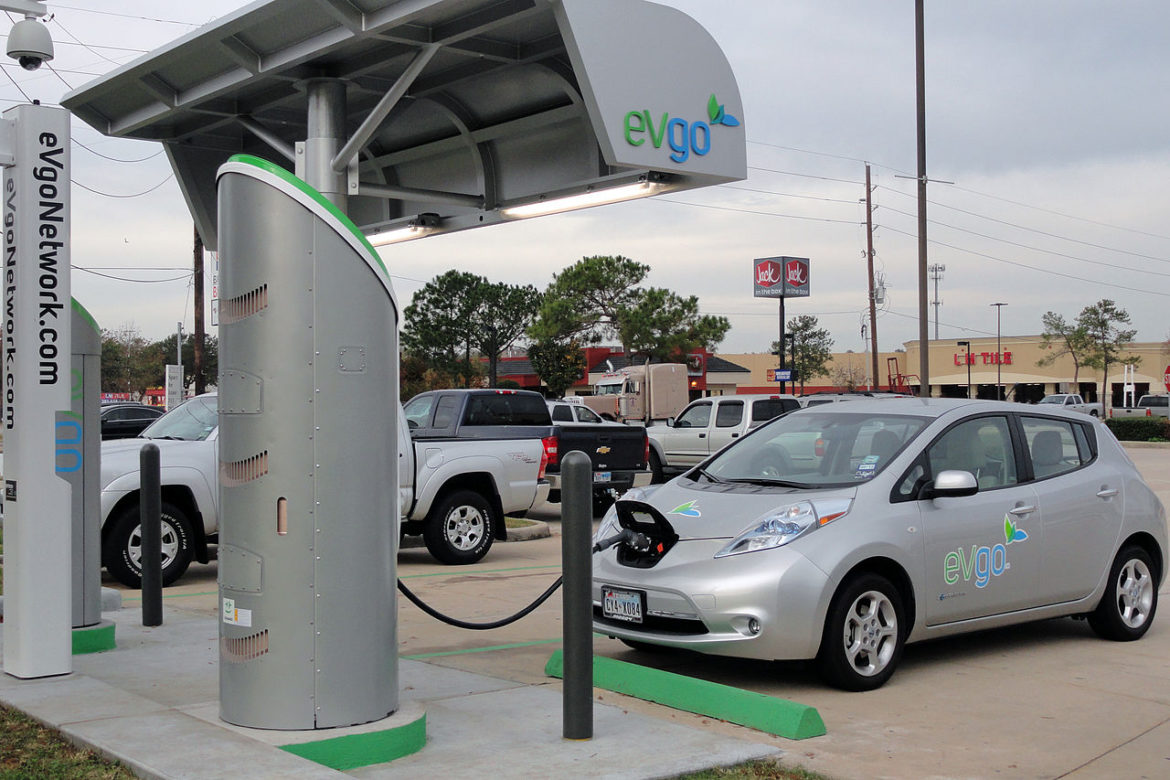 A Nissan Leaf charges at an EVgo station in Houston, Texas.

A Missouri test will look at lead-acid batteries’ potential to reduce or eliminate demand fees for vehicle charging.

An industry group is preparing a pilot project in Missouri to test the potential for batteries to pay for themselves by reducing demand fees on electric vehicle charging stations.

Demand fees are charges based on a customer’s peak use during a billing cycle as opposed to total use. Spikes in demand, such as those that can occur when an electric vehicle plugs into a fast-charging station, can result in high costs in areas where utilities impose the fees.

The Consortium for Battery Innovation, an international industry group representing lead-acid battery companies, is recruiting gas stations in Missouri for a project to test how the batteries could help level out power demand at charging stations.

“The concern about [direct-current] fast charging is the impact on demand fees,” said Angie Rolufs, a Missouri business consultant who has been working on the project. “If you can eliminate that, and even show a return, you have a model … that would be adopted.”

Nationally, transportation is the largest source of greenhouse gas emissions and transitioning to electric vehicles is seen as essential for preventing the worst potential impacts of climate change. Widespread adoption won’t likely happen, though, until charging vehicles is as fast and easy as fueling up with gasoline.

The electric vehicle and charging industries are working to provide that. EVGo, a charging company in southern California, is testing chargers that move power three to seven times faster than the more typical 50-kilowatt fast chargers on the market today. That also means bigger demand spikes.

“We think there is a huge role to be played by batteries,” said Jonathan Levy, EVGo’s vice president for strategic initiatives. “Right now we are putting up batteries to see how they work in different cases.” The company has batteries at eight of its stations, which are concentrated in California.

The goal is to make charging about as fast as filling a tank with gasoline, but that can be disruptive to the power grid. That’s where batteries would enter in. In theory, a rapid charge could pull at least some of the needed power from the battery, which could then be recharged more gradually, and possibly at a time when the cost of energy is lower.

“This kind of innovation could result in a much faster and more effective rollout of EV charging stations using tried and tested battery energy storage with lead batteries,” said Alistair Davidson, director of the Consortium for Battery Innovation.

Jason Burwen, vice president for policy for the Energy Storage Association, said that with the advent of faster charging, “We expect to see more storage systems paired with EV charging infrastructure. These storage systems will manage the demand of vehicles on the grid.”

The Missouri Division of Energy, keen to grow the state’s already substantial lead-acid battery industry, gave $25,000 in federal funds to the consortium for the project. An initial study has already been completed and the organization is now seeking to test its conclusions with two installations.

Missouri ranked 24th in electric vehicle sales in 2018, according to EVAdoption.com. The state’s natural resources department plans to use $6 million in Volkswagen settlement trust funds to develop a corridor of fast-charging stations. A couple weeks ago, the department issued draft guidelines. Rolufs hopes to snag some of that money in 2020 to purchase fast chargers for her experiment. The impending buildout of stations in Missouri is another reason to explore battery storage to accompany the chargers, she said.

Rolufs, vice president for strategic energy initiatives for Paragon Business Solutions in Missouri, also is encouraged by the state’s energy plan, issued in 2015. It identified battery storage as “something that could set Missouri apart.” But the emphasis is on lead-acid batteries, given that Missouri has a generous seam of lead running through the eastern part of the state, as well as a huge battery recycling industry.

The project team identified a gas station in the Springfield area that is enthusiastic about hosting a fast charging station with storage. They still are trying to select one in the service territory of electricity provider Ameren Missouri. Other gas stations have expressed interest, she said, and some members of the consortium have indicated they will donate batteries for the pilot project.

The systems likely would be installed by the end of 2020.

The batteries add significant cost to charging stations. The type of fast-charger being used for the study costs about $40,000 on its own. The lead battery adds another $75,000 to the price tag.

Given their high cost, batteries can be useful and economical to charging systems under certain limited circumstances, according to Garrett Fitzgerald, a manager in the mobility transformation division of the Rocky Mountain Institute. High demand fees are one prerequisite. The other, Fitzgerald said, is infrequent high-speed charging sessions such as those likely in less-populated areas.

Demand fees kick in with just one high peak in a billing period, and a battery could eliminate such peaks and the demand fees they lead to. That could dramatically cut costs for a charging station owner with only occasional fast charges, he said.

A station that provides many high-speed charging sessions in a month might sell enough power that a demand fee would hardly be noticeable, and therefore a battery unnecessary, Fitzgerald said.

Still, as the cost of batteries continues to fall and the speed of electric vehicle chargers continues to increase, the role for storage at fast-charging stations likely will grow, he said. What’s less clear is whether lead-acid batteries will be the ones to fill that market.

The Missouri experiment is using lead-acid batteries rather than the more prevalent lithium-ion batteries. Lithium-ion batteries generally have a longer life, and can keep holding onto power throughout many cycles of charging and discharging. However, Fitzgerald said, a high-speed charging unit that is used only infrequently might get the power it needs from a lead-acid battery.