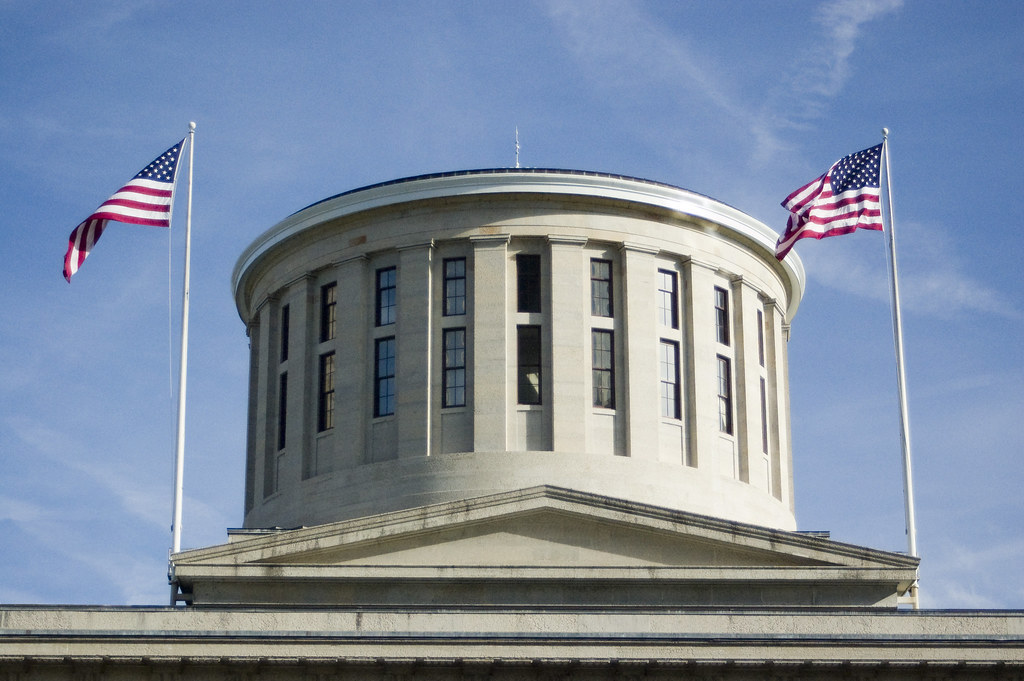 The Ohio Statehouse rotunda in Columbus.

Emails show the legislation originated from correspondence between two of Ohio’s most prominent wind energy critics.

A bill to limit certain constitutional challenges in Ohio was conceived in response to a court case over how the state adopted its wind turbine setback rules, according to emails obtained under the state’s public records law.

Ohio House Bill 126 would create a 275-day statute of limitations for challenges under the Ohio Constitution’s single-subject rule, which bars lawmakers from combining unrelated subjects into a single bill.

That rule is the grounds for a lawsuit filed by wind energy supporters late last year that seeks to strike down a last-minute 2014 budget bill amendment that effectively tripled property line setbacks for commercial wind turbines. A motion to dismiss the case is pending.

The bill’s primary sponsor, freshman Rep. Brett Hillyer, R-New Philadelphia, denied a connection between his legislation and the wind setback lawsuit, but emails indicate the bill stemmed from correspondence between two of Ohio’s most prominent wind energy critics a day after the lawsuit was filed.

At that time, former lobbyist Sam Randazzo emailed Rep. Bill Seitz, R-Cincinnati, a news article about the case. Randazzo has represented wind energy opponents in lawsuits and now chairs the Public Utilities Commission of Ohio and the Ohio Power Siting Board. He declined through a commission press officer to comment for this article.

“[O]ver a decade ago I introduced a bill to create a six month statute of limitations for any single subject challenge,” Seitz said in his reply email. “Sadly it did not pass but we should do it again.”

The emails were provided to the Energy News Network by the Energy and Policy Institute, a nonprofit organization that describes itself as a pro-clean energy watchdog exposing misinformation from utility and fossil fuel interests.

Seitz told the Energy News Network that the wind setback lawsuit “got me to thinking” about taking another try to limit challenges under the single subject rule.

“If you allow four years for people to come sliding into court complaining about something they knew about the minute the bill became effective four years before, that’s no good, because the General Assembly will have changed two times since that time,” Seitz said. “And it’s really unfair to allow people to come in that long after the bill passed with these complaints.”

Seitz later brought a draft bill to Hillyer, who introduced the legislation as a worthwhile legal reform without mention of the contested wind setback law.

“It is not fair to our constituents to leave the possibility of litigation past one year,” Hillyer said in his sponsor testimony in April. His testimony did not cite any specific cases, and neither the 2014 wind setback provision nor the lawsuit have been noted in testimony so far before the Ohio House Civil Justice Committee.

A matter of timing

Hillyer said in an interview that the wind setback lawsuit didn’t enter into his decision to sponsor HB 126. “I didn’t even know it existed,” he said.

“Rep. Seitz had brought [the draft bill] to me, and we discussed the statute of limitations in general,” Hillyer said. “I liked it. It was a short bill. And I think what it does is it makes litigants litigate their claims sooner, rather than later. So that way, if legislation needs tweaking it can be tweaked by those who produced it, not four years later by someone else.”

Hillyer said he extended the deadline for filing challenges from the 180 days in Seitz’s draft to 275 days from a law’s effective date. Seitz is a cosponsor of the bill.

The single-subject provision matters because it gives members of the public notice about what lawmakers are considering, along with an opportunity to take part in public hearings or contact legislators about issues before a bill is passed.

Hillyer downplayed the significance of those concerns. “You can’t tell me that the various interest groups in Columbus aren’t watching every bill, including the budget,” he said.

Seitz said that the single-subject rule has been “interpreted all over the place” by the courts, and “is kind of a dumb provision anyway.”

The 2014 provision tripling the property line setbacks was a last-minute addition to a budget bill. There were no public hearings before the bill passed. And there was barely 10 minutes of discussion on the Ohio Senate floor; Seitz was the only lawmaker to speak in support of the provision.

A Nov. 14 email from Seitz to Randazzo said the 2014 process was not unlike the one used to establish previous wind turbine setbacks in Ohio.

“I think if you look at the history of wind setback bills, every one was done in a budget corrections bill!” Seitz wrote. “So if the 2014 [provision] is invalid under single subject so we’re the prior two — meaning there would be no state setbacks at all!!”

The American Civil Liberties Union of Ohio has suggested the proposed short-fuse statute could encourage more violations of the single-subject rule.

“HB 126 is not needed,” chief lobbyist Gary Daniels said in his testimony. “But, if passed, Ohioans will have every reason to be concerned the legislative creativity we all witness with budget bills and during lame duck will become more commonplace in the Statehouse as the ability to file lawsuits becomes more limited.”

HB 126 has had three hearings before the House Civil Justice Committee so far.

The failure to note the wind issue in the legislative record shows “the level that people will go to to limit wind power growth in Ohio,” said Dave Anderson, policy and communications manager for the Energy and Policy Institute.

The bill could also cause problems for other energy-related challenges. For example, language in the current budget bill would relax restrictions on utilities earning “significantly excessive profits.” The change could benefit FirstEnergy’s Ohio Edison utility and other utilities. However, the existence of those profits probably wouldn’t be clear until utilities provided after-the-fact calculations.

“This provision should be removed,” Ohio Consumer’s Counsel Bruce Weston said in his June 17 testimony on House Bill 166. “At a minimum, it should be considered in a stand-alone bill instead of in the budget bill, along with considering consumer protection reforms.”