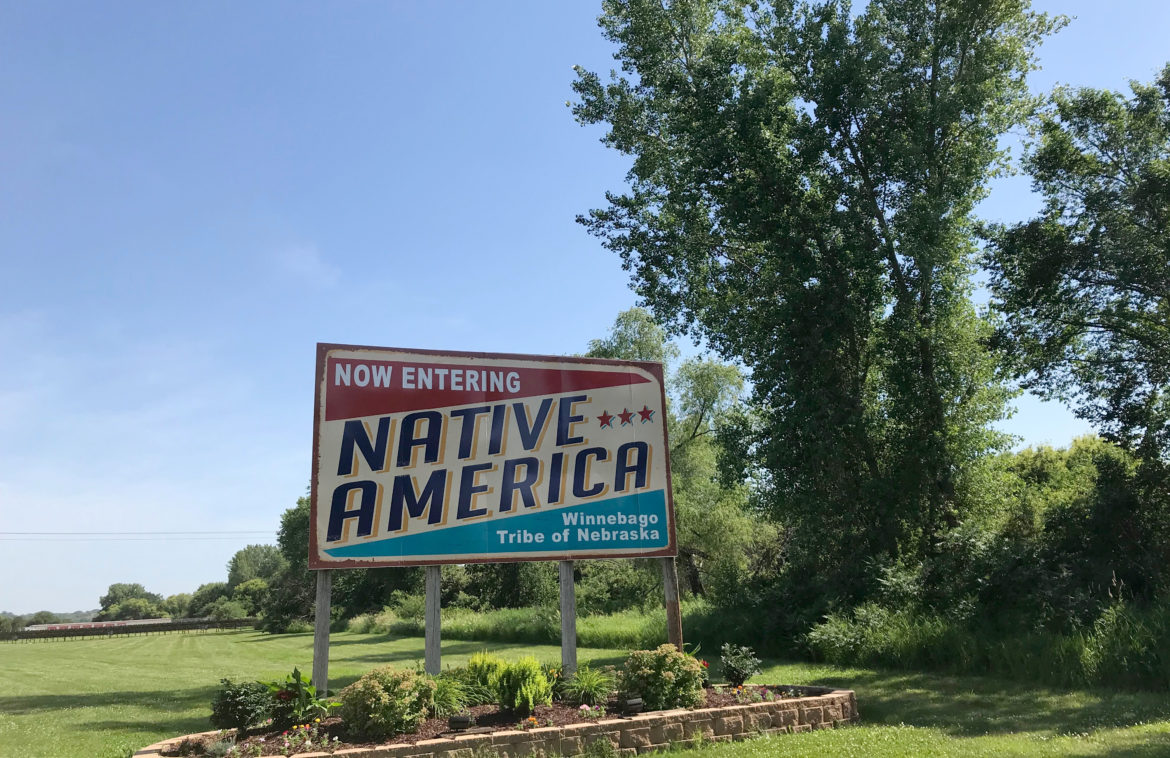 A sign welcomes visitors to the Winnebago reservation in Nebraska. The tribe's solar array can be seen in the background on the left.

The donated equipment, popular in the 1970s and ’80s, will help the Winnebago tribe save on heating costs.

A Nebraska tribe that is completing the installation of 720 kilowatts of solar photovoltaic panels is pursuing another solar technology for meeting even more of its energy needs.

The Winnebago tribe recently received a gift of used solar thermal heaters and soon will refurbish and install them to heat several buildings on tribal land in eastern Nebraska.

The tribe began about a decade ago to pursue greater energy self-sufficiency. In 2008 it experimented with a 25-kilowatt solar installation. The tribe’s vision and ambition grew, and it won a federal grant in 2017 and a second grant a year ago, totaling about $790,000.

By August, the last of the photovoltaic panels should be in place, according to Ann Marie Bledsoe Downes, executive vice president of community impact and engagement for the tribe’s economic development arm, Ho-Chunk Inc. She estimates that the solar arrays likely will save the tribe and its members roughly $100,000 in energy costs per year. In May, the panels produced 71,978 kilowatt-hours of electricity.

The panels are on structures throughout the community of about 850 people, and cross the Missouri River into Iowa, where the tribe operates a casino. The panels are on the tribe’s casino, a couple of convenience stores, tribal offices, and a warehouse and other structures.

Because much of the housing on the reservation is government-owned, it has not been equipped with PV panels. However, a few privately owned residences will be receiving solar thermal heaters as part of the tribe’s latest solar project. The opportunity came out of the blue, Bledsoe Downes said, in the form of a “random inquiry from a gentleman who had old some thermal panel technology that he wondered if we might be interested in.”

Robert Byrnes, the installer who has managed the reservation’s transition to solar energy, said he thought the panels were used in a college in Colorado 40 or 50 years ago. The technology was popular in the 1970s and ‘80s, according to Byrnes.

“But when the tax credits got pulled, it went away.”

The system’s unappealing looks didn’t do much to advance the technology either, Byrnes said.

“It’s a black box on the side of the house.”

But as for cost-effectiveness, Byrnes says it beats PV panels. The system, attached to an exterior south-facing wall, takes cold air from near the floor and uses a fan to push it through a serpentine pipe inside the insulated black box where it warms up. Then it blows heated air back into the room. It has a system for controlling itself, Byrnes said.

The decades-old donated heaters “needed some love and attention,” Bledsoe Downes said. The tribe received a $60,000 grant for that purpose from the Nebraska Environmental Trust, a nonprofit agency that distributes income from the state’s lottery.

Bledsoe Downes said it looks like there are enough furnaces to heat four residential and four commercial spaces.

“We did a test run on one and put it on a house,” she said. “They are having great success with it.”

Because of the brisk interest, the tribe may use a raffle to choose the residential sites.

Byrnes said, “Even though this is an old technology, it’s a good opportunity to display them, to show they’re effective, and hopefully to get more of them. A solar thermal panel is something you can make locally.”

Byrnes says a crude version of the heaters can be cobbled together from soda cans and other scrap metal.

“It’s not the prettiest thing to look at, but it works good and saves money. We’d like to have more of these on the reservation to offset heating costs.”

Solar thermal heating technology is alive and well in Minnesota, where the Rural Renewable Energy Alliance (RREAL) designed its own heater and for years manufactured and installed them at no cost to low-income households.

RREAL has shifted its focus to community solar and licensed the design to the White Earth Nation in northwest Minnesota. The tribe began producing the heaters this year and has been selling them on the market, according to Kyle Tschida, office manager.

In Nebraska, Bledsoe Downes can imagine the tribal college, for example, instructing people on how to build and install thermal panels.

“The more I’ve learned about it, the more I think this is something to pursue,” Bledsoe Downes said. “A good handyman or backyard warrior with the right tools could build one of these. Maybe we can partner with the tribal college and teach people how to make these things.”