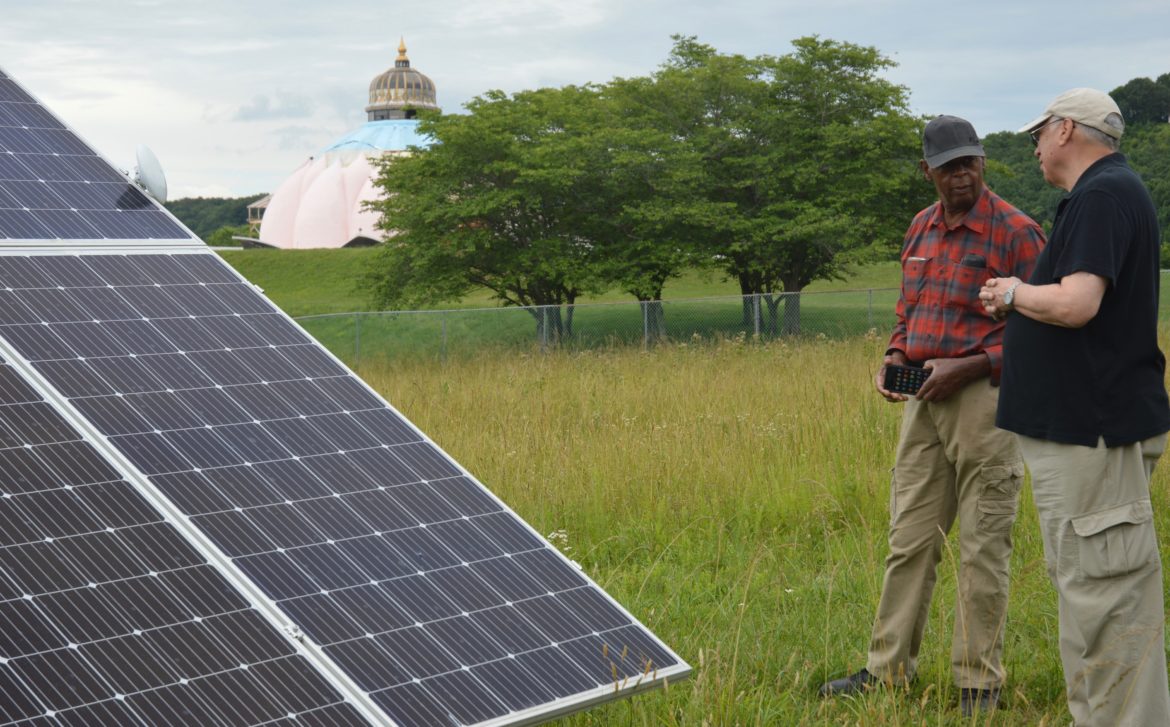 YOGAVILLE, Va. — Yogaville leaders were heartened when they learned five years ago that Dominion Energy’s Atlantic Coast Pipeline would be buried a few miles from their property line in Buckingham County.

They figured having access to a cheap and abundant natural gas supply to power their 660-acre spiritual center along the banks of the James River would provide significant utility bill relief.

Their enthusiasm abated, however, when they found out locals weren’t allowed to tap into the energy resource. That discovery prompted them to organize a team that dug relentlessly into the carbon footprint of fossil fuels, their retreat’s own energy footprint and the far-reaching impact of pipeline infrastructure.

“It was eye-opening and prompted us to take a stance against a pipeline we didn’t want near us,” said Jeeva Abbate, director of Yogaville Environmental Solutions, an internal group abbreviated as YES. “But some of our visitors said they saw all of this no, no, no to the pipeline and the compressor station and asked if we could find a solution we could say yes to.”

That key question spurred not only the birth of YES, but also a link to the group Green Faith and an energy audit that revealed Yogaville’s campus was ideal for solar installations.

“When we saw the possibilities, that audit kind of became our Bible,” Abbate said. “This whole process has activated us to protect this pristine land.”

Founder and yoga master Swami Satchidananda dedicated his life to universal peace and religious harmony. The swami envisioned Yogaville as a place where people of all faiths and backgrounds could learn and practice what he called the simple yet profound teachings of yoga. The nonprofit community, where Abbate and dozens of others live year-round, also attracts hundreds of short- and long-term visitors.

Solar lets Yogaville begin weaning itself off fossil fuels and sends a message about opposing the pipeline, Abbate said.

Fast forward to mid-June. Abbate is being trailed by a gaggle of adults from the region enrolled in a weeklong solar boot camp at nearby Union Grove Missionary Baptist Church. Their instructor has arranged a field trip to examine all aspects of Yogaville’s two new solar arrays.

“The thing that touches me the most is the partnership between the yogis and the Baptists,” he said about their bond over pursuing solar. “They’re our neighbors and I think it’s awesome.”

Two projects, more on the way

Exhibit A on the tour is the 194-panel rooftop array that Sigora Solar of Charlottesville installed atop Sivananda Hall last year. The 65-kilowatt system roughly halved a monthly $1,800 electric bill in a building with a kitchen and dining hall that is also used for chanting, presentations, meetings and celebrations.

What was proposed as a pilot program came to fruition when an outside financial analyst told Abbate that numbers for renewable energy looked so strong he would be investing in solar on his own home.

“We’ll pay it off in 10 years. It’s basically a working asset for the next 30 years,” Abbate said about the system. “Seeing those panels changed the way people looked at Yogaville. People started to contribute.”

That momentum led to Exhibit B on the tour, a 45-kilowatt ground-mounted array installed early his year that powers the retreat’s iconic structure, the Light of Truth Universal Shrine (LOTUS). The 130 panels cover the complex’s monthly $600 to $700 electric bill.

The shrine, completed in 1986, and its adjacent fountains will be fully operational next year after an extensive restoration project.

“If you can be powered by the sun instead of by dirty fuel, why wouldn’t you?” Abbate asked.

Both systems allow Yogaville to sell excess generated energy back to its utility, the Central Virginia Electric Cooperative, via net metering.

Inside Sivananda Hall, Abbate pulled out his laptop to show the 10 inquisitive students the software application that allows him to monitor every aspect of the solar installations in real time.

“I’m telling you, you’re going into the right line of work,” he told them. “Solar makes financial sense and for you all, it’s going to make job sense.”

One student, Krishna Jo Melendez, who handles information technology at Yogaville, helped to make the boot camp possible by hooking up the Union Hill church’s Fellowship Hall to Wi-Fi. In return, training organizer Richard Walker gave Melendez one of the 10 scholarships he procured via a grant from the Mertz Gilmore Foundation.

‘Adversity is a blessing in disguise’

Connections between Yogaville and Union Hill — 15 minutes apart by car and both roughly 70 miles west of Richmond — have blossomed since the words “Atlantic Coast Pipeline” entered their respective vocabularies in 2014. If built, it would bisect Virginia for roughly 300 of its 600 miles to move hydraulically fractured natural gas from West Virginia to North Carolina.

Land for Yogaville, first purchased in 1979, was the longtime dream of  Satchidananda, who died in 2002. It is a haven for yoga programs, retreats and trainings.

The tiny rural community of Union Hill came into existence much earlier when free Blacks and former slaves settled in Buckingham County after the Civil War. For instance, Walker is the fifth of eight generations of his family to call Union Hill home.

Both communities have joined with local anti-pipeline organizations such as Friends of Buckingham, and also tied into similar efforts coordinated by the larger Allegheny-Blue Ridge Alliance.

“It turns out that adversity is a blessing in disguise,” said Swami Dayananda, part of YES at Yogaville. “The pipeline made us realize how climate change is upon us and made us move into making solar a priority.”

Countering Dominion’s insistence on constructing a pipeline compressor station near Union Hill homes off Highway 56 is what motivated Walker to wrap solar training and other environmental issues into Bridging the Gap. He founded the nonprofit a decade ago to help struggling Virginians find footing in the workforce.

Abbate is alarmed that a reroute means the pipeline — now on hold, at least temporarily — could come within 1,000 feet of Yogaville. He empathizes with concerns Union Hill residents have raised about the possibility of gas leaks and explosions, the lack of a safety or evacuation plan, and the impact construction will have on the landscape.

He and other yogis also have questioned the giant utility’s decision to burden a minority community with an energy infrastructure project that could disturb African American burial sites not yet officially cataloged.

“Our awareness is growing,” said Abbate, part of Yogaville for seven years. “The science is there and it has benefited us to look at this rationally and operate with facts.

“As yogis, our challenge is, how do we stand up for something that’s important?”

The lesson in clean energy prompted Yogaville to step up on other green fronts such as recycling, retrofitting for energy efficiency and growing on-site organic food.

“What we’ve realized with sustainability is the importance of starting at our own home,” said Dayananda, who attended a celebratory fish fry at the Union Hill church on June 14, the last day of the solar boot camp.

Walker continues to doggedly pursue a solar project for Union Hill. He knows he can count on the skills of the Solar 101 graduates when he finagles a deal.

In the meantime, Abbate envisions the day when the sun and still-evolving battery storage can cover Yogaville’s $105,000 annual cost for electricity.

“It may take years, but it will be a legacy service,” he said. “It’s a way for us to be positive in the situation we’re in as a planet and a community.”