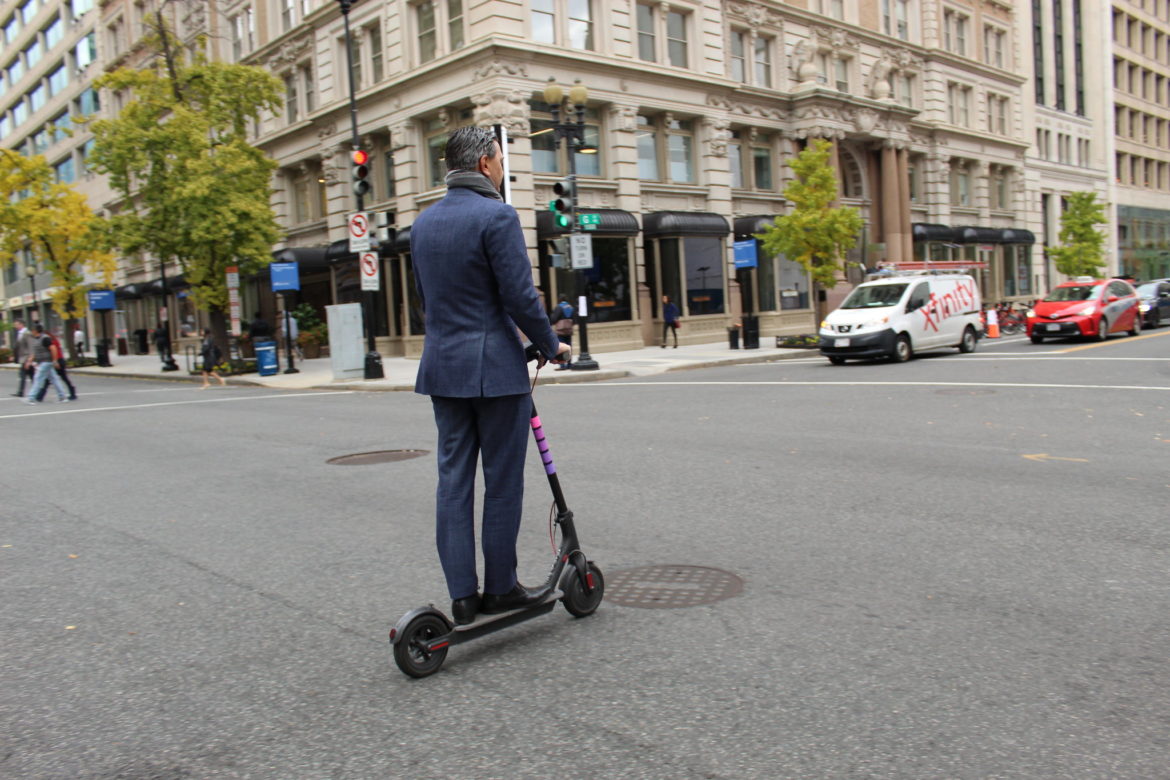 A rider crosses an intersection on an electric scooter.

A four-month pilot in the city’s West Side is testing whether scooter-sharing could help reduce emissions.

Chicago’s new electric scooter pilot had more than 60,000 rides in its first week, but it also has its fair share of critics.

While much remains to be seen in the four-month pilot, some experts say a large-scale scooter-sharing program like this could help the city reduce its carbon footprint while providing residents a viable transit alternative to cars. And it could lead to improvements for other clean transit options, especially bikes.

Still, some questions have yet to be answered, particularly around the carbon costs — including for the vehicles that pick up the scooters for charging — versus savings.

The city selected 10 scooter companies to supply 250 electric scooters each in a 50-square-mile area on the city’s West Side for the pilot, which began in mid-June. Riders can locate scooters on smartphone apps and pay a small fare based on the duration of their ride, similar to bike-sharing programs like Chicago’s Divvy service. Each company decides its own fare. The pilot area was selected because it’s less widely served by Divvy than other areas of the city.

“The pilot is one of many strategies Chicago is pursuing under the American Cities Climate Challenge to accelerate our efforts to reduce carbon emissions by the end of 2020 and achieve our goal of reducing greenhouse gas emissions, consistent with targets set in the Paris Agreement,” said Mike Claffey, director of public affairs at the Chicago Department of Transportation, in an email.

Chicago is one of 25 cities participating in the climate challenge to help the country continue meeting goals outlined in the United Nations Paris Agreement. The city also has a goal of reducing greenhouse gas emissions by 25% below 1990 levels by next year.

“Shared bicycles and scooters have emerged as a new way for people to travel across their cities, and the pilot offers a substitute for more carbon-intensive forms of travel, for short point-to-point trips and first- and last-mile transit commute connections,” Claffey said. “First- and last-mile” refer to the short distances commuters travel to transit stops.

But, he added, “this is a four-month pilot and we are taking a deliberate and cautious approach.”

“I think the city is taking the right step in doing a pilot first,” said Elizabeth Irvin, transportation director at the Center for Neighborhood Technology, a Chicago-based nonprofit that promotes urban sustainability. “There are a lot of unknowns” about how programs like this could affect the environment. But some of the factors the city is evaluating, such as public transit and Divvy ridership in the pilot area, as well as changes in Uber and Lyft ridership, could help officials determine whether this program is effective in diverting car trips, she said.

Electric scooters and similar programs can make public transit accessible to more people and reduce the need for people to use larger vehicles over short distances, said Mark Nabong, a senior attorney at the Natural Resources Defense Council. Both of those things can help reduce carbon emissions.

But Chicago has a robust public transit system already, he added. It’s possible people won’t use the scooters because the bus or train stop is close enough already. On the other hand, scooter ridership could be higher because the scooters help people access those transit stops.

Divvy has been criticized because bike stops weren’t placed in a diverse set of locations, he said. By prioritizing West Side communities, where Divvy or public transit stops may be less accessible than in other parts of the city, the scooter pilot could benefit those communities.

“I think it could have a big emissions impact,” Nabong said. Studies have shown that younger people buy cars at lower rates than older people. Having this additional transit option could help delay that first purchase even more and reduce the number of cars on the road.

“There’s a big opportunity here [in Chicago] to have an impact,” said Matthew Lehner, a spokesperson with Lime, one of the scooter companies participating in the pilot. He cited findings from the Chicago-based Active Transportation Alliance, which showed that as of 2016, nearly 60% of Chicago residents drove to work.

“I think the potential of reducing carbon in cities across the globe through new transportation modes like scooters is immense,” said Andrew Savage, Lime’s head of sustainability. Portland, Oregon, which conducted a four-month electric scooter pilot in 2018, is one example of scooters’ potential to divert car trips, he added. In its follow-up evaluation, the city found that 34% of riders used the scooters instead of driving or taking a taxi or ride-hailing service.

Lime has reported about 65 million trips taken across its global market, which includes primarily U.S. and European cities. According to a statement from the company, “we estimate that we have diverted more than 20 million miles of car travel; prevented more than 8,000 metric tons of carbon emissions; and saved over 900,000 gallons of gas — equivalent to taking over 1,700 passenger vehicles off the road for a year.” Most of the company’s emissions reduction impact has occurred within the last year due to the company expanding and ridership increasing, Lehner said.

Additionally, Lime purchases renewable energy credits on a quarterly basis to compensate for the electricity used to power its scooter fleet, Savage said. Lehner added that the company also offsets the emissions from the vehicle fleet it uses to collect and transport the scooters.

Those vehicle fleets, which many companies use to relocate their scooters, have been the subject of some skepticism from observers of Chicago’s pilot.

“There’s some math that needs to be done” to evaluate vehicle miles saved by the scooters versus the miles used to transport them, said Lucas Stephens, a research analyst at the Environmental Law & Policy Center. In addition to the companies’ own fleets, some also pay people independently to pick up the scooters — which don’t have a public charging system — and charge them at home. Lime calls these individuals juicers. Stephens said that if these independent contractors are also using cars to pick up scooters, that potentially adds emissions.

“What I do like, and what there has been some movement on, is some momentum towards street infrastructure,” he said. Riders aren’t allowed to use the scooters on sidewalks, and streets can be dangerous. Rather, they’re encouraged for use in bike lanes, leading to a push by scooter companies for more city bike lanes, which Stephens said would help Chicago meet its carbon reduction goals.

Some operators, including in Nashville, are discussing using portions of scooter trip fees toward installing additional bike lanes. Chicago and several other cities recently launched an effort to create data-sharing tools for scooter- and bike-sharing programs so that city governments can make these programs, and accompanying infrastructure, more useful for residents.

“I think we’re going to have to wait and see” whether electric scooters have a place in the city, Irvin, at the Center for Neighborhood Technology, said. “I don’t think we’re going to see everybody abandoning their bikes and their cars,” she said, but “there’s the potential for it to fill a missing link.”

“People are going to ask if we need this, but that’s not the question,” said Nabong, at NRDC. “The question is whether it makes life better.”

“Cleaning up the transportation that we have is not just getting more Teslas and Chevy Bolts on the road,” he said. “Everybody deserves to have the air be clean. These types of programs are innovative ways to get these benefits to everybody.”

Related coverage:
» ComEd electric ride-share pilot preparing to expand in second year
» In Illinois, storage is among the next hurdles for renewables expansion
» Curriculum helps keep Illinois educators up to date on state’s evolving smart grid
» This Chicago aquarium saved millions with an energy management dashboard