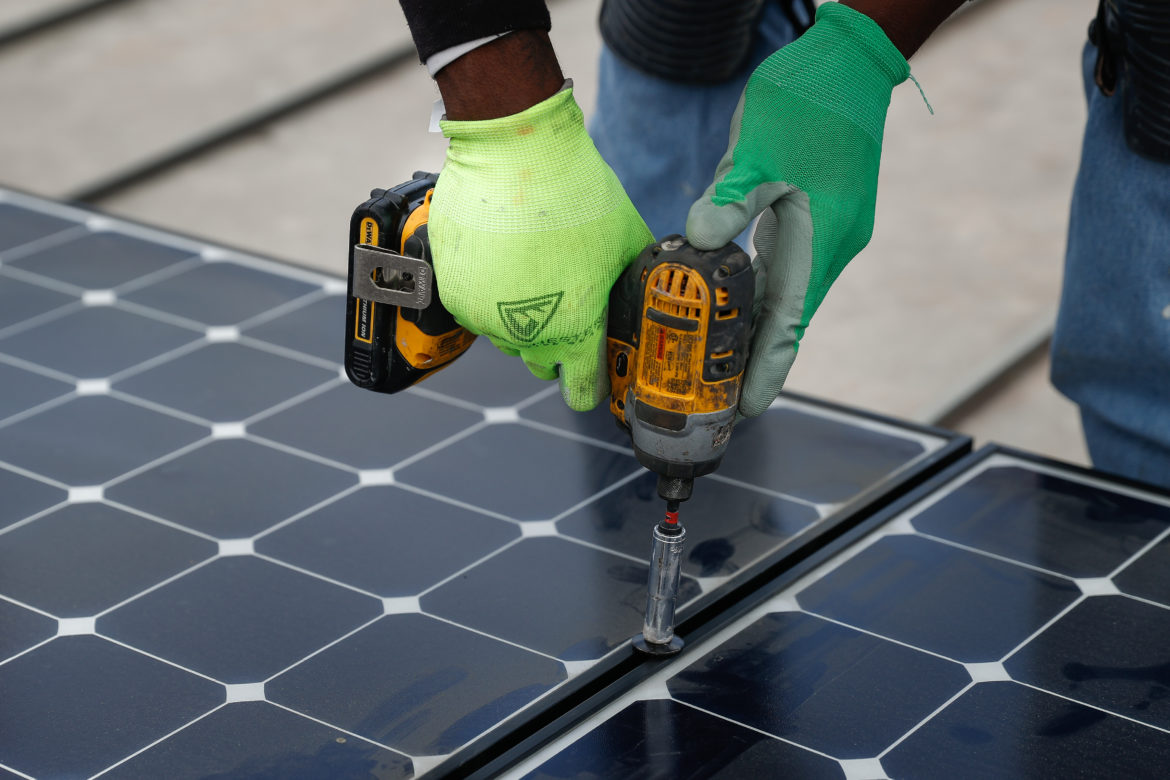 A city utility in Virginia’s Shenandoah Valley could become a statewide test case as it grapples with how to accommodate customers’ growing interest in solar.

Rooftop solar is so popular in Harrisonburg that its electric utility is on the verge of exceeding a self-imposed limit that bars customer solar installations from surpassing 1% of the utility’s peak demand for the previous year.

Solar advocates are pleased that the utility, the Harrisonburg Electric Commission, recently opted to double that limit to 2%, but they’re now wary that the utility might tinker with the rate it pays customers for unused solar power.

Utility leaders say they need to avoid shifting costs to non-solar customers as installations approach 1.4 megawatts, while solar advocates warn that not letting customers receive full credit on their electric bill for what they send back to the grid would squelch the enthusiasm and the financial case for solar.

Hints about changes appeared in a mid-April memo on the utility’s website.

Mixed messages in that announcement prompted Aaron Sutch and more than 25 other solar advocates to rise early on June 25 to attend the utility commissioners’ monthly board meeting at 7 a.m. Sutch is program director for Solar United Neighbors of Virginia, part of a national nonprofit organization.

“We had an excellent turnout,” Sutch said. “It demonstrated to the utility that residents are ready to stand up and protect rooftop solar because the community benefits so much from it.”

Brian O’Dell, general manager of the utility for seven years, said those monthly meetings usually attract a few residents at most, not the standing-room-only crowd that filled the small room in Harrisonburg Electric Commission’s Operations Center late last month. Roughly a third of the three-plus hour meeting was devoted to solar issues.

A total of 150 solar customers are now connected, meaning the utility has about 40 kilowatt-hours to spare before hitting the 1% cap.

“In the end, we raised the limit to 2% and are letting it ride,” O’Dell said in a post-meeting interview. “We’re hoping that will relieve a lot of the anxiety. We wanted to eliminate uncertainty for prospective solar customers and continue to evaluate our options for down the road.”

The board’s decision to boost the cap canceled a policy announced in the memo stating that customers applying for net metering by Sept. 1 and completing solar installations by the end of the year would be grandfathered into the current net-metering policy for 25 years.

Since net metering began in Harrisonburg, solar customers have received the full retail rate for the electricity they send back to the grid.

O’Dell said the Harrisonburg Electric Commission followed the lead of investor-owned utilities such as Dominion Energy when it settled on the 1% installation cap and full retail rate in 2010.

“There was no sense in reinventing the wheel,” he said.

Sutch called the 1% cap arbitrary and technically unsound, no matter which utility is implementing it, because “there’s is no technical or utility cost recovery basis or evidence for its existence.”

Nevertheless, HEC became the first utility in Virginia to bump up against the 1% cap.

A study the utility is launching will guide commissioners on if and how to adjust the net metering policy, O’Dell said. He added that he hopes to have results this fall on a study “that will take a fair amount of time for us to do.”

“We are not against solar,” he said. “We’re for the fair treatment of it for all of our customers. At some point, the cross-subsidy is going to become material and we’re trying to discover what point that is.”

He noted that most of the utility’s 21,350 customers are residential and that a large portion of them are compromised financially.

“As a distributor of electricity, we can’t lose sight of those customers for the sake of providing renewable energy to those that want it,” O’Dell said. “We need to keep rates as low as possible.”

More of the cost burden for the utility’s repairs, maintenance and operations falls on ratepayers without solar or net metering, he said.

“The concept of fairness has to do with neighbors living side by side,” O’Dell said. “One gets an electric bill and one doesn’t.”

The utility, they said, should view customer-owned solar as an energy choice and an opportunity to build clean, local and resilient power into the grid that reduces congestion and fills peak demand.

The Harrisonburg Electric Commission and other utilities need a mission more expansive than providing reliable electricity at affordable rates, he said.

“It’s a new world coming,” he said. “The environment, efficiency and emissions are not extras.”

Bradshaw noted that during the board meeting, several people referenced HEC data stating that even with 5% solar penetration, the effect on the utility’s revenue would be minuscule.

“The loss of less than half of one percent is nothing to fret about,” said Bradshaw, citing HEC’s numbers. “That’s not a two-tiered system.”

Bradshaw said it’s a false narrative that non-solar customers are subsidizing solar customers. Instead of picking on solar as a problem, the utility should be examining issues such as distribution fees and focus on making cost recovery fair and equitable.

“HEC can’t solve its financial woes on the backs of solar customers,” he said, adding that those customers are a tiny minority. “They’re going to have to reinvent themselves and figure out distributed generation.”

The Harrisonburg Electric Commission, founded in 1957, is one of several members of the Municipal Electric Power Association of Virginia that buys the power it distributes from Dominion, the state’s giant energy generator and transmitter. HEC’s 20-year contract runs through 2031.

Solar advocates have argued that those types of wholesale contracts make utilities more beholden to suppliers such as Dominion than the customers they serve.

Harrisonburg is somewhat of an outlier because it’s an example of how solar is booming in a place where residential customers pay the lowest electricity rates in Virginia — 9 cents per kWh.

“You expect solar penetration to be higher where rates are higher,” he said, adding that solar’s growth reflects “different values in the Shenandoah Valley.”

While he recognizes the valley is a nexus for solar champions, he said he was caught off guard by the stir the initial memo caused.

“It was not a foregone conclusion that changes would be made,” O’Dell said about the future of the net metering policy. “We haven’t given them any reason to think we’re going to pull the rug out from under them.”

Bradshaw said he was encouraged about the board’s willingness to “take its foot off the gas pedal” during the meeting.

He’s also more optimistic about the prospects for solar and net metering after a post-meeting conversation with new board member Maria Papadakis, a James Madison University professor with a deep understanding of energy issues.

She is one of five commissioners on the board. The utility operates independently of the city. The City Council is responsible for approving board members, but candidates for vacancies are nominated by commissioners. Each commissioner serves a three-year term.

Sutch said it’s crucial that the board reach out to solar developers and customers so they can engage in conversations instead of conflicts.

He emphasized that HEC’s study about net metering’s financial impact must be data-driven and transparent. As a follow-up, his organization has requested cost-of-service information from the utility.

“We want to work toward win-win solutions, but need to have processes be transparent and need relevant stakeholders at the table,” Sutch said. “We need data-driven decisions, not ones based on people’s opinions.”