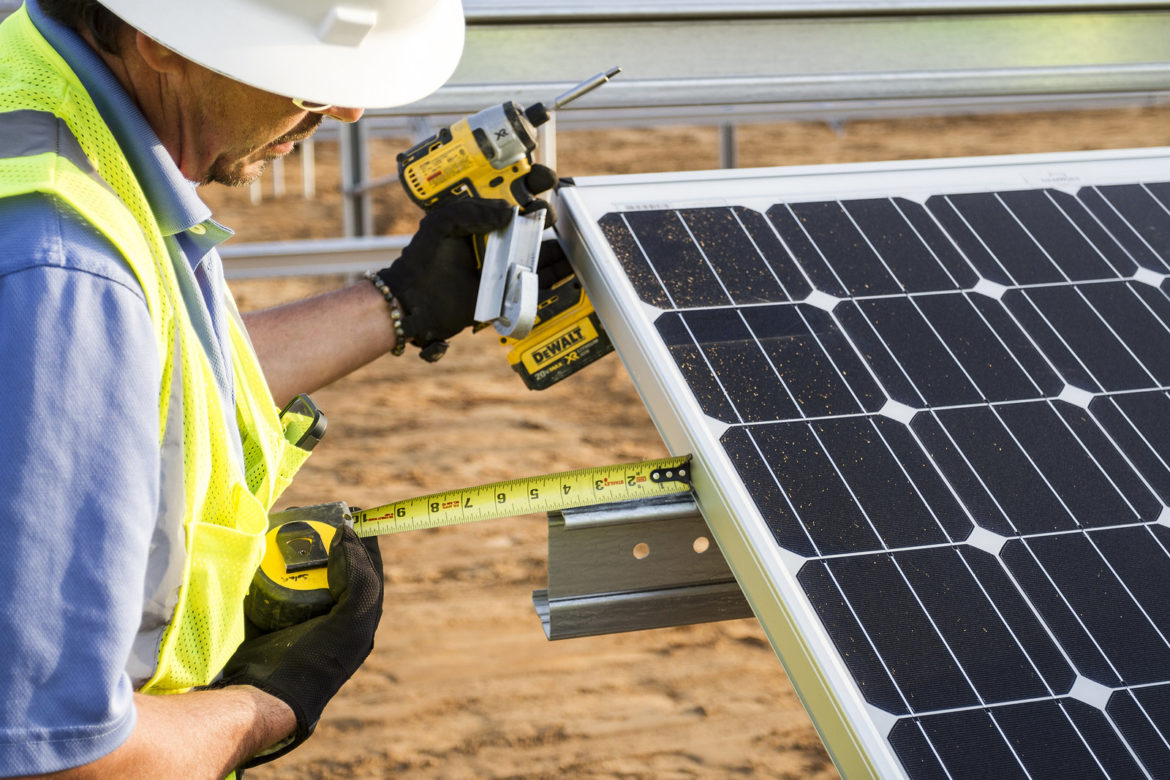 Despite a glut of interest in solar incentives, Illinois is expected to fall far short of an interim goal next year.

Correction: Nakhia Morrissette is regulatory counsel and Midwest director of state affairs for the Solar Energy Industries Association. A previous version of this story misidentified the organization.

The head of a state agency tasked with procuring power for Illinois utilities is warning about a widening gap between the state’s ambitious renewable goals and its ability to meet them with existing funding and incentives.

Illinois Power Agency Director Anthony Star says that despite a glut of interest in new solar incentives, the state is far from meeting annual interim goals meant to keep it on track for 25% renewable electricity by 2025.

Under the 2016 Future Energy Jobs Act (FEJA), Illinois should be nearing 17.5% renewables by the 2020-21 fiscal year. But at recent workshops, Star said the agency predicts it will only have enough to cover about 8% of the state’s load.

That includes a flurry of projects funded by FEJA that are expected to come online in the coming months. The law ordered the power agency to ramp up procurement of utility-scale wind and solar and also establish credits to spur distributed commercial, residential and community solar projects.

Star described some of the challenges as “growing pains” and said that overall he thinks FEJA’s implementation is “mostly going smoothly.” Still, more funding and policy fixes will likely be needed to meet the goals, he said.

The discouraging numbers in part reflect a change in the way the state accounts for renewable energy progress. FEJA shifted responsibility for complying with the renewable portfolio standard entirely to the Illinois Power Agency. In years past, alternative suppliers were responsible for meeting renewable energy goals themselves, usually through buying renewable energy credits on the marketplace, often from out-of-state generation.

The credits under FEJA incentivize new, in-state construction or out-of-state projects that have a direct impact on Illinois residents and air quality. That makes it potentially more expensive to acquire them than if — for example — inexpensive credits from Texas wind projects could comply.

Star said that while the power agency’s responsibility for procuring renewables for all retail customers has moved the goal posts much farther afield, the change has addressed a long-standing problem with Illinois’ renewable portfolio standard. Since customers often switch between utilities and alternative suppliers, when only funds from utility-supplied customers were available to the power agency for renewable procurement, it couldn’t predict future funding levels and struggled to make long-term renewable investments. Now that has changed.

“The goals have gotten much larger — prior to FEJA we were only procuring for customers who were approximately 20% of total load of the state, and [alternative retail suppliers] complied separately — mostly by buying the cheapest [renewable energy credits] they could find,” Star said. The power agency “couldn’t do long-term planning because we didn’t know what budgets were available. Now we no longer have that budget uncertainty.”

The power agency is slated to release its draft procurement plan in August; public hearings will be held in Chicago, Springfield and Moline in September.

New Jersey-based Soltage is among many national developers who hoped to use the sale of renewable energy credits created by the Future Energy Jobs Act to fund solar investments in Illinois, specifically in the community solar category that allows projects of up to 2 megawatts.

Developers flocked to the community solar program and submitted exponentially more applications for projects than credits were available to fund them. A lottery was used to decide which projects would be funded.

Soltage proposed 20 different projects in Illinois, and only one was chosen in the lottery. Some developers were unhappy about putting much work into applications only to not be chosen, and they complained that there was no mechanism to prioritize more viable or beneficial projects. Other developers were satisfied with the lottery program.

The glut of interest in the program and the lack of funding to meet the demand for renewable energy credits has led to much talk of a possible “boom and bust” cycle in Illinois, similar to other states that launched incentive programs. The money available for credits apparently is being spent more quickly than drafters of FEJA may have planned given the massive interest. In all, $548 million over five years is now allocated to the community solar adjustable block program.

“We would like to do business in Illinois long-term but some of the writing on the wall from the recent IPA workshops would indicate that the money available for the adjustable block program is insufficient to keep it going despite the state law,” said Jonathan Roberts, Soltage vice president for Midwest development, who previously worked on community solar in Minnesota where similar challenges transpired.

“It does seem like a lot of the money is going to be committed very early and spent very early. We might have some kind of boom-bust cycle on our hands unless we get some kind of legislative fix.”

Meanwhile, Star said — and his data indicates — that the FEJA solar credits, specifically for community solar, have gotten a disproportionate amount of attention compared to their role in meeting clean energy goals. In a power agency slide showing renewable energy credit predictions from the present through 2030, the adjustable block program makes up only a small fraction of renewables compared to competitive procurement of utility-scale projects.

“Maybe we need to take a moment to think about what are we trying to achieve with community solar,” Star said. “A lot of people thought the church would be getting solar capacity for their parishioners, and instead we have these big projects on greenfield sites. And yet you would need tens of thousands of megawatts of community solar at 2 megawatts each [to meet goals]. Two megawatts sounds huge because for so long there was so little solar in the state, but when we start thinking big it doesn’t seem so big.”

Two bills meant to increase funding for renewable energy were proposed this spring but didn’t pass before the Legislature closed at the end of May.

Both bills call for eventually getting 100% of Illinois’ energy from renewables, which seems a distant goal given the roadblocks in meeting much less ambitious goals thus far. One bill, known as Path to 100, was widely supported by the solar and wind industry. Another, the Clean Energy Jobs Act, was backed by the Illinois Clean Jobs Coalition made up of environmental groups, labor unions and grassroots groups that played a major role in passing the Future Energy Jobs Act.

Now stakeholders will try to build support and refine draft legislation in hopes of passing legislation during brief sessions in the fall.

“Unfortunately you have a variety of interests; you need to find a balance between all of them,” said state Rep. Will Davis, lead sponsor of the Path to 100 bill. “During the regular session [ending in May] we weren’t necessarily the priority issue, but nevertheless this is something we know we need to do and we look forward to come up with a piece of legislation that tries to meet all the needs.”

Both bills recognize more funding is needed to drive renewable development, be it utility-scale wind and solar or distributed solar.

“We have to ask ratepayers to do more,” Davis said. He added that utility companies also need to recognize that “in addition to how they currently [get] power, there’s a need for other mechanisms, i.e. wind and solar. I would argue … that maybe these companies can fund these efforts as well. … If they believe in what we’re trying to do they could put more skin in the game.”

Lewis Butler is sales manager for Simpleray, a Peoria-based company that has up to 10 megawatts worth of commercial solar projects in the works in Illinois after receiving incentives under FEJA, including at farms, a deli and a dog treat bakery.

“FEJA has worked incredibly well — there’s an army of installers out there who a few years ago didn’t know what solar was,” he said. “The question is what’s going to happen next. … You get all this momentum and then there’s the potential for it to come to a grinding halt. We’re going into family-owned businesses and asking them to make this financial commitment of a couple hundred thousand, a million dollars, and if we don’t know what the incentives are going to be or not be, they can just go buy a different piece of machinery — they don’t need to take risks like that. [The uncertainty] just raises the bar we have to clear in order for it to make sense for them.”