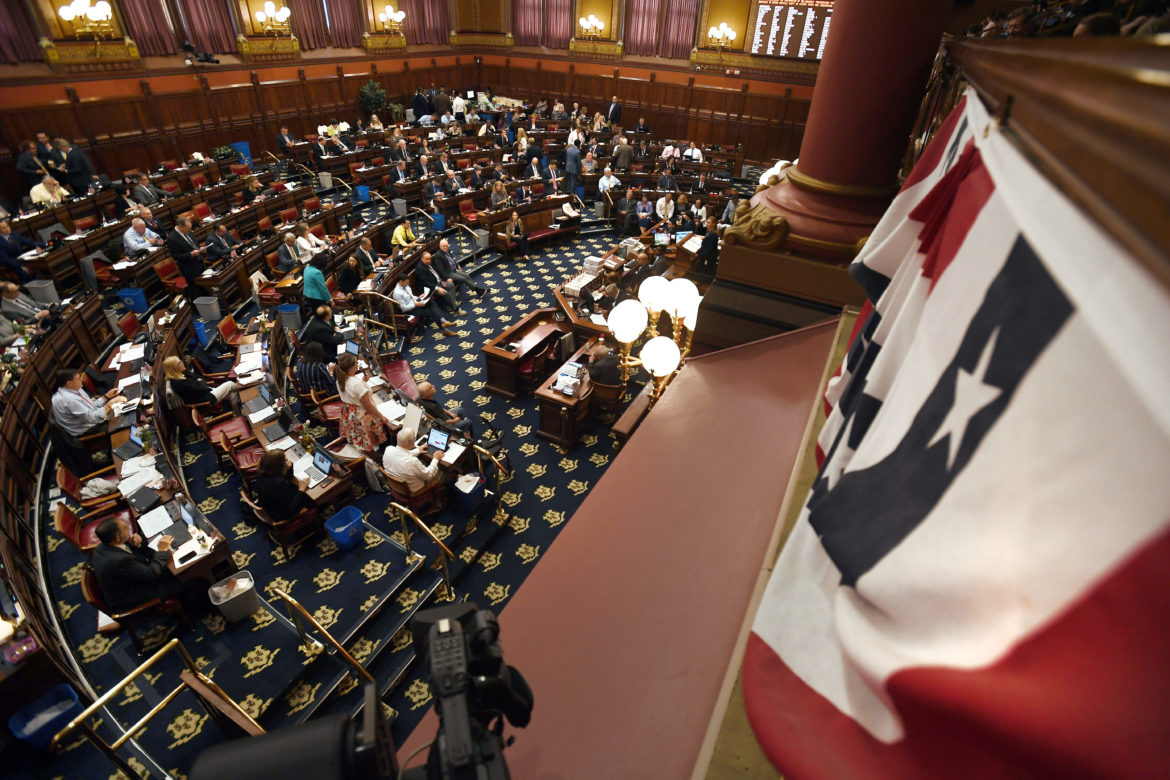 Connecticut legislators meet inside the Hall of the House during the final day of session at the State Capitol in Hartford, on June 5.

Advocates in Connecticut are working to better educate state lawmakers on the benefits of energy efficiency programs.

The state of Connecticut siphoned tens of millions of dollars last month from a program that helps residents and businesses save energy.

It was the second such withdrawal in two years, the result of a 2017 decision by state lawmakers to raid efficiency funds to balance the state budget.

Meanwhile in Vermont, a similar efficiency program is expanding after Gov. Phil Scott signed a bill directing leftover funds to be reinvested in the program.

What’s the difference? While each state is unique, advocates say it’s a matter of priorities and keeping lawmakers informed on the financial payback from energy efficiency spending.

In Connecticut, energy efficiency efforts have been largely overshadowed in recent years by the state’s “big push” to get homeowners to switch from oil heating to natural gas, said Amy McLean Salls, Connecticut director for the Acadia Center. A lack of awareness around the payback from energy efficiency programs left the funds vulnerable to diversion, a circumstance advocates worked hard to correct during the most recent legislative session.

No additional diversions were included in Connecticut’s 2020-21 budget, but advocates are continuing to challenge the raids in the 2018-19 budget in a lawsuit now before the U.S. Court of Appeals.

A legislative fix prohibiting future raids seems unlikely, they say. Instead, they are hoping that their intense lobbying efforts this year will help ward off more raids by helping to close the knowledge gap in lawmakers’ understanding of energy policy.

“I met with countless legislators this session,” said Leticia Colon de Mejias, chief executive of Energy Efficiencies Solutions and a plaintiff in the lawsuit. “Why our legislators are not focused on expanding residential efficiency is that they don’t understand the value.”

Rep. Jonathan Steinberg, D-Westport, who sits on the Energy and Technology Committee, said he believes that it was ignorance as to the overall impact of the funds sweep that contributed to lawmakers’ approval of the plan in the first place. That, and desperation.

“I like to believe that our revenue picture is improving, and philosophically, most of us are averse to the idea of raiding these funds, with a few exceptions,” Steinberg said. “But I can’t say for certain that we won’t get desperate again.”

It marked the third time the state has dipped into the energy efficiency and clean energy funds since the law authorizing their creation through utility bill surcharges was passed in 1998.

The two previous diversions were minor by comparison, at $30 million and $12 million. This time, energy efficiency advocates were so alarmed by the size of the sweep that they sued the state in federal court to try to recover the funds.

“The ratepayers have been contributing to these funds for years, and because of their success in investing in clean energy, conservation and renewable energy, the state had been making tremendous progress,” said Stephen Humes, a lawyer with Holland & Knight, the firm representing the group of environmental organizations, energy efficiency businesses and ratepayers that is suing the governor, treasurer and comptroller of Connecticut. “The plaintiffs decided to go to court because this was a terrible setback.”

In Vermont, the picture is dramatically different, as lawmakers there expanded the state’s efficiency program to more than double the number of homes it serves in the coming year.

H63, passed by the Legislature this year, raises the income threshold for some programs to allow greater participation of moderate-income homeowners for a limited time period. The law directs an additional $2.6 million to be spent by Efficiency Vermont on home weatherization efficiency over the next 18 months.

The majority of the $2.6 million is a redirection of Efficiency Vermont’s existing budget. Foster said an unspent $2,250,000 — the result of cost-cutting efforts — from the agency’s three-year budget cycle was moved to the weatherization program. An additional appropriation in this year’s state budget of $350,000 was also added.

“With the signing of H63, Efficiency Vermont was provided with more flexibility to deploy our existing budget to meet Vermonters’ greatest needs for saving energy,” said Rebecca Foster, director of Efficiency Vermont. “Vermont has a huge need for weatherization across all income levels, and the changes in H63 enable Efficiency Vermont [to] play a greater role in solving that problem and reducing energy costs in the state.”

Efficiency Vermont is supported by a surcharge on electric bills paid by all ratepayers, totaling approximately $50 million.

Foster said lawmakers tend to be keenly aware of the value of their various programs, partly because so many of their constituents have benefited. Some 100,000 households and 15,000 businesses participated in Efficiency Vermont services in 2018 alone, a significant penetration rate in a state of just 630,000 people, she said.

She also noted that Vermont voters recently elected “a new freshman class” of lawmakers who ran on making climate change a top priority.

“We set up a structure to determine how we want to work with our efficiency utility, one that’s been a raging success and saved electric ratepayers millions of dollars,” Pearson said.

“On the other hand, we have expertise using efficiency, so we can set up a transition structure where our PUC can work with Efficiency Vermont to see how they can get into the thermal space. That’s enormously exciting and will have far-reaching impact.”

In Connecticut, whether state lawmakers can just reappropriate funds collected from ratepayers is still being disputed in court.

The lawsuit, filed in U.S. District Court in 2018, argued that the state violated the contract clause of the U.S. Constitution in taking the funds. The judge disagreed, and ruled for the state. The plaintiffs appealed, and the case is now before the U.S. Court of Appeals for the 2nd Circuit.

Humes’ legal reasoning is this: It’s generally accepted law that heavily regulated industries are entitled to certain contract protections. For utilities, those protections are included in the tariffs they must submit for approval from regulatory authorities. The tariffs include approved rates and terms of service, as well as a section spelling out the utility’s limitation of liability.

“It’s very common where utilities have pointed to the tariff as justification for charges or terms that protect them from liability, like losses customers might suffer due to loss of power during a storm,” Humes said. “Here, we are saying that customers have rights too. In this case, customers were asked by the utility to pay for these programs, as required by the state. Customers did that, and they are entitled to have the funds used in that way, or have the money returned to them.”

The U.S. District Court judge ruled, however, that the legislation establishing the funds does not set up a contractual obligation as to how the funds will be used.

And in its appeals brief, the state argues that those statutes “merely set forth a legislative policy on how much money the state should spend on energy efficiency and clean energy programs,” and did not “create a contractual right with ratepayers that would limit the use of the funds” solely to those programs.

But Humes maintains that the issue isn’t whether the state established a contract with ratepayers, but that it “invaded” the contract between utilities and ratepayers.

“The state acts as if the state itself is holding this money and simply changed priorities,” he said. “What they refused to acknowledge is that the money was in the hands of third-party electric utilities. The state literally stole the money.”

The Connecticut Fund for the Environment, one of the plaintiffs in the case, helped lead a lobbying effort to try and persuade the Legislature to reverse the June transfer this year. That effort failed. Legislation calling for the statutes that created the funds to be amended to prohibit the diversion of funds also went nowhere.

“Lawmakers say, we don’t like to tie our hands,” or those of future legislatures, Colon de Mejias said. “They like to be able to use the money for whatever they want.”

However, the current governor, Ned Lamont, who came into office this year, stayed true to his pledge not to raid the funds.

The state’s Energy Efficiency Board, which advises the utilities in their use of those funds, estimated in a 2017 report to the Legislature that the raid of the energy efficiency fund alone would result in an estimated $275 million in lost bill savings, and the loss of access to energy-efficiency improvements for 13,000 homes, including 5,600 low-income households.

The cuts have also resulted in significant job losses among energy efficiency contractors, though they are difficult to quantify, Colon de Mejias said. She said she has laid off seven workers herself, and knows of other companies that moved operations to Massachusetts or simply shut down.

J. Brendan Sharkey, a former speaker of the House who served in the Legislature for 16 years, said the legislative “knowledge vacuum” around energy policy has allowed “bad things to happen,” like balancing the budget with the funds raid and, last year, passage of a law that would have ended net metering for solar users this year. Faced with another backlash, legislators this year voted overwhelmingly in favor of reversing that law.

Mike Trahan, executive director of Solar Connecticut, an industry group, said he revived a bipartisan clean energy caucus this year as a way of “deepening the bench” and raising understanding.

“We’re educating as best we can,” he said.

Meanwhile, Humes is keeping his fingers crossed for a precedent in the appeals case. Oral arguments will likely be scheduled in the fall.

Otherwise, he said, “the only alternative I know of is through the political process — people need to make clear to their elected representatives that this raiding of dedicated funds is totally unacceptable and needs to stop.”