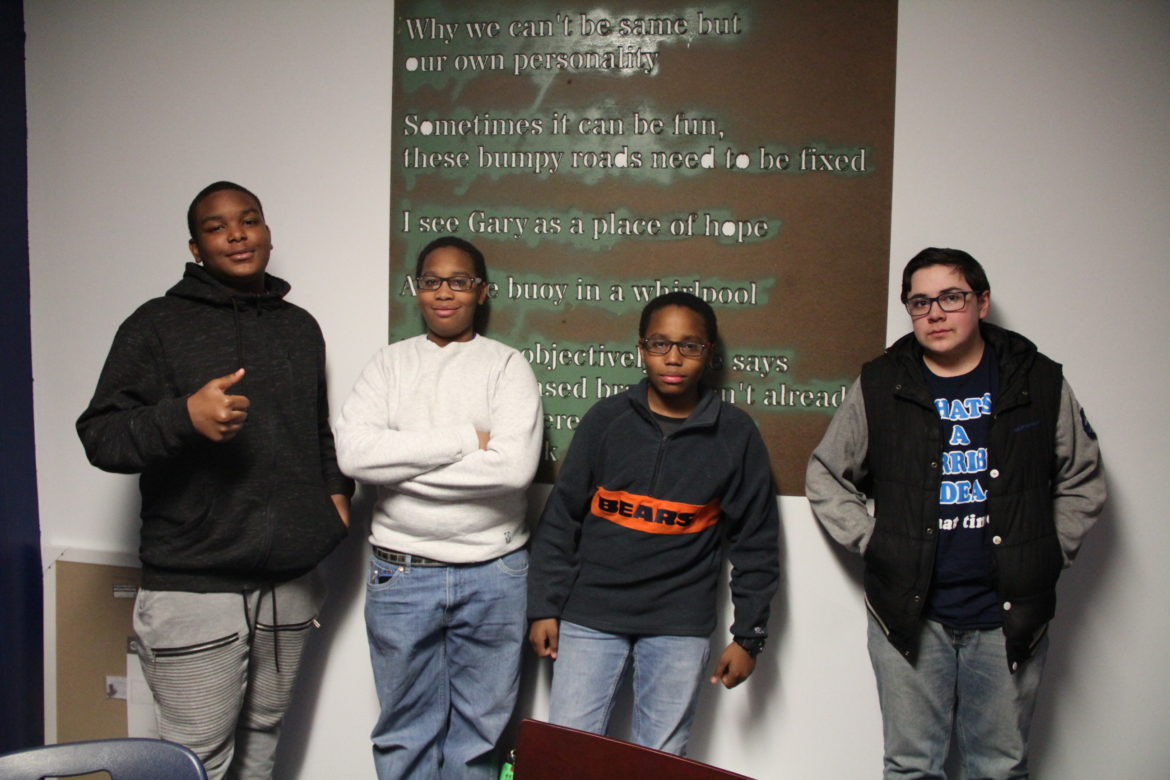 Steel City Academy students Marshawn Severson, Evan Addison, Erin Addison, Andrew Arevalo are producing a podcast about their fight against a planned waste facility next to their school.

The waste-sorting operation would produce material that could be turned into an energy feedstock by customers.

Evan and Erin Addison and Andrew Arevalo spent much of their eighth grade year organizing, lobbying, rallying and reporting to prevent a “dump” — as they describe it — from being built across the street from Steel City Academy.

The upstart Gary, Indiana, charter school sits amidst verdant woods and wetlands at the site of a former mental health facility. With guidance from principal Katie Kirley, the boys and other students made sure that City Council members and other elected officials knew how the truck traffic, emissions and other impacts of the proposed solid waste facility would harm students. And they underscored that while the project was called Maya Energy and billed as an environmentally friendly waste-to-energy operation, actual business plans filed with the state called for no energy generation.

Now as they get ready for their sophomore year, the students grapple with disappointment and cynicism, mixed with determination to keep fighting.

“I thought we had it over and done with — I thought they wouldn’t come back,” said Evan Addison, 15, a minute older than his twin brother, Erin. “I knew politicians, maybe not all of them, but it’s kind of known they’re there for money and don’t always try to do what’s right. But it was a surprise because I thought we had beat them.”

“It’s upsetting,” said Arevalo, 15. “I learned that people can lie and still get their way.”

For the past few years, the boys have been recording their daily lives and producing a podcast, with the fight against Maya Energy playing a central role. They recorded as they delivered records requests to City Hall, and attended rallies and public meetings. The New York Times named their work one of the nation’s 10 best student podcasts. In a recent piece on National Public Radio, they talked about their work and the latest turn of events.

The council’s decision hinged on the company’s argument, in the lawsuit filed in January, citing a state law prohibiting the revocation of land use proposals within three years of an initial approval, if secondary permit applications are underway. The council’s February 7-0 decision reinstated the company’s needed zoning variance and cleared the way for it to continue seeking a solid waste permit from the state, which was awarded several weeks later. The lawsuit also alleged defamation and charged that the city caused the company undue financial hardship.

Thomas Frank, an environmental justice watchdog in Northwest Indiana, blamed local politics and influence for the switch. A spokesperson for the city declined to comment, citing ongoing litigation. Maya Energy representative Matt Reardon and his attorney did not respond to requests for comment. Reardon is the husband of state Rep. Mara Candelaria Reardon, who represents the area adjacent to Maya Energy’s proposed site.

“It’s just a terrible disappointment,” Frank said. “It’s one of the things that make you recognize that the industry players have all the money, the community has no money, so the players are able to outlast the community. When the community is fighting for environmental justice, [industry] can keep out-maneuvering them … and hire on as many attorneys as needed.”

Project head Jimmy Ventura, a former city council member in nearby East Chicago, Indiana, told the Energy News Network last year that about half of the waste coming into Maya Energy would be turned into energy feedstock, known as “refuse-derived fuel.”

Speaking separately, Reardon last year told the Energy News Network that the facility would not produce refuse-derived fuel, though other companies could buy their sorted waste and make fuel out of it themselves. “This really is not an energy project — this is a municipal recycling facility, a green manufacturing project,” Reardon said in 2018.

Ventura said the $50 million project would create 124 well-paying jobs and tax revenue, and described it as a way to revitalize the area where he grew up. But opponents said they don’t want more heavy industry in Gary and don’t want to be a dumping ground for waste from Chicago and other areas.

“It’s just undeniable that the no-good dirty industries have been concentrated here, and a lot of that is through land-use planning,” Frank said. “[Industry players and politicians] have a monopoly over that process, where they can make decisions in terms of shifting land use and the community’s not quite up to speed in understanding what’s going on or even having heard about it.”

The Addisons said they estimate about half of Gary residents know about Maya Energy, and others are unaware. They want to keep letting people know about the facility and what it represents for young Gary residents hoping to change the trajectory of their hometown.

While the boys said they are frustrated by the turn of events, they said the lessons about organizing and environmental justice that they learned will continue to bear fruit regardless of the Maya Energy outcome.

“We’re going to keep everybody updated on what’s happening, and how it affects Gary,” Erin Addison said.

“We’ll watch for other companies, and I’ll just fight for what I believe is right,” Evan added. “This has taught us how things work, and that you have to fight for things, and be repetitive in your opposition. I want to still be part of the fight, and do my best.”