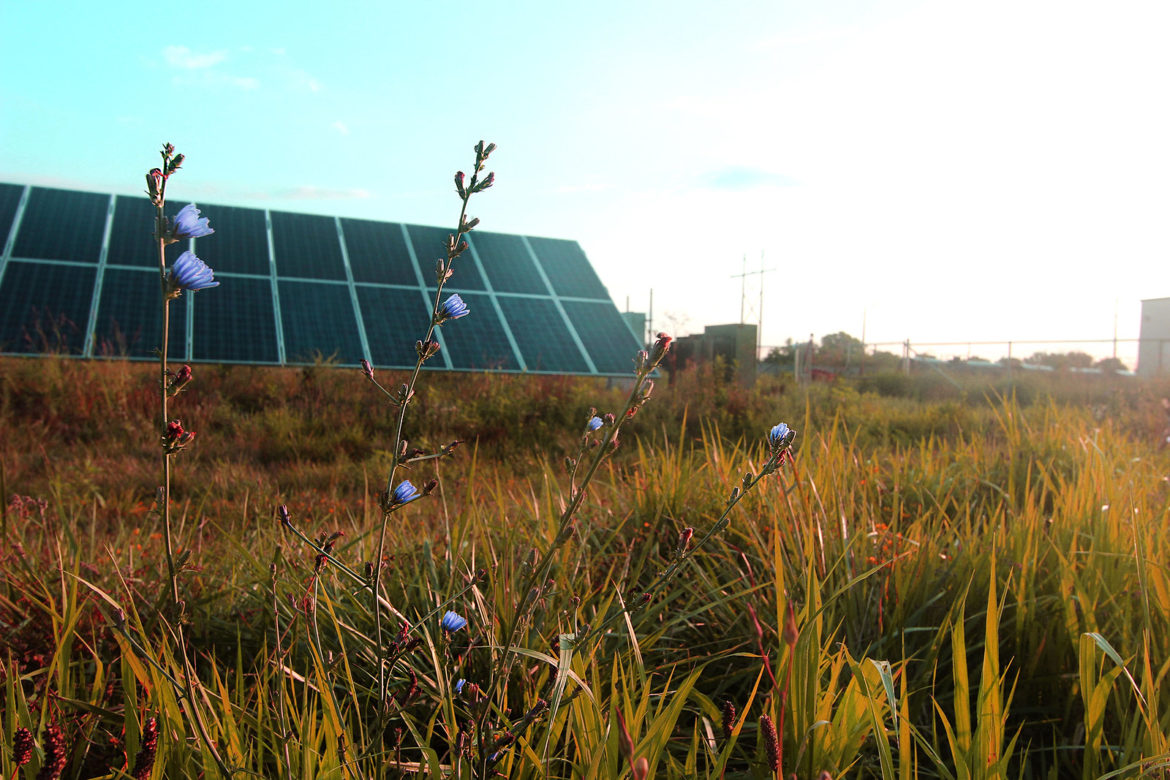 Wildflowers grow near solar panels in Columbia, Missouri. Across the state, in Joplin, the Empire District Electric Co. is making a big statement on clean energy.

Liberty Utilities-Empire District wants to retire its coal plant early and replace it with cheaper wind, solar and storage.

Liberty Utilities-Empire District in Joplin, Missouri, serves about 173,000 customers in southwestern Missouri and parts of Kansas, Arkansas and Oklahoma. Its current capacity consists of about 65% natural gas, 30% coal and 5% renewables in the form of wind and hydropower.

The utility foresaw little change to that generation mix in its 2016 integrated resource plan. The long-range plan indicated no new resources until 2029, when it planned to add 100 megawatts each of natural gas and wind power, followed by small additions of both in the following decade.

Then, in 2017, Empire was acquired by Liberty Utilities, a subsidiary of a Canadian firm called Algonquin Power & Utilities Corp. What followed was an aggressive pivot to renewable energy. The company proposed to build 800 MW of wind power and close a 200 MW coal plant 16 years ahead of schedule — moves Liberty said would save ratepayers as much as $325 million over 20 years.

After pushback from state regulators and consumer advocates, the company opted to keep the coal plant open for now and scale back the amount of new wind capacity to 600 MW, which is expected to come online in 2021.

The utility’s next big statement on clean energy came last month in its 2019 integrated resource plan. In it, Liberty-Empire proposes to retire the 200 MW Asbury coal plant by the end of the year and over the next two decades add hundreds of megawatts of wind, solar and storage.

“It’s night and day from what Empire used to be,” said James Owen, executive director of Renew Missouri, a nonprofit that advocates for clean energy.

The company in its filing says the plan is the result of an 11-month effort “to assess, with great care and diligence, how it can best meet its customers’ needs for low-cost energy that is highly reliable, safe, resilient and environmentally sustainable.” It studied 16 different potential resource mixes before settling on one heavy on both distributed resources and utility-scale renewables.

The plan calls for retiring the company’s coal-fired Asbury power plant as soon as the end of 2019. The power plant has significant maintenance and operations costs and after 2020 will require a $20 million investment in new equipment for handling coal ash. “Even assuming some value for Asbury’s capacity, lower-cost alternatives exist for meeting Liberty-Empire’s requirements.”

Specifically, the utility says solar, wind and storage can provide the same generation at a lesser cost than its coal plant. The company says it expects to take advantage of federal tax credits for solar, but even without them it projects solar will be a cheaper alternative than continue to operate a coal plant.

For the first time, the utility’s plan calls for a significant investment in distributed resources — smaller solar and storage installations strategically around its territory. The systems cost 12% to 14% more than utility-scale projects, the company says, “but with the benefit of potentially significant deferred substation upgrades and avoided transmission line losses.”

A spokesperson for the company said the plan is in part a response to feedback from customers, some of whom testified in favor of its wind farm investment.

“We have witnessed a growth in customer desire for clean energy generation,” Jillian Curtis said, noting that about 2,100 Missouri customers are collecting company rebates for rooftop solar installations, which now total 29.5 MW.

Algonquin Power did not respond to interview requests.

The Missouri Energy Consumers Group, which represents the state’s large electricity users, is apprehensive about costs associated with the plan.

The Missouri Energy Consumers Group is supportive of increasing renewables “so long as it is done in an economical manner,” said David Woodsmall, an attorney for the group. “MECG does not support those initiatives when they result in unnecessary rate increases.”

There is no price tag as part of Empire’s vision. Financial and other specifics will surface when the utility seeks permission from state regulators to fulfill the integrated resource plan, probably in the form of multiple rate cases.

Owen said Empire-Liberty is becoming a leader in Kansas and the Midwest when it comes to planning for a clean energy future. Said Owen: “If I was running a utility company in Kansas City or St. Louis, I’d be embarrassed that a little company in Joplin was being more forward-thinking than I was.”