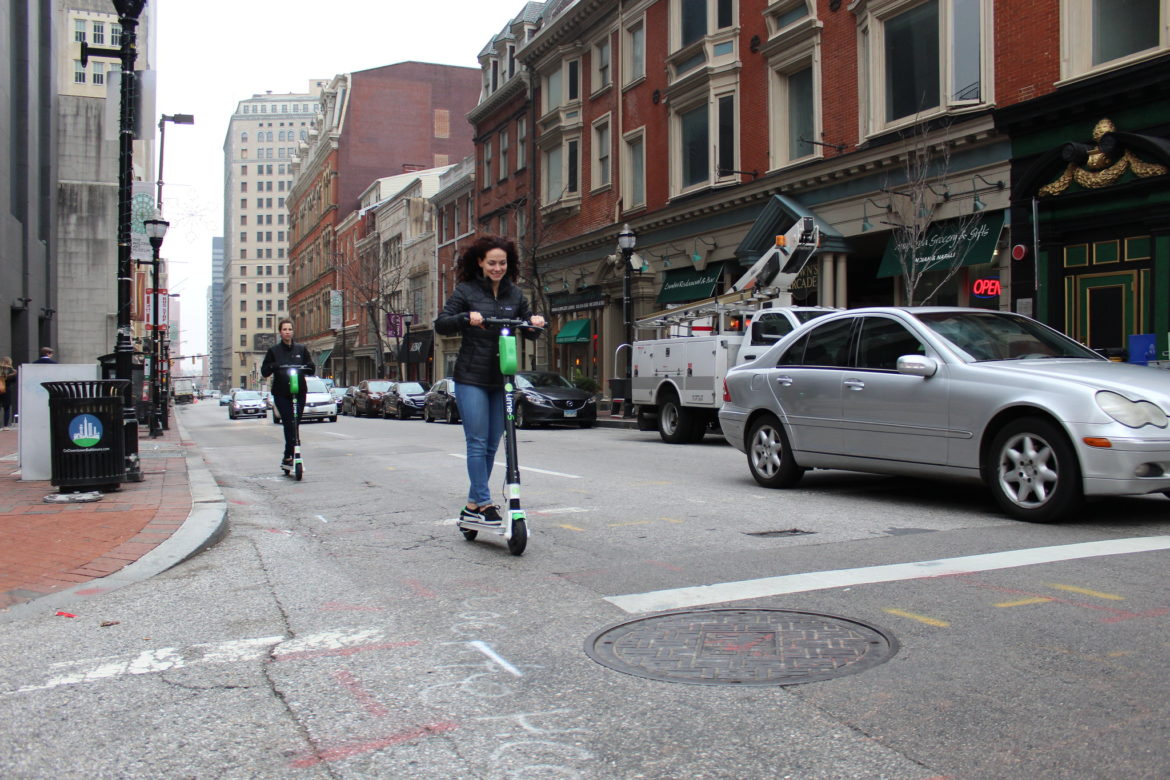 A pair of scooter riders travel down a street in Baltimore, Maryland.

Electric scooters have taken cities like Raleigh, North Carolina, by storm in the last year, propelled by an allure of convenience and environmental sustainability.

But a new analysis, published today in the journal Environmental Research Letters, finds that scooters actually increase carbon pollution more often than not.

Thought by its authors to be the first of its kind, the peer-reviewed study from North Carolina State University shows scooters create half the pollution per mile that gasoline-powered vehicles do. The problem: scooter trips only supplant car trips a third of the time.

Even so, experts say the nascent electric scooter industry has the potential to both invert that fraction and reduce its overall life-cycle emissions.

“If these scooters are definitely replacing cars, that can be a great thing,” said Joe Hollingsworth, who authored the study while an engineering master’s student at N.C. State. “But there’s still a lot of room to improve.”

Investigating the claim of ‘carbon free’

Hollingsworth, undergraduate Brenna Copeland, and their professor Jeremiah Johnson began their research last year after both Lime and Bird scooters descended on the streets, seemingly overnight. They noticed that a phone notification from Lime told users their ride was “carbon free.” That sparked the question: Really?

“This was something everybody was talking about,” said Johnson, whose research focuses on life-cycle assessments. “We got excited by the idea of investigating that claim.”

Lime makes the carbon-free assertion, a spokesperson said, because it buys enough renewable electricity and achieves other pollution reductions to make up for charging, maintaining and repairing its scooters. But the N.C. State trio sought to peg scooters’ total environmental costs without such offsets. They purchased and took apart their own electric scooter, surveyed workers who recharge the scooters, and polled riders in Raleigh.

On average, they found scooters cause 202 grams of climate pollution per mile. Because early models tended to last less than a year, their production made up half of their life-cycle impact. Daily collection for charging and redistribution with mostly gasoline-powered vehicles made up another 43%.

“While the scooters themselves don’t have tailpipes,” Johnson said, “the cars that were picking them up largely did.”

Scooter emissions are much less than the 414 grams produced per mile in an automobile. But, consistent with Lime’s own data and other surveys, riders polled in Raleigh said scooters replaced cars only about a third of the time. The rest pointed to modes cleaner than scooters: Nearly half said they would have walked or biked instead, and about a tenth would have taken a public bus.

Using this survey data, researchers established a benchmark amount of pollution scooters could emit and still be environmentally beneficial. The study assumed each scooter mile displaces .34 miles in a car, .11 miles on a public bus, and .08 miles on a personal bicycle. The scooter would need to create less than 150 grams of pollution to best the modes it was displacing.

The scooters’ lifetime emissions depend on a range of factors, from the type of electricity used to charge them to the distance they travel to get charged. Researchers examined a number of scenarios and found pollution levels exceeded the 150-gram benchmark 65% of the time.

The report authors say companies have many tools to reduce the climate footprint of their scooters. Making and employing vehicles that can last for two years would make the biggest difference, followed by more efficient collection and distribution systems to cut the driving distance needed to charge scooters.

Of the two scooter start-ups examined in the report, only Lime will continue to operate in Raleigh after this week (at N.C. State only; a different company will operate in downtown). Reached for a reaction to the analysis, the company pointed out its small sample size and questioned some of its assumptions; for example, the researchers failed to consider routine maintenance of scooters or “broader environmental benefits” like reduced traffic congestion.

But Lime didn’t dispute the basic thrust of the research — which aligned with some of its own internal assessments — and said it was already implementing the report’s recommendations.

“Sustainability is core to Lime’s mission,” it said in a statement, “and we’ve already taken steps to reduce our environmental impact, including streamlining our charging operations, powering our scooters with 100% renewable energy, offsetting the emissions from fleet vehicles, and establishing a robust repair and reuse program to extend the life cycle of our products.”

City governments can also influence scooters’ lifetime emissions through measures such as policing vandals and allowing fully-charged scooters to remain out overnight, the report said.

“What we saw in our data collection for Raleigh was that about one out of six of the scooters were nearly full when they were picked up each day,” Johnson said. Still, he acknowledged, “the biggest lever here would be if you displaced more car miles traveled.”

That may be where cities can make the biggest leap toward maximizing scooters’ environmental benefits, by building more bike and scooter lanes and installing traffic calming measures to make non-automobile drivers feel safe.

“Scooters are making people think differently about transportation,” she said. “Folks are driving slower in downtown because they know they have to watch out for scooters now — which means they’re also watching out for bicyclists and pedestrians.”

But Stewart said the sudden arrival of scooters also showed how the city was still lacking in connected bike lanes, parking spaces for scooters and bikes, and other multimodal infrastructure. “All of that would be better for everybody,” she said.