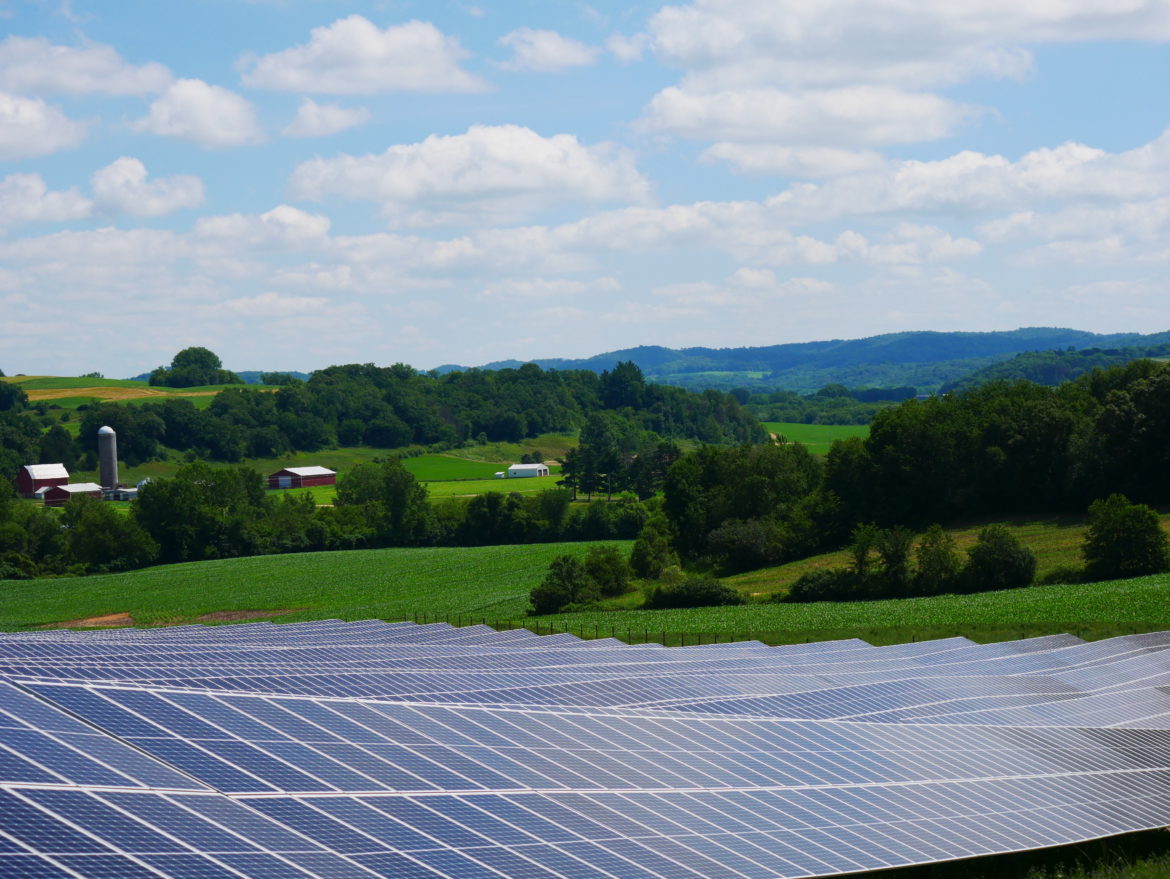 The largest installation of the Butter Solar Project, in Arcadia, Wisconsin.

Organic Valley’s project expanded into a complex partnership that it hopes can be replicated by others.

As Wisconsin’s largest-ever solar project comes online this summer, the multi-site, multi-state partnership behind the development offers a potential model for how organizations can band together to meet clean energy goals.

The Butter Solar Project consists of 32 megawatts installed at 10 locations feeding into 13 municipal utilities in three states. A who’s who of co-op grocery store shelves including Organic Valley, Dr. Bronner’s and Clif Bar have signed on to buy the renewable credits along with the city of Madison.

It all started with a quest by Organic Valley to operate on 100% renewable energy before the project mushroomed into a much larger initiative, said Eric Udelhofen, project director for the developer, OneEnergy Renewables.

The complex arrangement offers a potential playbook for companies in regulated markets that cannot set up contracts with power suppliers for clean energy, Udelhofen said.

Organic Valley had previously partnered with a healthcare system on a 5-megawatt community wind farm near its Cashton, Wisconsin, office. It’s also provided financial assistance to more than 200 farmer members to install solar arrays on their dairies. Achieving 100% renewables, though, required something on a bigger scale.

A complex deal comes together

The dairy cooperative initially wondered whether one of its power providers, Cashton Municipal Light & Water, could create a renewable energy tariff specifically for Organic Valley. Wisconsin is a regulated state, though, and an arrangement for a specific company would have to be approved by the Public Service Commission. Organic Valley and its developer concluded that could take a while and the result would be unpredictable.

Cashton is part of a buyer’s organization called the Upper Midwest Municipal Energy Group. The utility floated the idea of other municipally owned utilities participating, too, Udelhofen said. Having more utilities would offer economies of scale and create more business for his company.

Nearly all of the municipal energy group’s members — 13 of 16 — wanted to be part of the project. The organization agreed to let OneEnergy Renewables keep the renewable energy credits to help pay for the projects. Installations at the participating utilities matched their minimum electricity loads, he said, representing around 10% to 20% of their total output.

The solar arrays matched to their minimum load meant that during sunny days, they would not have to push excess electricity onto high transmission lines and incur costs. They were large enough, though, for utilities to add to capacity power reserves that can be used if they sell power to the regional transmission operator, MISO. Members can shave their peak demands and receive payments from MISO for the capacity value.

Richard Heinemann, an attorney for the Upper Midwest Municipal Energy Group, said members were interested not so much because of the environmental benefits but due to the favorable economics. They liked the idea of working with Organic Valley and the city of Madison, the electricity’s competitive price, the opportunity for MISO capacity payments, and a clear regulatory path, he said.

“It made sense economically,” he said. “It’s a signal that green energy is, from a cost standpoint, competitive [with fossil fuel sources]. That’s what our members, beyond the environmental benefits, care about.”

The next step was to find buyers for the renewable energy credits, usually a process done after a project is completed rather than before ground is broken. Around the time the credits became available, the city of Madison passed a pledge to have all of its operations powered by renewable energy by 2030, Heinemann said.

Madison signed on to purchase 14 MW. Dr. Bronner’s, a California natural soap company, agreed to buy 1 MW. NativeEnergy purchased the rest and resold the credits to several companies, among them Clif Bar & Company.

Butter Solar’s renewable energy credits were priced and sold to cover 25 years instead of the usual two- to three-year timespan. “These were long-term REC contracts signed before construction and they were integral to the financing,” he said.

Organic Valley continued to participate in selling credits to maintain momentum. “They were pivotal in selling all the remaining RECs,” he said. “They sent a representative to speak to Madison offices, and they brought in Dr. Bronner’s … and NativeEnergy.”

Once the contracts for the price of power and credits were signed, the federal government’s tariffs on Chinese solar panels came into play. BluEarth Renewables, which is owned by the Ontario teachers’ pension fund, then bought the project from OneEnergy.

Udelhofen and Stanley Minnick III, Organic Valley’s energy services and technology manager, both have speaking engagements lined up to talk about the project. The project was incredibly complex, they concede, but the benefits to rural co-op communities were also substantial.

Having created a template, they hope others can step in and use it. The ideal candidate for a similar initiative would be a company looking to buy renewable energy credits that could have a broader social impact on their state or region by adding solar projects that would not otherwise have been built.

“There’s not another organic food company in the world that’s 100% renewably powered, and our goal is that it doesn’t stay that way for long,” Minnick said.

By spreading the projects around a region, a developer can avoid some of the regulatory oversight that comes with larger solar installations, he said. It offers a wider benefit, too: greening and modernizing the grid of municipally owned utilities. Udelhofen said some of the utilities said their communities struggle to appeal to millennials, and having a solar installation gives visual evidence of sustainability in action. He added that the projects will also help to lower rates for nonparticipating customers of the municipal utilities.

For Madison, the project offered a chance to have renewable energy provide 37% of the city government’s electricity needs and a chance to support rural utilities within the state.

“This is an important part of the pie in our reaching our goal of being 100% renewable for city operations by 2030,” said Stacie Reece, Madison’s sustainability coordinator.

City officials also like the project because it supports renewable energy in rural communities largely in Wisconsin, and because without Madison’s participation “it may not have gotten off the ground,” she said. “It’s good for us economically. We’re looking at a price for the next 25 years for renewable credits that we could not have gotten without this project.”

The city invested $1.4 million in five solar installations in Wisconsin that are part of the initiative. The power generated from Madison’s credits produces enough electricity for 2,500 homes, Reece said.

Dean Bergstrom, general manager of Cumberland Municipal Utility, said his company is purchasing from the Butter Solar Project about 10% of its annual power needs. Since the utility also buys power from a wind project, the total electric load coming from clean energy will be around 30% to 35%, Bergstrom said.

“It’s a flat rate for 25 years,” he said. “So when the market starts rising, and that seems to be happening now, the electric and wind stays at a set price. It gives us a hedge, especially at the peak of the day. People around the area are excited about it too.”

Organic Valley bought enough credits to account for future expansion and move toward continued electrification of operations. “What I’m most excited about is the savings from these projects and how they can be shared among everyone in these communities,” Minnick said.