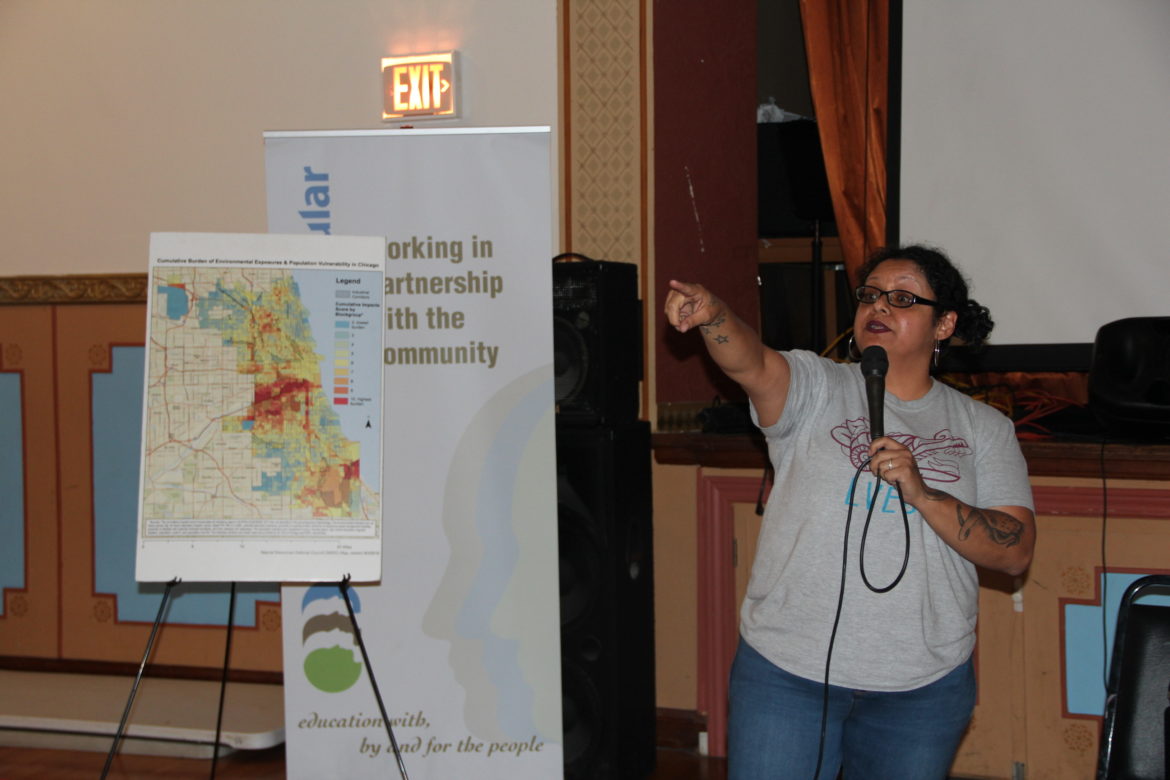 Note: This article has been updated to include a statement from Hilco Redevelopment Partners.

Seven years after the closure of the Crawford coal plant in Chicago’s Little Village neighborhood, the site is still a lightning rod for neighborhood activism and outrage.

At a community meeting Tuesday, residents demanded city and state officials and the global conglomerate that purchased the site install air monitors during remediation slated to start soon.

When a city public health official stoically explained that air monitoring isn’t considered necessary or typical in such situations, residents responded that this is no “typical” site. Rather, it is a symbol of environmental injustice in a heavily industrial and residential neighborhood where low-income, largely Mexican immigrant residents can’t bear any additional health burden.

The meeting was hosted by the Little Village Environmental Justice Organization (LVEJO), which led a decade-long campaign to close the coal plant.

Residents denounced Hilco Global, whose subsidiary purchased the site in 2017, for failing to send a representative, other than a public relations staffer who sat quietly in the audience. A poster of Hilco Redevelopment Partners CEO Roberto Perez, listing his email address, sat on a table alongside officials from the Illinois Environmental Protection Agency and Chicago Department of Public Health.

“It shouldn’t be our job to tell our neighbors what Hilco is doing,” LVEJO executive director Kim Wasserman said at the meeting. “Why is it on us and not the company that claims to care about our neighborhood? This is why we’re having this meeting — to let officials know this is a serious concern to us.”

A Hilco representative told the Energy News Network that the company has done much outreach to residents including creating a repository of relevant documents at the nearby public library and hosting a website, crawfordstation.com, which includes plans and updates. Hilco will offer two college scholarships per year to local students and has donated toys to a local organization, she added.

“Hilco Redevelopment Partners has a great deal of experience with brownfield redevelopment and an excellent track record of responsible remediation across the country,” Hilco said in a statement.

Hilco is proposing to remediate the entire 70-acre site to a level considered safe for human health and the environment, under the state’s voluntary site remediation program aimed at addressing liability concerns especially when site owners are seeking financing from banks or other investors. The program is “designed to be flexible and responsive to the needs of the Remediation Applicants” — the site owners — and “the goals and scope of actions at these sites are normally defined by the Remediation Applicants,” the Illinois EPA website explains.

“It’s important to note the limitations of this program,” Wasserman told the crowd, which included local Boy Scouts in uniform and about 60 residents, with LVEJO translating into Spanish for some.

“People don’t eat soil, but people breath air,” said one young woman, to cheers. Graham explained he was referring to people ingesting soil after touching it and not washing their hands. Residents and environmental attorney Keith Harley countered that remediation is bound to stir up much dust, which they see as an airborne threat both as particulate matter and because of the contaminants contained in it.

“The reason it isn’t a typical site is not only because of its location, but because of it being the first of its kind cleanup of an old coal plant in the state of Illinois,” Harley said. “This gives an opportunity for the state and the city to identify best practices for the next time.”

The remedial action plan proposed by Hilco and approved by the state calls for removing contaminated soil then installing engineered barriers, like concrete, asphalt or fresh soil, Hall explained. Residents were skeptical of city and state officials’ promise that the barriers would be occasionally inspected, and fines might be levied for any violations, in amounts likely less than $10,000 each, according to Graham.

Residents at the meeting also demanded testing be done on land and in the Sanitary and Ship Canal surrounding the site, to search for and deal with contamination that may have spread during the plant’s century of operation. The officials said that under state law, testing and remediation is limited to the site’s boundaries. And Hilco could have petitioned to seek official closure of a smaller portion of the site, in which case the program would not require the whole site to be tested or remediated. The state has ordered some additional sampling on-site to better understand the scope of the soil contamination.

“There are a lot of questions about how homes are being impacted,” Wasserman said. “Hilco came in talking about, ‘We are here to help the neighborhood.’ It doesn’t help when people don’t know whether their homes have been impacted.”

Graham told attendees that he has worked for years remediating heavily contaminated sites including former gas stations with soil soaked by solvents and petroleum, and air monitoring is never done or required during such remediation.

LVEJO policy director Juliana Pino asked the city Department of Public Health — which oversees environmental issues since the city’s environment department was eliminated under former Mayor Rahm Emanuel — to take further actions to protect residents during the Crawford remediation. She noted that the health department developed rules — albeit considered substandard by many residents — specifically to address concerns about the storage of petroleum coke and other bulk materials at industrial sites on the city’s Southeast Side.

“I ask you, is there room in the Department of Public Health’s regulatory authority to create rules specific to sites like this?” she said.

Residents were angry to hear of Hilco’s purchase of the site in 2017, since the firm is known for developing massive logistics hubs. LVEJO, the Natural Resources Defense Council and other groups have argued that hundreds of diesel trucks serving a warehousing center could present a greater risk to public health even than the coal plant.

Under state law, the site remediation program requires different tiers of cleanup for industrial or commercial versus residential sites, with more stringent requirements for residential reuse. Hall said the cleanup Hilco is proposing would also make the site suitable for a school or library. During a long stakeholder process involving residents, city officials and an architectural firm, residents had proposed reuse options including a solar farm, a park and a community commercial kitchen.

Hilco’s plans call for a business park which will be leased to a tenant, which locals expect will be a logistics operator. “We are extremely proud of the progress that has been made to date,” Hilco said in its statement to the Energy News Network. “The end result will be a one of a kind development from a sustainability perspective and include infrastructure to support electric vehicle charging stations, a roof design to accommodate solar panels, the implementation of bio swales, an extensive naturalized landscaping plan that includes approximately 669 trees and 430 shrubs which will absorb as much as 16 tons of CO2 per year, water efficient plumbing fixtures, interior and exterior LED lighting, an energy efficient building envelope, etc.”

A similar battle over remediation plans is likely to play out about five miles to the east of Little Village in Pilsen, home to the city’s other coal plant closed in 2012. Hilco has reportedly also purchased that site, which is also surrounded by homes and across the street from a park.

“There’s definitely going to be dust, and how do we know what the dust has in it?” LVEJO environmental justice education coordinator Karen Canales told the Energy News Network. “It seems like the Chicago Department of Public Health isn’t focused on public health. We understood the danger of coal when the power plant was operating, and now we want to understand any dangers we might be facing.”