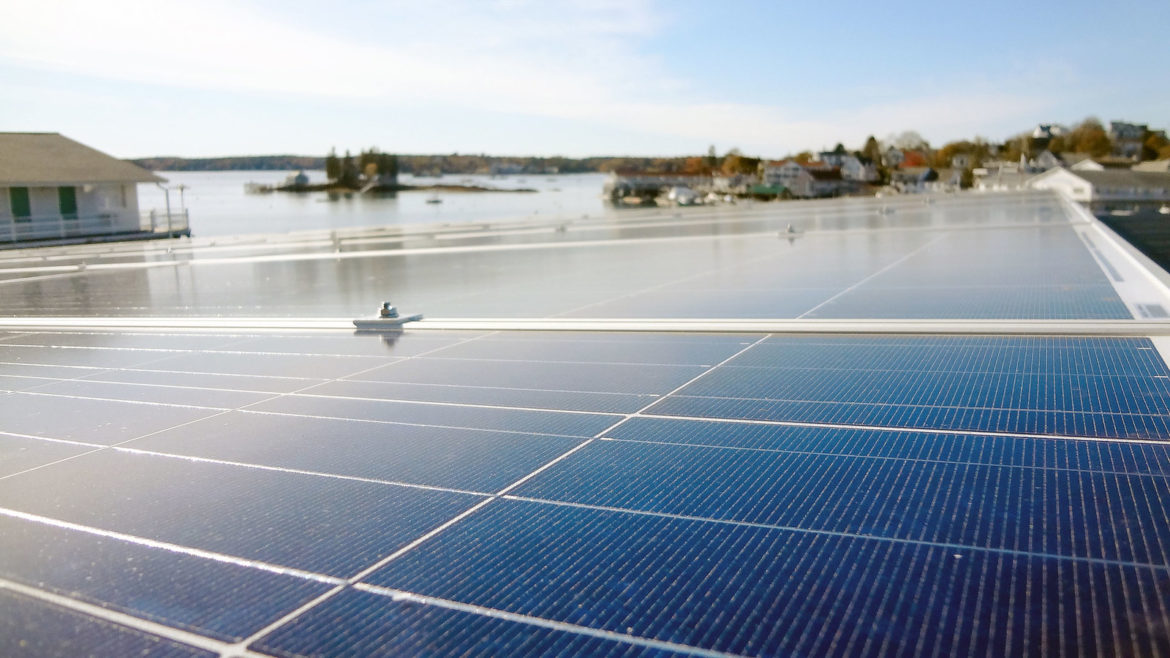 A pair of bills would require solar panels on new buildings but include exemptions for shaded or nonviable properties.

A pair of bills moving through the Massachusetts Legislature would require solar panels on most new construction in the state.

While some in the building and real estate industry argue the measures could make housing less affordable in a market that is already notoriously expensive, supporters say the move is necessary if the state is to meet its ambitious carbon-cutting goals.

“Our building sector is going to be one of the toughest sectors to fully decarbonize,” said Deborah Donovan, Massachusetts director for environmental nonprofit the Acadia Center. “We don’t want to miss any opportunities on buildings we’re going to be living with for the next 50 or 80 years.”

Massachusetts is about one-fourth of the way to its goal of reducing carbon emissions 80% by 2050. Most of this progress has come from reducing carbon in the electricity sector. Now, buildings are a major target for efforts to further lower the numbers.

One of the bills (SB 1957) working its way through the Legislature calls for rooftop solar panels on new residential and commercial construction. The second bill (SB 1995) would require panels be put on new or renovated state-owned buildings. Both measures include exceptions for buildings where shading or positioning issues prevent solar from being a viable option. Projects would also be able to meet the requirements of the rules by showing they would generate an equivalent amount of power using a different renewable energy system.

Both bills have been reported on favorably by the Legislature’s Joint Committee on Telecommunications, Utilities and Energy. They are now under consideration by the Senate Ways and Means Committee.

The proposals were inspired by a similar law that passed in California last year.

“This is the kind of policy we need to have in place,” said Ben Hellerstein, state director for nonprofit advocacy group Environment Massachusetts. “We need to get to a point where just about every rooftop that can have solar on it in Massachusetts does.”

An additional advantage to installing solar on new construction is cost efficiency, Hellerstein said. The cheapest time to install solar is during the original building process, he said, so it will cost less to put in panels on a new home than it would to retrofit an existing roof.

A solar requirement could also provide an economic boost, said Mark Sylvia, president of the Solar Energy Business Association of New England, an industry advocacy group. The state’s solar industry currently employs about 10,000 people, down from more than 15,000 in 2015, according to numbers from the Solar Foundation.

The decline was widely attributed to delays in the implementation of the state’s latest solar incentive program. While many believe the situation has already turned around, a law requiring solar on new construction would certainly accelerate the industry’s recovery, Sylvia said.

“This absolutely will continue to support growth in the solar market from a jobs perspective,” he said.

Many in the real estate and construction industry, however, oppose the bills. The mandate, they argue, will increase housing prices in a market that is already among the nation’s most expensive. The median price for a single-family home in the state was $385,000 in 2018, an all-time high according to real estate data firm The Warren Group. Only California, Hawaii, and Washington D.C. have median home prices higher than Massachusetts, according to numbers from Zillow.

For builders, the bill’s focus on new homes creates an unfair playing field, said Emerson Clauss III, owner of Allegiance Construction and Development in Northbridge, Massachusetts, and vice president of the Home Builders & Remodelers Association of Massachusetts. Any home built in the past 30 years, he said, is already more energy efficient than the older — often centuries’ old — buildings that make up much of Massachusetts’ housing stock, he said.

Clauss is also unconvinced that the state’s solar workforce is up to the challenge of the huge demand surge these measures could bring, he said. He regularly works with customers whose solar panels simply aren’t working right, a phenomenon he attributes to a lack of well-trained installers.

“How does it gear up? Who’s doing the training? Who’s the watchdog agency?” Clauss asked.

Sylvia, however, believes the workforce is prepared. Because solar jobs dropped so sharply in the past three years, there are thousands of people with industry experience ready and able to jump in to the new jobs the bills would likely create, he said.

For Donovan, the need to move quickly outweighs the concerns some have raised.

“We have to rush to make sure that there are no more buildings built that are going to be using fossil fuels,” she said. “We have to get to that point as quickly as we possibly can.”