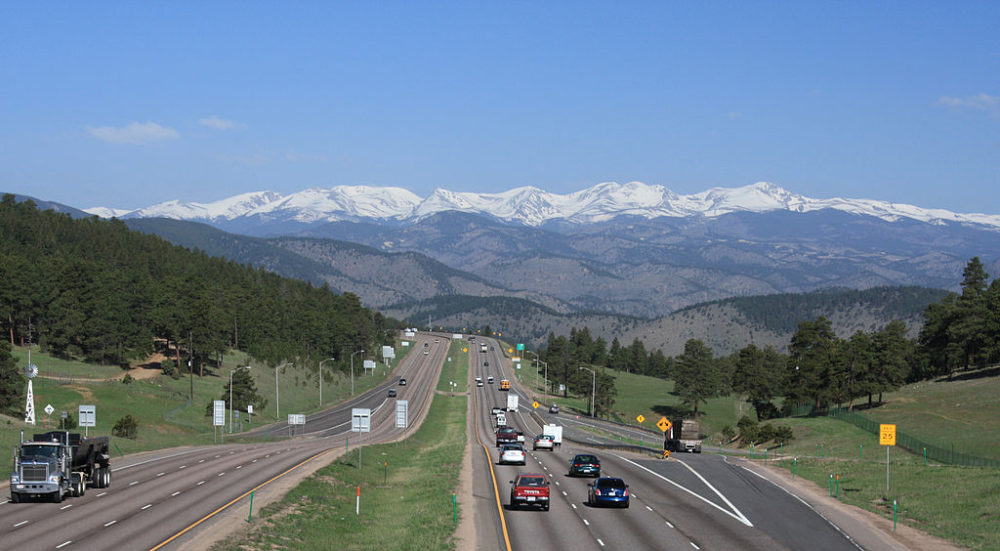 About 20 miles west of downtown Denver, Colorado, the Front Range of the Rocky Mountains towers over Interstate 70.

As the state emerges as a leader in electric transportation, it’s grappling with unique challenges from its geography.

Colorado’s challenges in accelerating electrification of transportation can be understood partly in its extremes. It’s 229 miles from downtown Crested Butte to the gleaming gold dome of the Colorado Capitol in Denver. In theory, a Chevy’s Bolt’s battery life has a range of 238 miles. That’s just enough juice, right?

Climate and geography matter, though. A yearlong study conducted by the Gunnison County Electric Association revealed challenges for a Bolt.

Temperatures still dip to 30 below in the high Rockies, despite milder winters during recent decades. And to get to Denver requires crossing three mountain passes, including the Continental Divide. The study revealed exactly why Colorado needs an improved fast-charging infrastructure.

The state plans 33 fast-charging stations along its two interstate corridors as well as other U.S. and state highways.

“Once those get built out, it’s a very different picture,” said Mike McBride, chief executive of Gunnison County Electric. The co-op serves Crested Butte and the Gunnison River Basin.

Colorado began briskly installing charging stations in the administration of former Gov. John Hickenlooper. Arriving at the State Capitol in January, Gov. Jared Polis took steps to accelerate the pace. That direction along with new laws adopted this year lead some to declare that Colorado will soon emerge as among the nation’s leaders in vehicle electrification.

“After this legislative season, I think Colorado has to be considered a leader,” said Travis Madsen, transportation program manager for the Southwest Energy Efficiency Project. “We have some new work to do to implement the policies, but I expect that the next couple of years will be transformative.”

Colorado last year was fifth in the nation in electric vehicle sales as a percentage of total sales at about 2.6%, according to EVAdoption.com. California led the nation at 7.8%. Madsen expects Colorado’s sales to increase, the result of steps taken by both legislators and direct action ordered by Polis.

Punching the pedal on EVs

Polis has punched the pedal hard to speed the adoption of electric vehicles. In January, in his first executive order as governor, Polis ordered reallocation of the $68.7 million Colorado will get as its share of the Volkswagen emissions settlement. Under Hickenlooper, the state splintered the money, with some going to school buses and garbage trucks fueled by propane or compressed natural gas.

Now, all of Colorado’s VW money will go all to electric transportation: half to transit buses, a third to school buses and medium and heavy-duty trucks, and 15% to light-duty electric vehicle charging stations along highways, such as on Highways 50 and 285, two-lane federal highways used to drive between Gunnison County and Denver.

Polis also directed the Colorado Air Quality Control Commission to review adoption of a zero-emission vehicle standard based on California’s program. A compromise agreement with major auto manufacturers and auto dealers will, if approved by the commission in mid-August, result in auto dealers expanding their offerings of electric vehicles.

Legislators also pushed forward, creating the framework this year for the state’s two investor-owned utilities, Xcel Energy and Black Hills Energy, to begin establishing charging infrastructure. They also created a longer downhill coast for tax credits applied to new electric vehicle purchases. The $5,000 credit had been scheduled to expire in 2020, but will now drop incrementally through 2025.

Group buys, including those in partnerships between utilities and dealerships, have also knocked down prices. Debby King, a resident of metropolitan Denver, owned a hybrid but had no plans to buy an all-electric car. The incentives persuaded her otherwise. State and federal tax credits along with price discounts and rebates offered by Xcel Energy and the auto dealership, Tynan’s Nissan Aurora, ratcheted the price down by $19,500. She ended up paying less than $12,000 for a Nissan Leaf.

“With all the rebates, it was really hard to pass up. I’m not sure that all the infrastructure is quite as robust as I want it to be, but I’m going to find out. But if it’s not, I can always rent a (gas-engine) car,” she said. The Leaf car has a minimum range of 150 miles — not far enough for all of her meetings as a foster-care parent.

A state plan released in January 2018 identified a stretch goal of having 940,000 electric vehicles on the road by 2030. Given Colorado’s aggressive policies, that may be a modest figure. The Colorado Energy Office says the plan will be updated this year.

Transportation has become the fulcrum for Colorado’s greenhouse gas reduction efforts. Legislators adopted sweeping economy-wide goals this year, and Madsen pointed out that if Colorado hopes to attain them it must more rapidly accelerate decarbonization of its transportation sector. “It’s pretty clear where the electric sector is going, and the transportation sector needs a lot more attention,” he said.

For people in Crested Butte, buying most models of electric cars remains a stretch. It’s a town with a full-time population of 1,700 people that swells during ski season and even more so during July and August, its two busiest months.

During winter, driving from there to Denver requires climbing 3,609 feet up Monarch Pass before descending about the same elevation to Poncha Springs. That’s not a problem, as regenerative braking technology that is standard on electric vehicles restores lost energy. What could be a problem is if the traffic gets diverted because of avalanche control work? There’s a more circuitous route over Cochetopa Pass and into the San Luis Valley, but that requires more battery.

Cold temperatures also limit the range of electric vehicles. The study conducted by Gunnison County Electric found that cold weather sapped batteries more than was predicted by Environmental Protection Agency estimated averages. In the temperature band of 1 degree to 32 degrees Fahrenheit, batteries performed at 80% of the EPA estimate. Performance drops dramatically as temperatures dive, 37% of the EPA estimate when the average temperature was 8 degrees below Fahrenheit.

Installation of high-speed charging should reassure motorists. One such station was installed during February at Buena Vista, halfway between Crested Butte and Denver. It can add up to 125 miles of range within 30 minutes, just enough to get into Denver. But McBride points out that the Bolt typically gets about 55% of the nameplate charging rate. The lesson, again, is that electric vehicle owners will be advised to be cautious.

Gunnison County Electric conducted the study to help its members make good choices and has now launched a similar study using a Tesla Model 3. “If potential EV users know what they can expect, they won’t be caught off guard,” McBride said. “They will also be able to choose a vehicle with enough range to meet their needs.”

Bryan Hannegan, chief executive of Holy Cross Energy, another electrical cooperative, said the effects of elevation gains in the Bolt study were not surprising, but the “impacts of air temperature on driving range may be more significant, it seems.”

Holy Cross has been working with its members in the Aspen, Glenwood Springs and Vail areas to deploy two fast-charging stations. One of them, at Eagle, located 130 miles west of Denver, went online this week. The co-op is also offering 100% rebates to members who install the Level 2 chargers at their homes or businesses.

Transit agencies across Colorado are also investing in 40-foot-long buses. Among them is the state’s second-largest transit agency, Roaring Fork Transportation Authority, or RFTA. It uses a fleet of more than 100 buses and 22 vans to serve Aspen and other communities in a 70-mile corridor west to Rifle. In August it will take possession of eight 40-foot-long New Flyer electric buses.

Dan Blankenship, chief executive of RFTA, says the buses will be used first in and around Aspen, where the agency runs 350 trips a day almost around-the-clock. One place the new electric buses won’t go is to the Maroon Bells, the portal to the wilderness area with the calendar-worthy photo ops. RFTA isn’t sure how well the buses will handle the sharp rise in elevation there.

“Every technology is going to present some challenges,” Blankenship said, and often the challenges aren’t clear until the buses are actually deployed. It was that way with natural gas-powered buses but also electric hybrids.

Blankenship expects the climate to pose challenges that a bus operating at sea level might not have. Heating and defrosting will draw down the batteries of the buses, which can carry 60 passengers and their skis during peak times. Bus routes include grades of up to 7%. And, as he adds more electric buses, Blankenship has to think about charging infrastructure.

The Aspen area, he points out, puts a premium on aesthetics. Every little land use must be filtered through that lens.

On the plus side, the electric buses will be far quieter than the diesel or even the hybrid buses, no small factor in a town that prizes environmental quality. Too, the buses will soon have a lower carbon footprint as electrical supplies become less and less drenched with carbon.

But what about in a mountain town? Is it time to buy an electric vehicle if you’re in Telluride, Crested Butte or Steamboat Springs?

“There’s no way I would buy a new gas-fueled car right now,” Madsen said. His declaration is driven by a passionate belief in the need to transition energy sources. But he’s also convinced that the cost savings alone justify electric vehicles. “It seems like a win-win to me: save money, prevent pollution, and protect health.”

But he would be cautious exploring the market. Given all the new electric vehicles expected to be available in the next few years, he’d want to lease an electric vehicle, get familiar with how it works, and then be prepared to buy. Electric vehicles are expected to achieve prime parity with internal combustion engines by a round 2025, according to Bloomberg New Energy Finance.

Some people, even in Crested Butte, already have purchased electric vehicles. One resident regularly drives between Crested Butte and California. Of course, he has a Tesla, with a 300-mile range and Tesla’s carefully calibrated charging infrastructure along the way.

As for those who want pickups, they’re coming, too. One option: a Rivian pickup truck, which was displayed at the X Games in Aspen last January as well as an outdoor retailer show this summer in Denver. The developer, an MIT graduate, believes he has developed a model that can go 400 miles without recharging. It will be pricey, though. Even the base model, which can go 230 miles on a charge — same as a Bolt — will be $69,000 before state and federal tax credits.