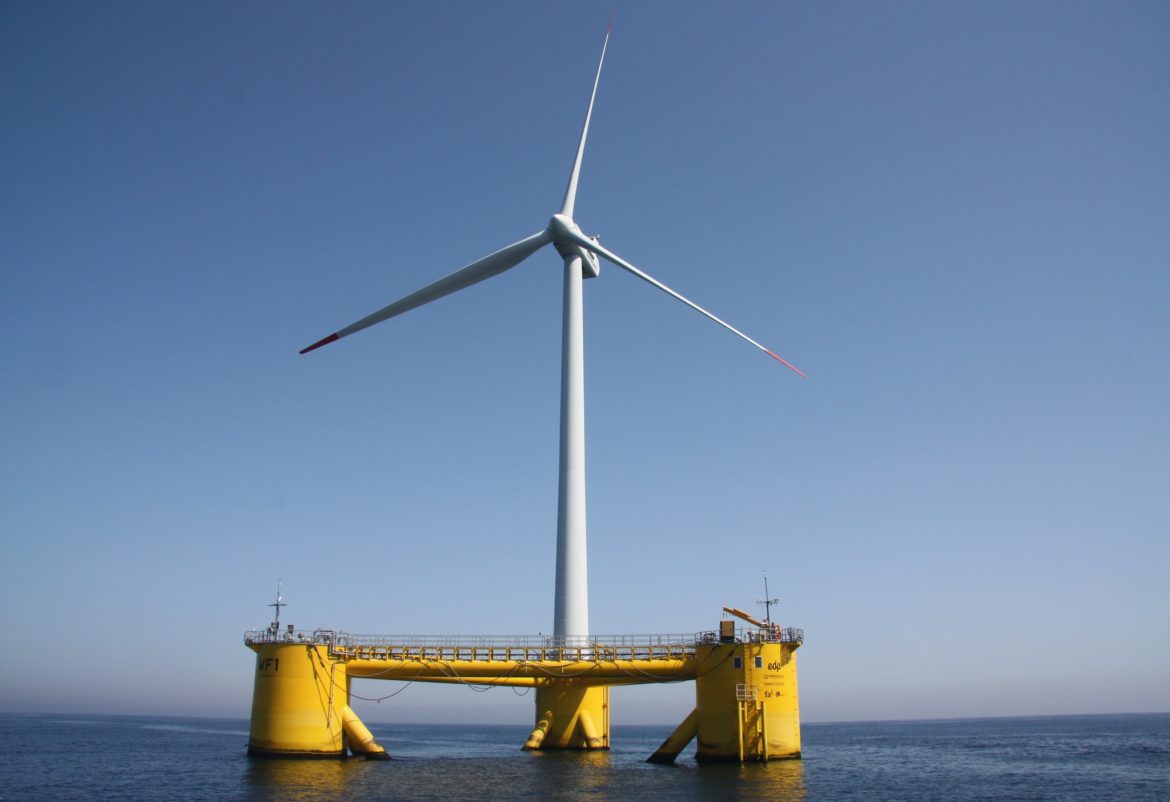 A wind turbine floats on its foundation off the shore of Portugal.

Adding offshore wind power to California’s rapid decarbonization effort could save the state and its power consumers billions of dollars, according to a new study commissioned by a company that hopes to build wind turbines off the coast.

California hasn’t yet calculated offshore wind’s potential to help it reach zero net carbon emissions, and the state still falls short of producing the amount of green power it will need to hit long-term policy goals, Sanderson Hull, lead author of the study at Energy and Environmental Economics Inc., said in a statement Monday.

“Offshore wind is a promising resource that has not yet been fully investigated as a component of California’s optimal pathways for meeting its clean energy goals,” Hull said.

Castle Wind LLC commissioned the report, which projected savings of up to $2 billion from offshore wind for electricity customers in the state. The firm is a joint venture between EnBW North America and Trident Winds Inc., and it’s behind a proposal to build a 100-turbine offshore wind project on floating platforms moored in the deep water off the central coast.

California has committed to hitting 100% zero-emission energy sources by 2045 and cutting 80% of its greenhouse gas emissions by 2050 compared with 1990 levels.

Hitting those targets will require a major renewable build-out and integration of renewable energy resources into the grid, experts say, and California is still in the early stages for weighing offshore wind’s role.

The West Coast also has a federal regulatory process to go through before offshore wind can begin to match the level of planned investment seen along the Eastern Seaboard, said Walt Musial, principal engineer and manager for offshore wind at the National Renewable Energy Laboratory.

“That doesn’t mean that it’s not going to happen; it just means that it is behind,” he said.

The Energy and Environmental Economics report says offshore wind could help hold down costs for ratepayers as California pursues its emissions goals. Its primary findings:

Offshore wind is a nascent industry in the United States, with just one pilot project churning out wind power in waters off Rhode Island. But policy commitments from states on the East Coast are driving an expected offshore wind boom. From Massachusetts to Maryland, states have pledged to add a combined 20 gigawatts of offshore power to the grid.

Not so on the West Coast.

California is one of the largest energy consumers in the country and has one of the most ambitious renewable energy goals. But it has different technology demands for offshore that are less proven: floating turbines.

Floating wind may be the most viable option in California, where commercial fishing, merchant activity and U.S. military operations may be incompatible with secured offshore wind farms, according to federal energy authorities, developers and energy analysts (Energywire, Feb. 27).

Multiple pilot projects for floating offshore projects are folding out globally to prove the viability of the technology, said Musial of NREL, who has noted previously that California will likely need floating wind as part of its decarbonization strategy.

The Bureau of Ocean Energy Management intends to hold an offshore wind lease sale next year. It put out a call to industry for three off-coast areas last year: one off Humboldt County in Northern California and two in the Morro Bay area on the central coast. The bureau received 14 nominations — indications of industry interest to develop — according to a lease strategy update the agency published in June.

“It is now up to the elected officials, policy makers, other key stakeholders, and the State of California to make this happen,” Weinstein said. “The offshore wind industry is ready, willing and able to invest its resources to bring offshore wind to California.”