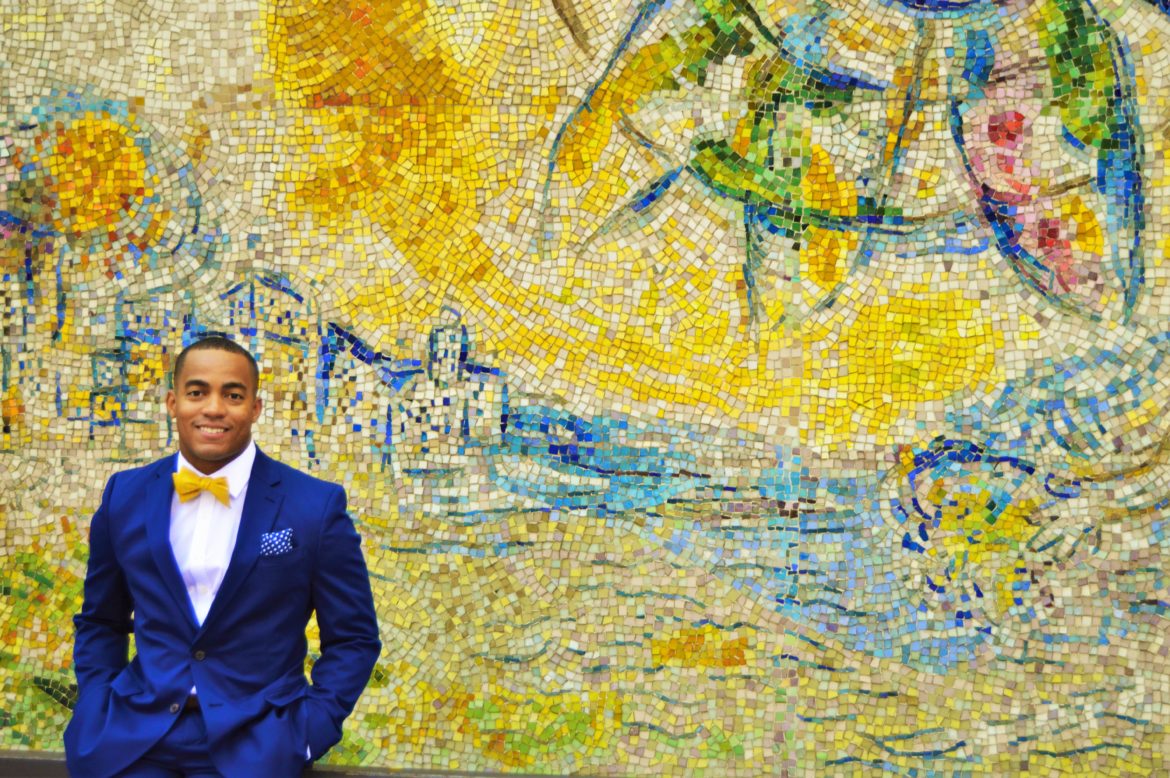 Robert “A.J.” Patton founded 548 Capital LLC, which he named for the unit number in the projects where he grew up.

“We want to showcase that you can invest in a community without gentrifying,” the company’s founder said.

Robert “A.J.” Patton and Erica Johnson were childhood friends growing up in public housing in Terre Haute, Indiana. Patton now lives in the upscale Chicago neighborhood that was once home to the Cabrini-Green public housing projects, and Johnson lives in Harlem, which in recent years has changed from a low-income African American neighborhood to a hip, expensive enclave. So they’ve both experienced living in low-income communities, and in gentrified neighborhoods where longtime residents were displaced.

Now the two are launching a company that they hope will provide quality housing to lower-income residents in Chicago, and avoid gentrification, by harnessing the potential of energy efficiency and solar. At the same time, they plan to provide jobs for low-income and minority residents who are disproportionately left out of the clean energy economy.

In 2016, Patton quit his job as vice president of domestic investments for Equities First LLC, an investment fund, to found 548 Capital LLC, named for the unit number in the projects where he grew up. Johnson owns a construction risk management firm in New York that works with New York City’s public housing authority; she plans to ultimately move to Chicago to concentrate on 548 full time.

Patton said they are in the process of buying several multi-unit residential buildings, which they will own and rent to tenants, after doing energy efficiency retrofits, installing rooftop solar and generally improving the building quality. They want to be sure that their work does not contribute to displacement, so they will keep rents low and prioritize the tenants who were in the building when they purchased it, Patton said.

The young entrepreneurs plan to keep the rents affordable and still make a profit thanks largely to energy efficiency and solar. In buildings where 548 includes the utilities in monthly rental bills, they will pass savings on to residents. And in some buildings, residents might pay their own utility bills, in which case the efficiency upgrades would lower their overall costs. Solar and energy efficiency would also help lower the cost of utilities for buildings’ common areas, which landlords pay.

“The uniqueness is adding on the solar and commitment to energy efficiency,” said Patton, who studied finance and served as student government president at Indiana State University before working for a decade in investment banking.

“We want to showcase that you can invest in a community without gentrifying. You buy the building, rehab it, lease it out to the exact same people who were there, providing high-quality living. Energy costs are a big cost to the building owner. If I can lower that by a third, that’s a big number. That could subsidize your capital improvements on the front end, and you can really do something special for those folks in terms of the living experience.”

Affordable housing has long been seen as a lucrative market for some property ownership companies in Chicago, with holdings concentrated on the city’s struggling South and West sides where buying a home is often not an option for tenants, and many have rent subsidized by Section 8 vouchers from the federal government.

The sector is known to attract bad actors, including absentee landlords who let buildings deteriorate while collecting rent and those that demand exorbitant security deposits or other fees from residents who are unlikely to object since they have few other options.

Patton said 548 will purchase buildings in marginalized, mostly minority neighborhoods on the South and West sides that have been deemed Opportunity Zones under the federal program meant to stimulate investment. That means if someone invests capital gains in projects in the zone, a portion of federal taxes is deferred or forgiven.

Patton said 548 has 100 residential units under contract, and they plan to add 100 units a year for the next three years, ultimately owning about 2,500 units. Patton said that they are seeking more investors in Chicago and New York; he declined to provide details or documentation, citing confidentiality. He said they’ve had encouraging feedback, though investment conversations can be “colorful.”

“Historically those folks aren’t used to seeing someone like Erica and I saying, ‘We’re here to ask for $10 million,’” Patton said. “I don’t know if they’ve ever given a woman or diverse firms $10 million, not to mention we’re going to take this money and put solar panels in communities they’d never drive through.”

Patton got interested in clean energy when he worked at Equities First and a friend who works for a Canadian solar company sought financing, he said. The project wasn’t a fit for his employer, but Patton began reading up on solar and energy efficiency and taking a personal interest.

When he decided to launch his own company, he recruited several partners including Johnson and Charles Cole, who had moved to Chicago after working in affordable housing development in Atlanta. For advice and mentorship, he turned to Baltimore solar developer Rob Wallace, who co-founded the organization Power52 along with NFL star Ray Lewis and real estate broker Cherie Brooks to provide solar job training in the wake of the riots in Baltimore in 2015.

While the 548 team’s expertise lies more in housing and finance than energy, Patton and Johnson said they are quickly learning about the relevant technology, policies and incentives.

“The recognition that energy efficiency and energy generation through solar power can really lower costs for residents, and add value to the real estate investment, I don’t think that’s been truly appreciated in the industry so far,” Cole said.

Illinois’ 2017 Future Energy Jobs Act includes provisions incentivizing solar in low-income neighborhoods and creates job training programs meant especially to train a more diverse clean energy workforce. While the Solar for All program created by FEJA is relatively small-scale, the proposed Clean Energy Jobs Act would increase incentives making solar and solar jobs accessible to more low-income and diverse populations. Patton said they are not actively seeking such state incentives now but will likely do so in the future.

548’s projects could also seemingly benefit from the recent launch of Chicago’s property assessed clean energy program, which helps property owners get upfront capital for solar, energy efficiency and resiliency investments, paying the cost back through property tax payments spread out over time.

Krista Egger is senior director of initiatives at Enterprise Community Partners, the national organization that drafts criteria and awards certifications for green development practices in affordable housing. The organization is currently seeking comment on its proposed updated standards. While Egger is not familiar with 548, she said energy efficiency and solar investments are a proven way to reduce ownership costs and ensure affordability for multi-tenant rental buildings.

“Some people feel that green affordable housing is an oxymoron, because you have to build in a very cost-effective way to be maintained by the small rents you get back,” she said. “But really what we’ve seen is that it is possible — we’ve proven it with over 100,000 units around the country — that it is possible to do green affordable housing in a cost-effective way. And it’s most important for people with limited incomes to live in a building that has limited costs for energy.”

Colleen Smith, legislative director for the Illinois Environmental Council, said clean energy advocates are excited about 548’s potential and “highlighting what 548 is looking to create as what a clean energy future could look like and what’s possible with the passage of FEJA.”

Remembering his childhood in public housing, Patton said he thinks many low-income people have little interest in clean energy when they are focused on just making ends meet. But he hopes projects like 548 could also raise awareness about the shifting energy economy.

Read more: In Detroit, a legacy of inequality creates obstacles to clean energy

“On the ground, I don’t know if folks necessarily care where the energy comes from as long as they see the impact on their bills,” Patton said. “But we care, and as we engage more and more they understand what’s going on [with solar panels] on top of their building.”

Patton said 548 is committed to hiring local and diverse contractors for rehab and energy work, including those trained under Illinois Solar for All. In the future, he dreams 548 would run its own solar and energy efficiency training program.

“You have to give people the ability to participate in the ascension of their own neighborhood,” Patton said. “Why do I need folks from Wilmette [a wealthy suburb] to rebuild Englewood,” on the South Side. Smaller, minority-owned businesses “are being left out of the larger contracting competitions, the folks in Englewood aren’t getting access to mega-projects. How can I grow their capacity to become a big dog, by giving them some smaller bites at the apple they can then grow into something.”

As an African American woman in the construction industry, Johnson has plenty of experience overcoming preconceptions and discrimination, Patton noted.

Johnson, who studied environmental science in college, said construction risk management means she works with everyone from “the person who gets hurt while banging nails” to architects, inspectors and engineers — “I literally work with every single trade.”

She and Patton hope their experiences can help inspire and pave the way for others entering the clean energy workforce, while also making sure communities like the one they grew up in can reap the benefits of clean energy.

“We’re young, gifted and black,” said Johnson, quoting a Nina Simone song. “And we are really trying to push it out there so we are helping the community.”