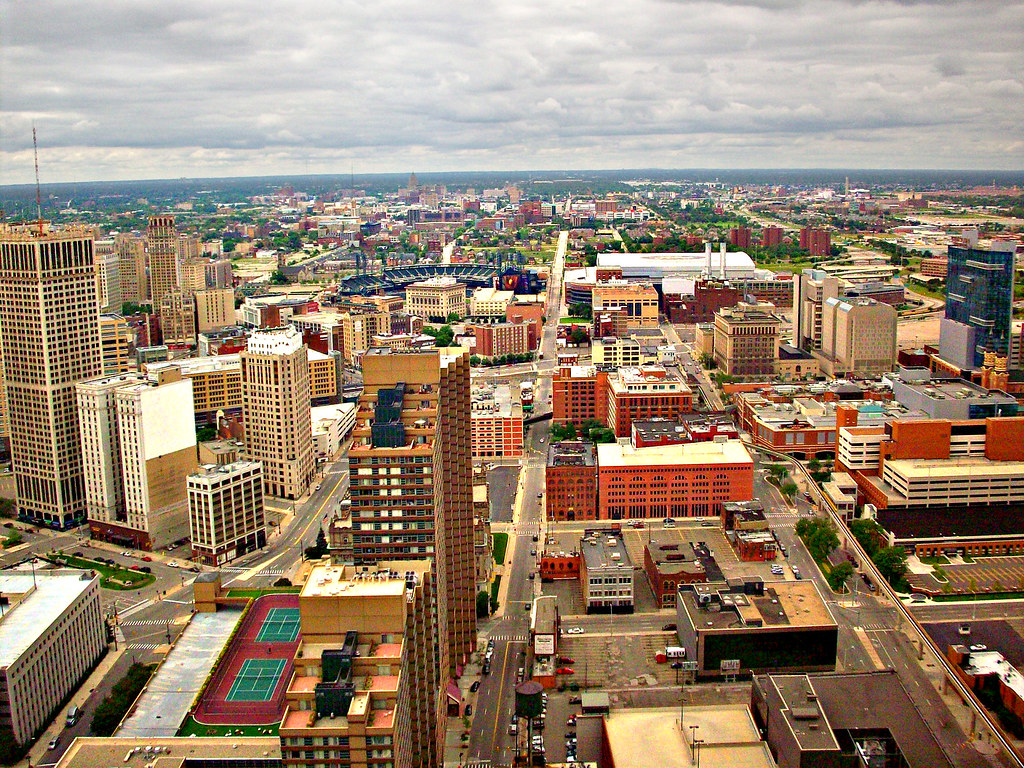 Both cities see buildings as a key element to meeting ambitious climate goals in the coming decades. And both are hoping that voluntary programs and a lead-by-example approach will be enough to spur broad change.

That may be wishful thinking, according to efficiency advocates, who say the cities most successful at cutting building emissions have been so because of mandatory policy changes such as benchmarking or building code changes.

“These are hard decisions,” said Lauren Ross, local policy director for the American Council for an Energy Efficient Economy. “Setting mandates or policies that require energy savings is really going to be needed.”

For now, though, sustainability leaders in Detroit and Grand Rapids see easier first steps focused on improving government buildings and making the case to private building owners with information and incentives.

Detroit’s City Council passed the city’s first greenhouse gas ordinance in July, calling for a 35% reduction in municipal emissions by 2024 and to be net-zero emissions by 2050. The citywide goal calls for a 30% reduction by 2025.

In 2012, buildings and facilities comprised 63% of citywide greenhouse gas emissions. Most come from industrial, institutional and commercial buildings and are concentrated in midtown, downtown and southwest Detroit.

City-owned buildings are the immediate concern, though. Of more than 150 city-owned facilities, 88 track and report their energy usage. The city estimates it could save $3 million a year through energy efficiency at these sites.

Public works officials also plan to set standards for lighting, heating and cooling, and water usage in municipal buildings, while also launching a utility bill monitoring system to “flag unexpected usage and cost information for further investigation,” according to the sustainability plan.

For privately owned properties, Howrani Heeres said requiring building owners to report energy usage through benchmarking has been an effective policy in other cities. Detroit doesn’t have the ability to manage a program of that scale, but it plans to work with properties enrolled in its 2030 district to do so, he said. Building owners in the district voluntarily commit to reducing energy usage.

Howrani Heeres is optimistic that the pitch to the private sector will be strong enough to move the needle without mandates. “In a lot of ways the private sector is a little more on top of it than the public sector,” he said. “They see the immediate return on investment of doing things.”

Grand Rapids was the first city in the state to adopt a 100% renewable energy goal for city operations, aiming to do so by 2025. The city’s latest four-year strategic plan, started on July 1, includes emission-reduction targets with an early focus on buildings.

“We’re trying to create and support programs and policies that would help reduce carbon emissions across the community,” said Alison Waske Sutter, the city’s sustainability and performance management officer. The emission goals are broken up between city operations and community-wide.

Like Detroit, Grand Rapids also has a 2030 district in which property owners voluntarily participate to benchmark energy usage with a net-zero carbon emission goal by 2050. Waske Sutter said it will be key for the city to “lead by example” on efficiency projects to help push other property owners.

Citywide, efficiency mandates may be a tough sell. At a recent meeting of the city’s Energy Advisory Committee, Waske Sutter raised the prospect of a benchmarking ordinance similar to cities like Chicago. Committee members said it could be a difficult, years-long undertaking for a relatively conservative and business-friendly city.

Dan Schoonmaker, executive director of the West Michigan Sustainable Business Forum, said incentives are already in place to help push the private sector on efficiency, such as property assessed clean energy financing. “To get building owners to reduce their energy usage, they just need capital and a return on investment,” he said.

‘Business as usual’ not enough

Those financing and incentive programs are certain to convince some building owners to invest in efficiency upgrades, but whether it does enough to help the cities meet their adopted climate goals is another question.

Ross, of the American Council for an Energy Efficient Economy, is doubtful if those programs are not eventually backed up with mandatory policies. “Business as usual is not going to get most cities to their goals,” Ross said.

In July, ACEEE released a scorecard grading 75 U.S. cities on energy efficiency. Minneapolis is the only Midwestern state to crack the top 10, while Grand Rapids and Detroit ranked 38th and 63rd, respectively.

Leading cities take varying policy approaches to cutting energy use but typically rely on a combination of stronger building codes and mandatory benchmarking and reporting requirements with financing incentives. Some cities also require low-performing buildings to undergo retrofits and for building owners to disclose energy performance to occupants.

While efficiency mandates can initially be a tough sell to private property owners, Ross said varying interests need to be brought to the table to learn the long-term financial benefits of energy efficiency.

“Efficiency is good for businesses,” Ross said. “I imagine talk of mandates in cities doesn’t come with a warm reception, but it doesn’t have to be this way. It’s about creating and building awareness of the benefits of efficiency, which are taken for granted or just overlooked sometimes.”