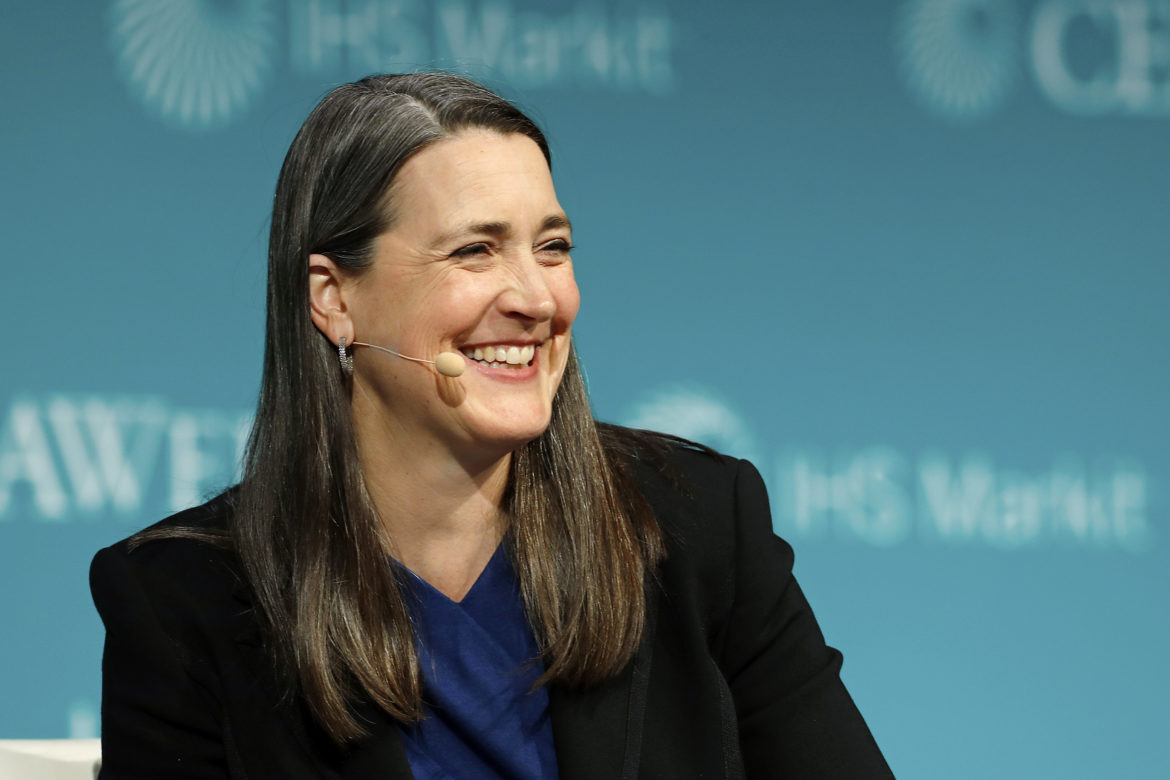 Patti Poppe, chairman and chief executive officer of speaks at an event in Houston in March 2019.

Consumers Energy CEO Patti Poppe is on tour across Michigan’s Lower Peninsula touting the benefits of energy efficiency. Customer participation is so vital in these programs, Poppe told a crowd in Grand Rapids Wednesday, that it will keep the utility from building three new natural gas plants by 2040.

Over the next few months, utility officials plan to stress this point to customers and businesses as they explain the company’s new Clean Energy Plan that calls for 90% clean energy by 2040. The plan was approved in June by the Michigan Public Service Commission. It has the support of several leading environmental groups largely because it calls for no new natural gas plants as Consumers retires its remaining five coal units by 2040.

While the plan calls for 6,000 megawatts of new solar by 2040, customer efficiency programs make up 22% of the portfolio in that time. If Consumers can’t hit this target to cut energy waste, it will be forced to build up to three new gas plants to maintain reliability, Poppe explained.

“We can’t deliver this clean energy plan without the people of Michigan actually fundamentally changing and eliminating the energy waste that we take for granted today,” Poppe said.

Consumers has an average 4,200-megawatt demand across its electric system in the Lower Peninsula. On a few peak days during the year, it reaches roughly 7,000 MW. The company’s generation capacity is 8,300 MW.

As the company retires coal units and ends its contract for roughly 800 MW of power from the Palisades nuclear plant in southwestern Michigan in 2022, the capacity will be replaced mostly by solar and energy efficiency to scale back its peak load. Poppe said Consumers has already cut 800 MW of demand since 2009 through efficiency programs, meaning the Palisades plant is effectively backfilled by energy efficiency.

The growing use of smart grid technology, electric vehicle charging and demand response programs allows the company to be “much more sophisticated” in how it reduces demand, Poppe said. This is where customer education and participation comes in.

“If people don’t sign up for these programs and reduce their energy waste, we are in a position where we’re going to have to build a plant,” Poppe said in an interview with the Energy News Network. “We’re betting on the people of Michigan.”

Consumers’ long-term plan calls for doubling its rate of efficiency by 2030 to 2% of its annual load by 2030. Legislation passed in 2016 creates incentives for utilities if they go beyond 1%, which was set in Michigan’s first renewable energy standard in 2008. The 2016 legislation also eliminated a 2% efficiency spending cap.

Creating incentives and eliminating the spending cap helped Michigan “move in one decade from a state with zero utility energy efficiency programs to one of the top states in the nation,” Martin Kushler, a senior fellow with the American Council for an Energy-Efficient Economy, wrote last year.

“One very important element in the Consumers Energy story has been the emergence of a strong leadership team that seems truly interested in moving toward clean energy resources,” Kushler added.

Gas in the forecast

“Given that we have the opportunity of a generation to determine how we’ll replace these big central power plants, we’ll replace them with modular renewables because it’s smarter,” Poppe said.

Clean energy advocates hold up Consumers’ integrated resource plan as a model for other utilities in Michigan to follow. Most recently it has drawn comparisons to DTE Energy’s, which was filed in March. Clean energy groups criticize DTE’s plan for favoring company-owned generation, failing to build out significant amounts of solar, and only boosting energy efficiency targets to 1.75% by 2040. Analysts have said recently that DTE’s modeling is broadly flawed to discount the value of clean energy, ultimately delaying any significant climate action until after 2030.

“From start to finish, DTE has done whatever they wanted,” said Ariana Gonzalez, senior energy policy analyst with the Natural Resources Defense Council.

Yet DTE officials publicly maintain a commitment to renewables and have a similar carbon-reduction target as Consumers: more than 80% by 2040. DTE’s plan provides a “good foundation for discussion to achieve the best possible outcome for affordability, reliability and the environment,” said DTE spokesperson Randi Berris.

While Poppe said Consumers’ final plan that was approved by regulators isn’t much different than what was originally proposed, she said discussions with interest groups early and “actually letting them change our plan” helped steer what ended up in the final product.

“We got input from people, and we learned things,” Poppe said. “We changed the plan as a result of peoples’ input.”