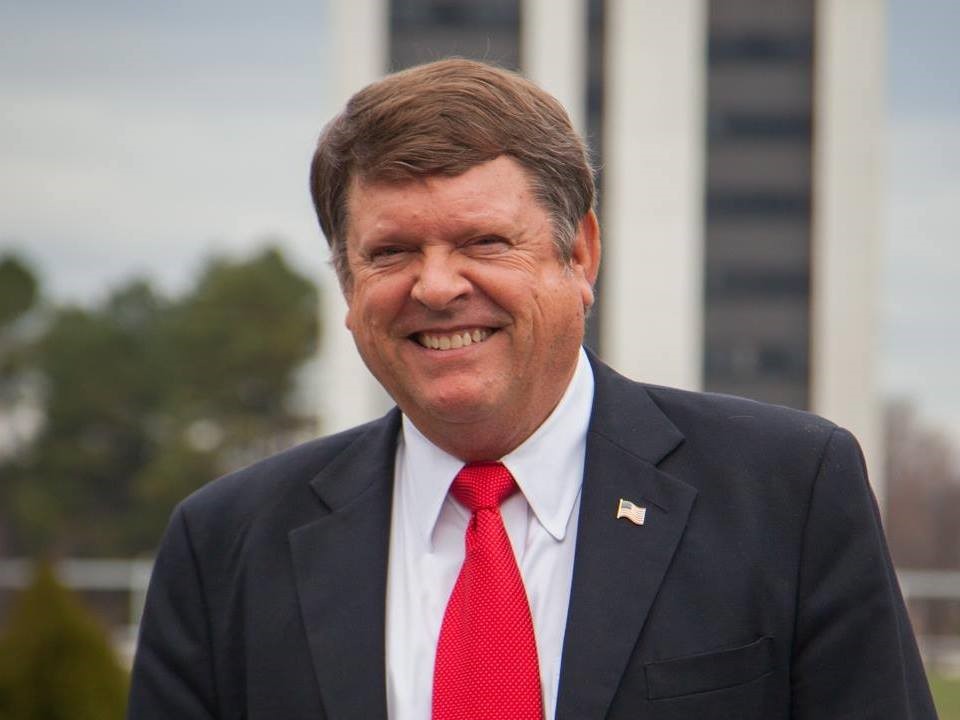 State Rep. Larry Strickland is now tasked along with 10 other conferees to produce a compromise on the controversial bill.

A little-known name in North Carolina energy policy has emerged as a major figure in the fight against a controversial ratemaking bill backed by Duke Energy.

Rep. Larry Strickland, a Republican from Johnston County, bucked his party’s leaders late last month when he moved to convert a key section of Senate Bill 559 into a wide-ranging study on rate reform. His amendment passed 63-51, derailing the utility’s top legislative priority.

Now, the Senate has voted against the House changes, and Strickland has been named to a conference committee to produce a compromise — pitting the sophomore lawmaker against powerful politicians from both parties.

If past votes are any indication, Strickland is sorely outnumbered: Only one other conferee on the 11-member panel has backed the study. Still, the mild-mannered legislator says he’ll stay strong.

“If it comes back [with the study] gutted out,” he said, “I can’t support it at this time.”

Like many in the Republican-controlled General Assembly, the former county school board chairman and state government worker identifies as a conservative. But he doesn’t view the most talked-about energy bill of the session through that lens.

“It’s folks on both sides of the aisle that want what’s best for the taxpayer, the citizen, the ratepayer of North Carolina,” Strickland said, “and that’s my agenda.”

‘A lot of public outcry’ over Senate Bill 559

Strickland said he doesn’t believe ratepayers have enough control over their rising energy bills, which he noticed as a boy growing up on a tobacco farm he now owns about 40 miles from Raleigh.

“It was always a big unknown what the amounts were going to be,” said the lawmaker, now in his mid-60s. “That’s the case even today.”

Duke, whose gas and electric service area covers most of the state, points to its historically low rates compared to other parts of the country, and says recent hikes are justified to cover costs such as cleaning up its coal ash dumps and repairing infrastructure after heavy storms.

A 10-year, $13 billion grid improvement plan unveiled two years ago was viewed as part of Duke’s solution to this quandary. But regulators rejected the company’s bid to pay for the plan as a separate rider on electric bills, in large part because the plan’s costs were forward-looking.

With this backdrop, Duke was widely expected to put forward legislation this year that would open up new avenues for the company to recoup expenses. Backed by Senate Democratic Leader Dan Blue and most Republican legislative leaders, S 559 does just that.

Section 1 would permit bonds to be backed by ratepayers to cover the bill for storm-related repairs, estimated at $571 million. This part has drawn almost no opposition, though some clean energy advocates have suggested expanding it to include early retirement of coal plants.

Section 2 would allow multiyear, annual rate increases for forward-looking costs like the grid improvement plan, which, if fully implemented, could raise residential rates upwards of 50%. And it would permit Duke to profit within a range rather than at a fixed percentage, a concept called a “banded return on equity.”

The second section has drawn an array of opponents, who say multi-year rates should only be contemplated along with other changes — such as decoupling and performance-based ratemaking — that would benefit customers and clean energy. Pointing to Virginia — where a banded return on equity policy allowed Dominion Energy to earn $277 million in excess profits last year alone — they say the company could collect hundreds of millions of extra dollars from North Carolina ratepayers.

Despite these criticisms, S 559 cleared the Senate on a bipartisan vote in May and fairly quickly passed three House committees. But it stalled in the full House, where most Democrats and enough Republicans appeared to align with clean energy groups, consumer groups, and a host of large-energy users in the state against the measure. The bill was scheduled for a floor vote in early July but sent back to committee until late last month.

That’s why Strickland thought his amendment could succeed.

“I didn’t see a lot of folks wanting this bill besides Duke Energy,” he said. “There was a lot of public outcry, whether it was from the commercial part, or the industrial sector, or residential customers. They felt like they weren’t being heard.”

The concept of Strickland’s amendment is simple: Leave Section 1 untouched and transform Section 2 into a study that would examine an array of ratemaking reforms. The analysis would be completed by March of next year, in time for lawmakers to enact any recommended changes in their 2020 session.

Strickland stresses the study would involve 12 stakeholders including ratepayers and clean energy experts like those from the North Carolina Clean Energy Technology Center. “My intent is to open the discussion up for clean energy folks,” he said.

When S 559 was rescheduled for a floor vote, Strickland said he had plenty of encouragement from both sides of the aisle to offer his proposal, which he had made public the first time the bill was calendared. “I was more convinced than ever that when I put the amendment back up, it was the right thing to try to do,” he said.

Rep. John Szoka of Fayetteville, chair of a key House energy committee and frequent champion of clean energy legislation, weighed in heavily for the change on the House floor.

“The old model of compensating the utilities for building more and more infrastructure just doesn’t work. I get it,” Szoka said. But S 559 offered just one solution out of many that should be examined, he said. “Section 2 is utility-centered, not ratepayer-centered.”

Rep. David Lewis, chair of the powerful rules committee and sponsor of the House companion to S 559, pushed back sharply, emphasizing that the bill only granted the state’s utilities commission new authority. “Why would we study something,” Lewis asked Strickland, “that is merely giving permissive authority to the experts?”

The junior lawmaker didn’t flinch. “These 12 different folks will help formulate an opinion about policy for the future of North Carolina that will be embraced by citizens,” he replied.

In the end, Lewis and House Speaker Tim Moore voted no along with most other House Republican leaders. But 16 Republicans and all but six Democrats voted yes, securing the amendment’s passage to the relief of bill opponents.

“S 559, as amended, opens the door to truly modernizing our outdated utility model by requiring the Utilities Commission to study a variety of ratemaking tools instead of just the ones that benefit Duke Energy,” Molly Diggins, state director of the North Carolina Sierra Club, said in a statement.

‘They were hearing the same thing I was hearing’

Strickland’s Johnston County has its fair share of solar developments, many of them on leased farmland. That suits him fine, he says, especially after the state repealed investment tax credits for the industry. “I am a supporter of solar,” Strickland said. “It is an alternative energy source that we need to have in North Carolina.”

A fraction of a percent of farmland has been converted to solar farms, according to the North Carolina Sustainable Energy Association, and Strickland points out that unlike with other forms of development, that land could be easily returned to agriculture. “I’d much rather have that than losing farmland to subdivisions,” he said. “I’ll never get that back.”

Mark Fleming, the president and CEO of the advocacy group Conservatives for Clean Energy, said Strickland has attended several of the group’s events in recent years. “He has always expressed an interest in clean energy issues and the need for market reforms,” he said.

In other ways, Strickland is an unlikely ally for clean energy causes. He’s sympathetic to concerns wind energy might interfere with military flight training in the state. He backs the Atlantic Coast Pipeline slated to run through his county, which would transport fossil gas from fracking wells in the Marcellus Shale; he believes it will spark new industry in his district. “Duke Energy is a partner in that,” he said. “I appreciate that side of what they’re trying to do.”

But Strickland also seeks guidance on energy policy from peers like Szoka, who he had hoped would be appointed to the conference committee. “He’s the main spokesman for a lot of the energy issues our chamber is facing,” Strickland said.

Szoka is not on the committee, and the panel looks poised to override Strickland and strip his amendment. But in that condition, S 559 appears a long way from becoming law. Even if it could narrowly pass the House, another 10 lawmakers would have to flip their votes to override a likely veto from Gov. Roy Cooper, a Democrat.

Still, Duke assures investors it can get the measure passed, so the bill’s many opponents aren’t letting up either. Constituents continue to flood lawmakers with emails and phone calls, and according to Strickland’s talks with his colleagues before the House floor vote, the message is getting through.

“They were hearing the same thing I was hearing,” he said. “‘Slow down, get more input from the stakeholders, and convert it into a study.’”