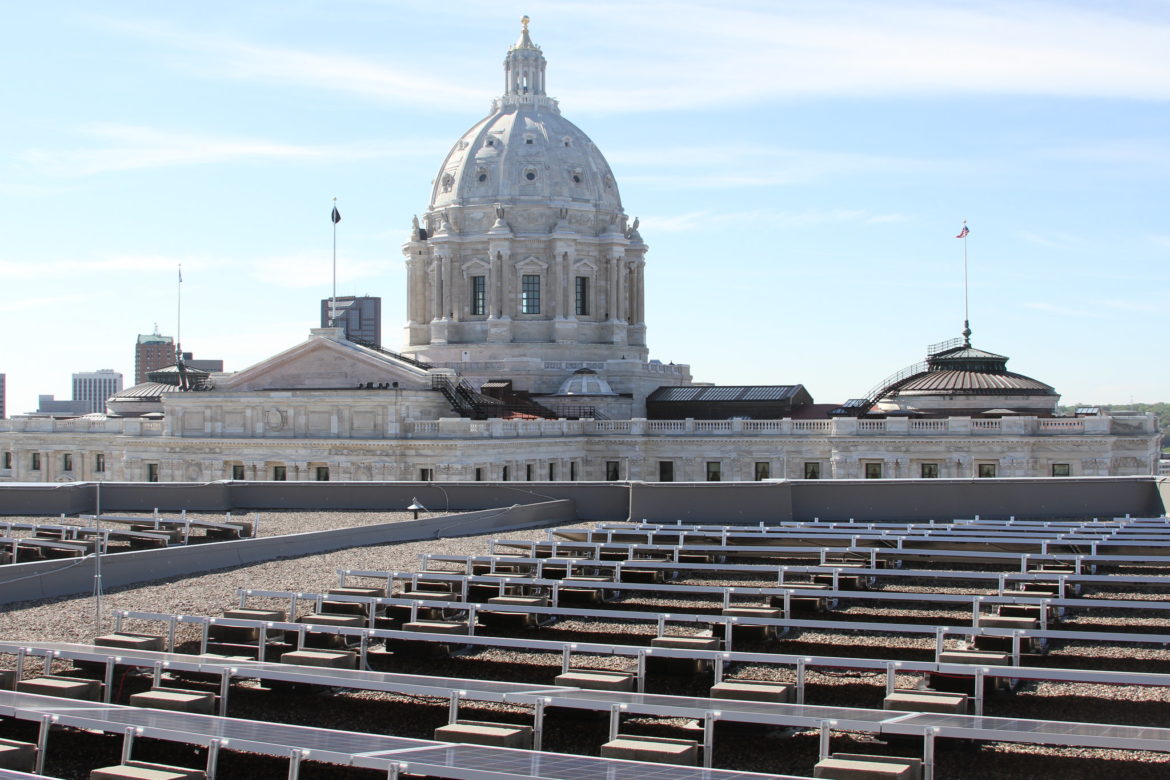 Solar panels on the rooftop of the Minnesota Senate building, overlooking the Statehouse in St. Paul.

After falling for a few years, the rate paid to community solar projects is projected to surge in 2020 if changes aren’t made.

Editor’s note: An earlier version of this story contained a quote from a source who was speaking on background only. It was published due to a miscommunication and has since been removed.

Minnesota’s largest utility wants to change how the state calculates its trailblazing “value of solar” rate as it faces a potential spike in payments to community solar operators.

Since 2017, Xcel Energy has paid community solar projects based on a value of solar rate, a number meant to more accurately reflect solar’s costs and benefits to the grid than retail or wholesale rates.

The figure is updated annually using a state-approved formula. It fell slightly in each of the last two years to about 11 cents per kilowatt-hour, prompting some to question the future of Minnesota’s nation-leading community solar program.

Now, though, Xcel says its value of solar rate is on track to more than double to about 25 cents per kWh for projects coming online in 2020 — a result that is “unreasonable, unrepresentative, and clearly falls outside of the public interest,” according to the utility.

The company is asking state regulators for changes to the formula that would moderate the price swing, something solar advocates don’t oppose outright but have disagreements on the details.

The stakes extend beyond Xcel’s territory, with at least half a dozen other states looking to implement value of solar rates and likely tracking the outcomes in Minnesota.

“It’s really important we get this right, because we could be a model for the country,” said Gabriel Chan, an assistant professor at the University of Minnesota’s Humphrey School of Public Affairs.

The Public Utilities Commission has invited stakeholders to comment and suggest potential changes to the methodology. Commenters include the Minnesota Solar Energy Industries Association, the state Department of Commerce, IPS Solar and Fresh Energy (publisher of the Energy News Network).

“It’s just a really, really hard number to calculate,” said Chan, who has studied the value of solar and submitted briefs on it to the utilities commission. “There are a lot of technical details you have to get into.”

The projected spike in next year’s rate stems from one of the eight variables in the state’s formula, a factor known as avoided distribution capacity costs. It’s a figure meant to capture the cost savings from solar projects postponing the need for new substations or upgraded power lines.

The jump relates to a change in peak demand that affects the projected avoided distribution capacity costs. The peak changes “a lot from year to year,” he said, and one big peak likely caused the increase. Chan said he was surprised the avoided distribution costs could increase so dramatically.

The commission has previously made minor adjustments to the value of solar rate, including giving community solar project operators a bonus incentive for recruiting residential customers.

David Shaffer, executive director of the Minnesota Solar Energy Industries Association, said he’s heard from a few members who said the higher rate would be great for business, but “then I thought, ‘no way is the commission going to approve this.’”

A 2- to 3-cent increase would have been preferable and more acceptable to regulators and the utility, he said. Shaffer worries changes to the formula could hurt future development.

Leaving the proposed rate spike in place could do damage, as well. Xcel has encouraged the Legislature to curtail or end the community solar program, and a huge increase in rates may bolster its cause.

In a prepared statement, Xcel said changing the avoided distribution cost calculation would be to “ensure that we are able to continue to keep customers’ energy costs affordable while we work to achieve our vision of 100 percent carbon-free energy by 2050.”

An average residential customer pays $39 annually to support the community solar program yet only 2% of Minnesota’s energy comes from the program, Xcel said.

Fresh Energy senior policy associate Isabel Ricker said avoided distribution costs have been an “erratic” measure for some time and that a “mathematical quirk” led to the higher calculation. A more stable value that “had a positive value most years” would be preferable, she said.

Chan said he would like to see changes to the methodology. Rather than set a price for all Xcel’s territory, prices could be based in part on location. If a community solar project provides power where more is needed, it could get a higher rate, he said. The same could be true of one in a highly polluted area.

Despite a few misgivings, Chan generally likes how the rate is put together. “The conceptual framework is one where there is broad agreement; the implementation is where it’s tricky.”