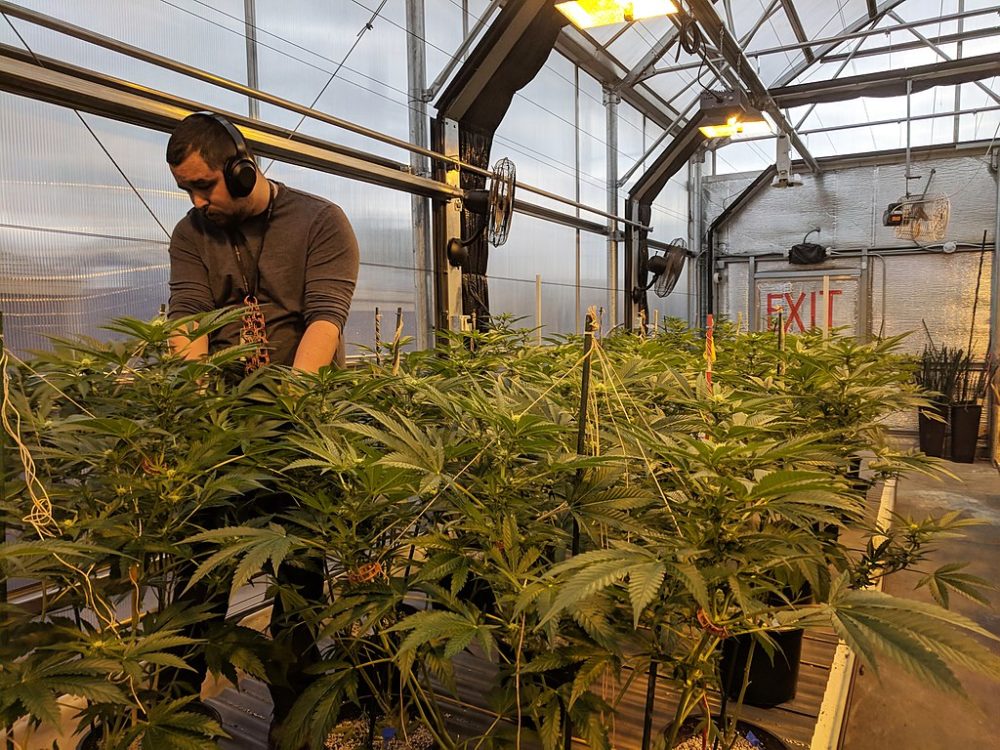 A worker tends to marijuana plants at a grow facility in Denver, Colorado.

The state law seeks to avoid blackouts and other grid problems when its marijuana law takes effect Jan. 1.

When Illinois’ new law legalizing recreational marijuana takes effect Jan. 1, growers will face some of the strongest energy efficiency and reporting requirements in the country.

Marijuana can be an energy intensive crop. The new electricity load to power lighting, heating and ventilation for indoor grow facilities has strained the grid and even caused blackouts in other places after it was legalized.

The Illinois law seeks to avoid those problems by mandating efficiency standards and capping the amount of power used per square foot. Clean energy advocates said they were hopeful the law would lead other states to follow suit, though more work is needed between utilities and growers to manage power demand.

“I think that overall, we ended up in a very strong position with the environmental concerns regarding cannabis in this bill,” said Cary Shepherd, policy director at the Illinois Environmental Council. Shepherd helped draft the legislation’s efficiency requirements along with members of the University of Chicago Abrams Environmental Law Clinic and the Midwest Energy Efficiency Alliance. He noted that Illinois likely won’t be the last state to have a law like this, and efficiency is “an issue that needs to be discussed more publicly.”

Comprehensive data on the cannabis industry isn’t yet available, but other states offered several examples demonstrating the potential grid impact.

In Denver, public health officials in 2018 reported almost 4% of the city’s total electricity use was from cannabis, up from 1.5% in 2012. In the six months after recreational marijuana became legal in Oregon in 2015, Portland-based Pacific Power reported seven blackouts in its service territory from indoor growing operations.

The biggest cannabis-related electricity concerns are for lighting systems and heating, ventilating and air conditioning systems in indoor and greenhouse growing operations. For security, Illinois’ new law requires growers to cultivate in enclosed facilities like indoor operations or greenhouses.

Both lighting and HVAC are accounted for in Illinois’ bill, which outlines specific requirements for lighting power density — the amount of power used per square foot — and “photosynthetic photon efficacy,” a measure of efficiency for plant grow lighting. It also stipulates minimum requirements for the types of high-efficiency HVAC systems growers must use.

The rules don’t dictate specific technology growers have to invest in. For example, the law doesn’t say growers have to use LED lighting. It’s up to the Illinois Department of Agriculture to decide what qualifies and then grant permits accordingly, Shepherd said. He added that when drafting the legislation, much of the focus was on setting up a solid baseline that doesn’t prevent growers from using more efficient equipment that becomes available down the line.

“I think the law goes where it should go at this time,” said Derek Smith, executive director and co-founder of Resource Innovation Institute, an Oregon-based research group that collects data about energy efficiency in the cannabis industry. Smith noted that Illinois is aligned with new efficiency standards proposed in Massachusetts, where regulators are currently updating cannabis laws. This consistency will help build a standard approach as new laws go into effect around the country, he said.

He also pointed out that Illinois stipulates growers must report energy use and efficiency data to the state. This is crucial in an industry that lacks data, he said. “The whole point is the entire supply chain does not know how to optimize these facilities. So we need to collect data, and from that data we can set further targets.”

“Literally no one, as far as I can tell, knows how to optimize efficiency in these environments,” Smith said. Resource Innovation Institute offers a tool called PowerScore, where growers fill out a survey on their energy, water and waste practices and receive an efficiency ranking. The organization collects that data so stakeholders — growers, regulators, utilities and equipment manufacturers — can build an evidence-backed consensus on effective practices.

Smith said data has been gathered from 250 cannabis farms so far. (One industry source estimated 8,781 cultivation licenses distributed throughout the country as of December 2018.) He added that states can use the PowerScore tool for growers to report their data.

Marijuana cultivation is a competitive sector where prices for the product are dropping, making efficiency measures appealing for growers looking to save on overhead costs, said Beau Whitney, vice president and senior economist at New Frontier Data, a firm that researches the cannabis industry. Market forces are driving efficiency measures “much more so than the regulators are doing,” he said.

Still, several industry stakeholders said utilities have an important role to play to encourage efficiency. Even when energy requirements are laid out in laws, “it’s not as simple as saying ‘you must use this technology,’” Smith said. Utilities should implement incentives, especially early on, to achieve wide uptake of efficient technology, he said.

While efficient facility design helps cut costs over time, upfront prices can be steep for LED lighting and high-efficiency cooling systems. This is especially challenging in the cannabis industry, where investors are often hesitant to contribute, Smith said.

Representatives for Illinois’ two investor-owned utilities said that while they don’t yet have cannabis-specific measures in place, they’re preparing for the expansion of the industry.

“We’re still reviewing the energy requirements for these types of facilities,” Marcelyn Love, a spokesperson for Ameren Illinois, wrote in an email. Ameren serves the central and southern regions of the state. “As the industry further matures, we will be talking with the owners of those businesses to better understand what their needs are going forward,” Love said.

ComEd, which serves Chicago and the rest of northern Illinois, launched an agriculture energy efficiency program this year. That program includes incentives for the indoor agriculture sector — for example, 70 cents per watt reduced with LED lighting and $40 for a high-speed exhaust fan.

“To prepare for the expansion of the cannabis industry in Illinois, ComEd is proactively working with peer utilities in states where recreational marijuana is legal,” company representatives wrote in emailed comments. They noted the utility currently has six cultivation centers in its territory, with the potential for more under the new law.

“We encourage customers to involve us early in the planning process to address the needs of each facility and maximize energy savings and incentives,” ComEd said. In addition to the incentives offered through the agricultural program, customers can participate in the utility’s hourly pricing program to shift energy usage off-peak.

“One of the things we started working on with [growers] out of the gates was their lighting,” Kramer said. Energy Trust has recorded about 34 million kilowatt-hours of electricity saved for approximately 150 growing projects since 2013, totaling roughly $4.2 million in incentives. Analysts estimate about 90% of those savings were for lighting.

Currently, Energy Trust offers incentives to eligible growers of 25 cents per annual kilowatt-hour saved and $2 per annual therm saved, covering up to half the cost of a project. Almost all of those incentives are distributed for recreational growers, Kramer said.

While efficiency efforts in the cannabis industry currently focus on more basic measures like lighting and cooling, there’s room for more innovation.

Some growers and researchers are exploring renewable generation, although most growers still operate completely on the grid. For example, of 27 indoor cultivators who submitted data through Resource Innovation Institute’s PowerScore tool, only one reported they were using solar generation, while 16 said they only used the grid. Among greenhouse cultivators, two out of 13 reported using solar, and three reported using wind (though they weren’t necessarily separate cultivators). These numbers were part of a larger report released in 2018 from New Frontier Data.

Cultivators applying for licenses under Illinois’ new law are required to submit in their plans estimates of monthly electricity usage, including onsite generation, as well as any plans for a “sustainable energy use and energy conservation policy,” the law says. Shepherd, at the Illinois Environmental Council, said it’s up to the Department of Agriculture how to interpret that, but he said it’s “very reasonable” to expect that a grower committed to using solar panels, for example, would have an advantage on the application over growers that don’t plan to use similar resources.

“Due to the lack of banking and due to the nascent nature of rules and regulations, it’s really tough to model out the return” of an investment in solar panels and other renewables, said Whitney at New Frontier Data. “If there’s an energy provider or some type of renewable energy council, or some type of local fund where they can provide incentives in order to drive more renewable sources of energy, then we’re recommending they team up with the industry.”

Scale Microgrid Solutions has helped design and implement solutions for operations in multiple industries for the past three years, using solar panels, battery storage and various forms of gas generation. But while the company’s leaders started Scale Microgrid with the cannabis industry top of mind, cultivators make up a very small portion of the firm’s clients, said Duncan Campbell, vice president of development at the company.

Despite the long-term savings potential that onsite generation and storage offer, these projects need upfront financing, “and it’s really hard to do that in the cannabis space,” he said, especially given the continued federal prohibition on marijuana. Meanwhile, the industry is competitive enough right now that growers are more focused on building up their market share quickly to become a leading player, rather than taking the time required to plan for something as complex as a microgrid.

Still, Campbell said, “I don’t think we have to wait 10 years for people to start getting really smart about energy.” More and more suppliers are competing for a place in the market, making cost-saving energy efficiency a larger focus.

He added that with the additional demand on the grid, utilities have more opportunity to build their operations. Hopefully “they’re willing to be more proactive,” he said, whether by implementing efficiency rebates or completing service upgrades. Given the profit opportunity in the industry, he said, “there’s a lot of win-win.”