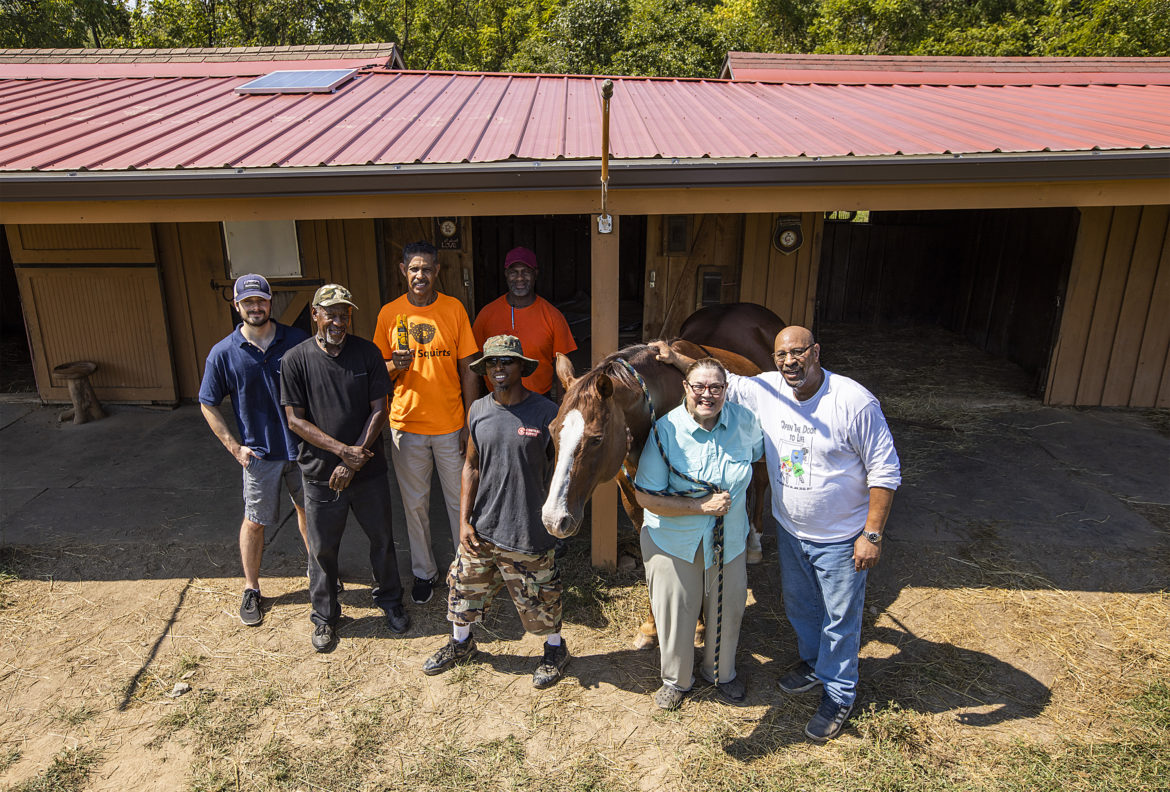 Dhyani Simonini, second from right, is grateful that Richard Walker, far right, and his rookie installation crew could hook up a small solar system to power fans in a Yogaville stable this summer.

The organizer of a recent solar training program reunited participants for the project at a Yogaville horse stable.

YOGAVILLE, Va. — Candi and Copper Penny might just be two of the happiest — and coolest — horses in southern Virginia.

It’s all because the roof over their stable is equipped with a newly installed solar panel that keeps a pair of fans moving air during the ever-increasing number of hot and humid days in the region where the mercury pushes beyond 90 degrees well into September.

“They adore those fans, especially Copper Penny. I have two of the biggest babies you’ve ever seen in your life,” Dhyani Simonini said lovingly about the pair of mares she boards at Yogaville’s organic farm. “I had a fan in each stall and when they cut out, they would stand there cooking.”

That untenable situation prompted her to contact a Yogaville friend, Kenda Hanuman, about a solar training program she had heard about in Union Hill. “She’s the one who connected me to Richard,” Simonini said.

That’s Richard Walker. He’s the mental health counselor with deep roots in Union Hill who cobbled together a solar training program through his longtime nonprofit, Bridging the Gap in Virginia, in mid-June. It allowed 10 area residents to immerse themselves in a week-long solar boot camp taught by a professional trainer.

On a Tuesday in late August, Walker and four other trainees answered Simonini’s plea by meeting at the boiling hot stable in the middle of about eight treeless acres to install the 100-watt, 12-volt monocrystalline solar panel.

“This is a starting point to show that these guys know what they are doing,” Walker said about supervising the rookie crew’s first on-the-ground opportunity. “It took them all of 45 minutes to install that one panel. You would have thought they were professionals.”

Andre Massenburg, a veteran residential and commercial contractor, was thrilled to participate, even though it meant driving more than an hour from his home base in Richmond.

“Part of the agreement from taking that training was that we would pitch in and help out with other projects whenever Richard calls,” the 58-year-old said. “Anytime we can make something like this happen, it’s excellent.”

Massenburg figures Simonini’s solar kit cost about $400 — which will pay for itself in short time.

“It’s going to take her off-grid to run the fans so she’ll be getting free energy,” he said, adding that she can store energy in her marine battery and maybe eventually add lights to the stable.

Simonini, a retiree who taught English, theater and creative writing at Buckingham County High School for 31 years, is an integral part of Yogaville.

The 660-acre spiritual center along the banks of the James River — complete with the iconic Light of Truth Universal Shrine (LOTUS) — started in 1979 as the longtime dream of Swami Satchidananda. Though he died in 2002, the nonprofit organization has evolved into a haven for yoga programs, retreats and trainings. A community of homeowners has sprouted up around the retreat.

Simonini recently received the solar panel and the converter box as a thank you gift from a group of women enrolled in her introductory yoga class. She began exploring installation options this summer after a local commercial company told her the stable project was too small to bother with.

“But it’s important if you’ve got live beings you’re trying to keep cool,” she said about her persistence.

All of Yogaville is served by the Central Virginia Electric Cooperative, but the farm wasn’t wired for two fans to run 24/7, especially during storms. And when they operated, it was an extra expense for Simonini.

“This was just synchronicity,” she said about Hanuman linking her with Walker.

Hanuman, who lives in a straw bale house, has called Yogaville home for 26 years.

Bonds between Yogaville and Union Hill — 15 minutes apart by car and both roughly 70 miles west of Richmond — have blossomed since the words “Atlantic Coast Pipeline” entered their respective vocabularies in 2014. If built, Dominion Energy’s pipeline would bisect Virginia for roughly 300 of its 600 miles to move hydraulically fractured natural gas from West Virginia to North Carolina.

Hanuman co-founded Friends of Buckingham with Chad Oba, of Union Hill, to educate neighbors about the hazards of natural gas pipelines and the compressor station approved for construction in Union Hill.

Both women showed support for Walker’s solar training initiative in June by attending a celebratory fish fry for graduates at Union Grove Missionary Baptist Church. Participants attended classes in the church’s Fellowship Hall and received hands-on lessons by studying two relatively new solar projects in Yogaville — a ground-mount system for LOTUS and a rooftop installation on the all-purpose Sivananda Hall.

Walker had watched arguments about the pipeline cleave longtime family and neighbor relationships. Those rifts gnawed at his heart because eight generations of his family have called Union Hill home since free blacks and former slaves settled in Buckingham County after the Civil War.

Finding an alternative to fossil fuels and healing his small rural community motivated Walker to pursue a grant from the Mertz Gilmore Foundation so he could offer those initial solar scholarships to underemployed area residents.

He sees the Yogaville horse stable as the first tiny opportunity for that crew. Next, he wants to use the leftover foundation money to attract matching grants so Union Grove homeowners can benefit from rooftop solar installed by the trainees.

“If we don’t use this knowledge, it just sits on a shelf and goes dead,” said Massenburg, the Richmond contractor.

He has no intention of letting his skills go dormant. His company, Construction Services, is already incorporating rooftop solar on two new $325,000 homes in Richmond.

“Solar should be automatic because it upgrades the house,” Massenburg said. “The sun is producing power that’s free. We all need to tap into that and give everybody access.”

For Simonini, projects completed with love and care can help to mend racial and familial divides.

“This is all tied together, just like the way you make a dreamcatcher,” she said, referring to her Native American roots. “If one thread is broken, the world is depleted.”

Now that her horses have moving air, next on Simonini’s list might be a solar upgrade that could support a freezer. She noted that the water she pours into portable tubs becomes steamy quite quickly.

“Horses don’t want to drink hot tea,” she said. “I’ve been going to McDonald’s every day and buying four pounds of ice just so they have cold water all day.”