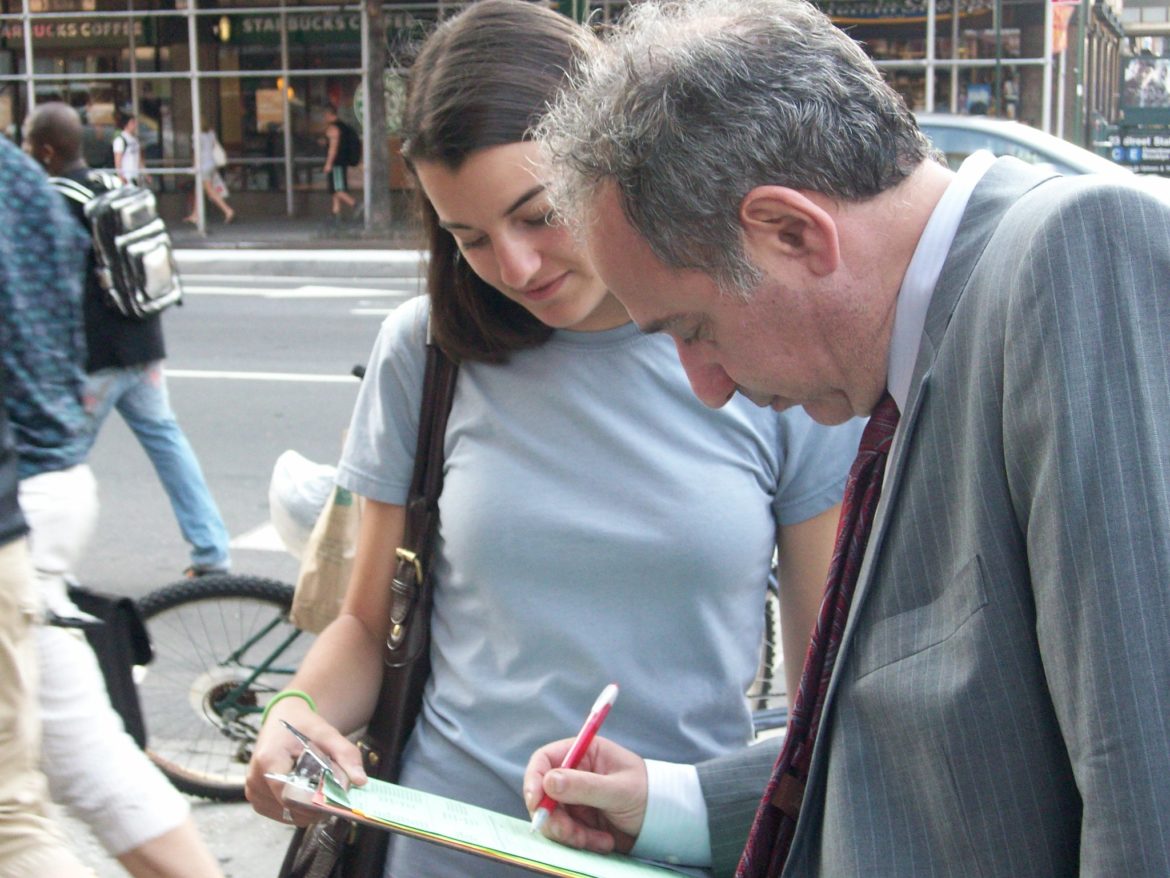 A voter signs a petition.

The video ad starts like a horror film trailer.

“They” are “coming for our energy jobs. The Chinese government is quietly invading our American electric grid.”

The ads have circulated in recent weeks along with a massive print and mail campaign, all attempting to undercut a potential referendum on FirstEnergy power plant subsidies.

The ads imply that signing the petition would give voters’ personal information to the Chinese government — a conspiracy theory that has been substantially debunked.

Yet questions remain about where the money is coming from to fund both the petition drive for a public vote on FirstEnergy’s subsidies and the inflammatory campaign against it by a group called Ohioans for Energy Security.

“The group operates largely in the shadows in terms of their funding,” Dave Anderson, policy and communications manager for the Energy and Policy Institute, said of Ohioans for Energy Security.

Here’s what’s known so far — and what’s not known.

Ohioans for Energy Security is aggressively campaigning against a petition effort to put the state’s nuclear bailout law to a public vote.

The ads aim to prevent a referendum on a new law, House Bill 6, which will add charges to electric customers’ bills to subsidize nuclear and coal plants while gutting the state’s clean energy standards.

Ohio lawmakers passed the law in July, and a group called Ohioans Against Corporate Bailouts began working on a referendum initiative soon after. Ohioans’ right to seek a referendum on legislation is guaranteed by Article II of the state’s Constitution.

On Aug. 30, the group got a go-ahead from the Ohio secretary of state to start collecting signatures for the referendum petition. Supporters need to collect approximately 266,000 signatures to get the issue on the ballot next year.

Even before that approval came, Ohioans for Energy Security began its aggressive ads aiming to keep voters from getting a say on the bill’s coal and nuclear bailouts.

It’s not clear who’s behind Ohioans for Energy Security, and the group isn’t required to disclose the funders for any of its anti-referendum ads during the petition drive. The group has filed incorporation papers with the Ohio Secretary of State, which serve to limit its legal liability under state law.

Those papers, filed on July 30, show attorney Donald Brey as the sole “authorized representative.” Patrick Pickett signed on behalf of statutory agent IW Agent, LLC. Pickett and Brey are both partners at the Isaac Wiles law firm in Columbus, which shares its business address with IW Agent.

The group’s lawyers won’t answer questions about its funding.

Brey, Pickett and their partner Mark Weaver did not answer the Energy News Network’s questions about who pays for the firm’s services for Ohioans for Energy Security. The lawyers likewise declined to identify the officers, directors and shareholders of the corporation.

“We have not and do not represent FirstEnergy,” Weaver also said. “We do represent a wide range of political action committees and non-profit organizations that are independent associations with First Amendment freedom of speech rights.”

Weaver’s email did not make any statement about whether it had represented FirstEnergy Solutions. People and companies have also sometimes paid for attorney fees or expert expenses in legal matters where a lawyer technically represents other individuals or entities.

The firm had acted as outside counsel for the Office of the Ohio Consumers’ Counsel in a case seeking refunds for unlawful overcharges by FirstEnergy utilities for renewable energy credits that they had bought from their affiliate, FirstEnergy Solutions. That past representation “presents no legal ethics issues with respect to our current representation of any political action committee or non-profit organization,” Weaver said.

Public records reveal associations between the anti-referendum group’s spokesperson and another group with connections to FirstEnergy Solutions.

LoParo has also acted as spokesperson for the Ohio Clean Energy Jobs Alliance. The group’s website describes it as a “coalition of Ohio community leaders and organizations committed to preserving the jobs, economic benefits, carbon-free energy and electricity grid reliability” of nuclear energy. The group ran ads in favor of the nuclear and coal subsidy bill, House Bill 6, when it was pending in the legislature.

“Powered by FirstEnergy Solutions,” says a note at the bottom of the alliance’s home page, though it does not provide details about what that means.

LoParo has told the Energy and Policy Institute that the Dewey Square Group lobbying firm had acted “on behalf of FES [FirstEnergy Solutions] and the Ohio Clean Energy Jobs Alliance to advocate for keeping the state’s nuclear plants open.” And bankruptcy case filings show charges by consultants for FirstEnergy Solutions supporting the launch of the alliance and coordinating with it.

Documents obtained by the Energy and Policy Institute through public records requests also show that a consultant for FirstEnergy Solutions provided “draft testimony” on HB 6 to public officials from Summit County, which is listed on an alliance website as a coalition supporter.

“Please refer to FES’s statement and lawsuit on the referendum,” spokesperson Angela Pruitt responded to Anderson when he asked whether FirstEnergy Solutions was funding Ohioans for Energy Security and why company employees were in the ad. Neither document answers the questions.

Ohioans for Energy Security used one of the same contractors that Generation Now used for its ads pushing for passage of the nuclear subsidy bill.

A Federal Communications Commission filing posted by OpenSecrets.org shows that Strategic Media Placement arranged to air the anti-referendum ad for Ohioans for Energy Security. Strategic Media Placement also arranged to air ads from Generation Now, a pro-subsidy group that pushed for passage of the nuclear subsidy bill. FirstEnergy Solutions employees Messenger and Humble also appeared in at least one of the group’s ads.

Generation Now is also reported to have made substantial “dark money” contributions to elect Ohio Speaker of the House Larry Householder and others sympathetic to nuclear subsidies. At least one donor to that group is the International Union of Operating Engineers, Local 18, based in Cleveland. Some of the union’s members likely work at FirstEnergy Solutions plants.

It’s unclear who else is funding Generation Now. The union’s $295,000 in 2019 spending for the group is less than a sixth of the more than $1.9 million the group reportedly spent on ads supporting HB 6. The group is not required to disclose its funders.

The group has been paying people to hover near folks seeking to collect signatures for the referendum petition. Those “field staffers” are sometimes referred to as “blockers,” because their presence can discourage voters from listening to those who seek to explain a referendum.

Referendum supporters’ funding is also a secret, but may be revealed later.

“The funders of the TV ads, direct mail and blocking against the issue have no obligation to disclose their funders or expenditures,” said Gene Pierce, spokesperson for Ohioans Against Corporate Bailouts, which is trying to get the referendum on the ballot. “Ohio law only requires disclosure of such expenses once the issue is qualified to the ballot and only on expenses incurred after such qualification.”

The referendum initiative group’s corporate filing with the Secretary of State also reveals only its attorney, David R. Langdon of West Chester, Ohio, as its authorized agent for incorporation and statutory agent. Pierce said the group’s funders “will be revealed, as required by Ohio law, 30 days after” petitions are filed next month. The group needs to collect approximately 266,000 voters’ signatures.

Bill Siderewicz, president of natural gas power plant developer Clean Energy Future, has already been reported to be a contributing member of Ohioans Against Corporate Bailouts. LoParo has claimed that a Chinese bank provided financing for some of that company’s projects. FirstEnergy has received loans from the same bank.

“I expect voters will see that our donors,” Pierce said, “reflect a wide range of residential and commercial interests who are all negatively impacted by this legislation.”