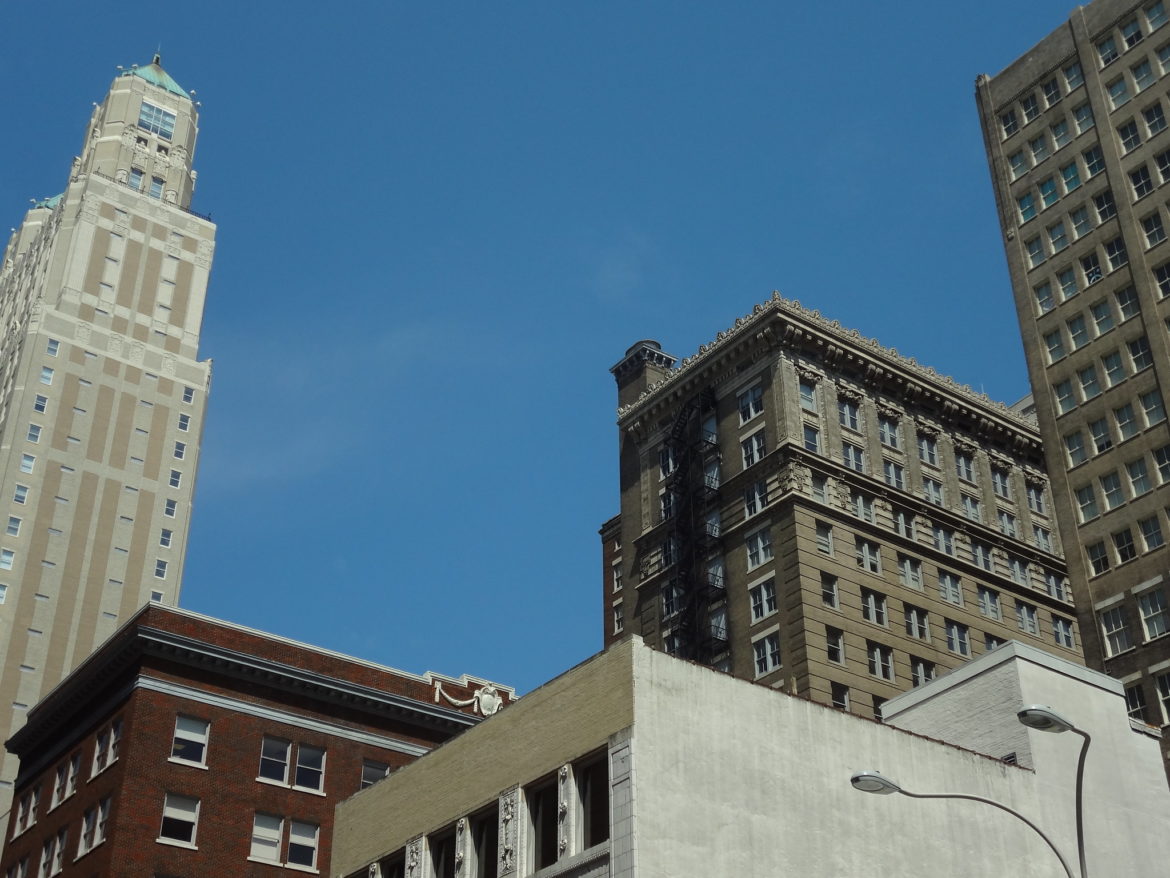 Historic high-rises in downtown Kansas City, Missouri. Energy efficiency advocates are hoping to expand access to efficiency upgrades for renters in the city, who are often underserved by utility and other efficiency programs.

A recent summit and regulator hearings this week have brought attention to apartment building energy efficiency.

Advocates in Kansas City are trying to bring attention to an underserved area for energy efficiency spending: apartment buildings.

At a recent summit and at state regulatory hearings this week, ideas are being pitched for expanding interest in and access to energy efficiency for renters.

Across the country, the multifamily market has been historically underserved by utility and other efficiency programs, according to a report published in April by the American Council for an Energy Efficiency Economy.

Multiple factors interfere with the uptake of efficiency measures in subsidized housing and other multifamily structures. They include the split incentive created when the owner of the structure is not the one paying utility bills, and a lack of resources, “not only financial, but time and staff,” said Stefen Samarripas, one of the authors of the report.

Several solutions are being floated in Kansas City. Missouri’s Office of Public Counsel, which represents customers in utility regulatory matters, along with clean energy advocate Renew Missouri, is urging state regulators to direct Kansas City Power & Light to adopt an on-bill repayment system that would overcome the initial financial hurdles in efficiency upgrades.

This week, regulators held hearings on the company’s broader package of proposed efficiency measures introduced under the Missouri Energy Efficiency Investment Act. KCP&L is seeking regulators’ permission to earn a profit on an investment of $96.3 million for the period ending March 31, 2022. It anticipates reducing demand by 185.9 megawatts in the first year.

Even in cases where building owners don’t pay for heating and cooling, they stand to benefit from lower utility bills, according to Sara Lamprise, buildings and transportation program manager for the Metropolitan Energy Center.

“When you have a more efficient building, you attract a higher caliber of tenant … a more informed consumer,” she said. “You’re more likely to keep a tenant longer. You don’t have to worry about them having to leave because of an inability to pay their utility bills.”

The conference also aimed to motivate tenants. Many don’t know why efficiency “should be on their radar” Lamprise said, or are afraid to raise the issue. “I think a big part of that anxiety comes from not knowing what you have the right to ask for, and not knowing how to frame that conversation.”

The energy center is collaborating with a recently formed organization called KC Tenants, which is drafting a renters’ bill of rights. Lamprise said it will include a section about utility service.

Lamprise recounted the actions of one tenant — a Kansas City college student doing an assignment a few years ago for a geosciences class at the University of Missouri-Kansas City — who set out to get the drafty windows replaced in the rental house where she lived.

She persuaded the owner to commit to installing new windows throughout if the tenants would pay the bill. Then she convinced each of her dozen or so renters to pitch in $50 a month for three months.

The owner had the windows installed. Everybody benefited, according to Molly Davies, the assistant professor of geosciences who made the initial assignment to tackle a real-world problem. The building was improved, the utility bills decreased and so did the drafts.

While that student managed to cobble together the funds to install new windows, the often-substantial cost of efficiency improvements tends to be insurmountable. According to Samarripas from the American Council for an Energy Efficient Economy, it is one of the leading factors discouraging people — especially those with limited funds — from making their homes and businesses more efficient.

The Missouri Public Service Commission is considering, among other things, whether to require Kansas City Power & Light to offer customers a funding mechanism that would allow them to make efficiency upgrades without investing any money upfront.

Pay As You Save is a trademarked approach to funding efficiency upgrades that now is operating in 17 utilities across the country. James Owen, executive director of clean energy proponent Renew Missouri, and Geoff Marke, chief economist with the state’s Office of Public Counsel, want KCP&L to adopt it as well.

State regulators expressed curiosity about the funding mechanism a few years ago and instructed KCP&L and the state’s two other investor-owned utilities each to pay for a study of the feasibility of Pay As You Save, or PAYS. In its analysis for KCP&L, the Cadmus Group determined that the approach could “fill a gap in the financing market and increase residential uptake of energy efficiency improvements.”

The consultants warned that the biggest obstacle would be finding low-cost capital, and doing it in a way that would satisfy regulators.

Pay As You Save makes capital — provided either by the utility or a third party — available to customers to make energy-efficiency improvements based on the outcome of an audit and cost-effectiveness analysis. Repayment is bundled in with a customer’s bill. Because improvements are permitted only if their benefits exceed their cost, customer bills actually decrease in the majority of cases.

Although PAYS has not been adopted widely, it’s been a great success with several utilities — mostly rural co-ops — including Midwest Energy in Hays, Kansas, and the Ouachita Electric Coop in Arkansas.

In testimony filed with regulators, Marke wrote that PAYS “enables deeper energy efficiency and demand savings to customers that do not have thousands of dollars of disposable income to make energy-related investments, which includes most of the residential customers across KCPL’s service territory if key economic indicators are to be believed. If stakeholders are really serious about energy efficiency, they should support a PAYS program.”

Marke proposes a one-year pilot, after which “either the PAYS program will be successful and … can be ramped up or it will not and stakeholders can move on.”

Owen, with Renew Missouri, said he hopes regulators will require Kansas City Power & Light as part of the next cycle of its energy-efficiency program to develop a PAYS option for renters, homeowners without access to credit, small businesses and smaller governmental entities,

Under Pay As You Save, the utility provides the funds and owns the energy upgrades until they’ve been paid off, according to Harlan Lachman, one of the program’s designers and the president of the Energy Efficiency Institute. He said payments typically are spread out over 10 or 12 years and are incorporated into the utility bill. When a customer moves, the payments — along with the energy savings — accrue to the next renter or owner.

Kansas City Power & Light spokeswoman Gina Penzig said the company has not proposed or agreed to any type of Pay As You Save program as part of its filing.

Samarripas from the American Council for an Energy Efficient Economy takes a middling position.

“From what I’ve seen, it seems helpful in certain situations for certain types of customers,” he said. “It may not solve all of the challenges that utility programs run into, but it seems to be making an impact.”