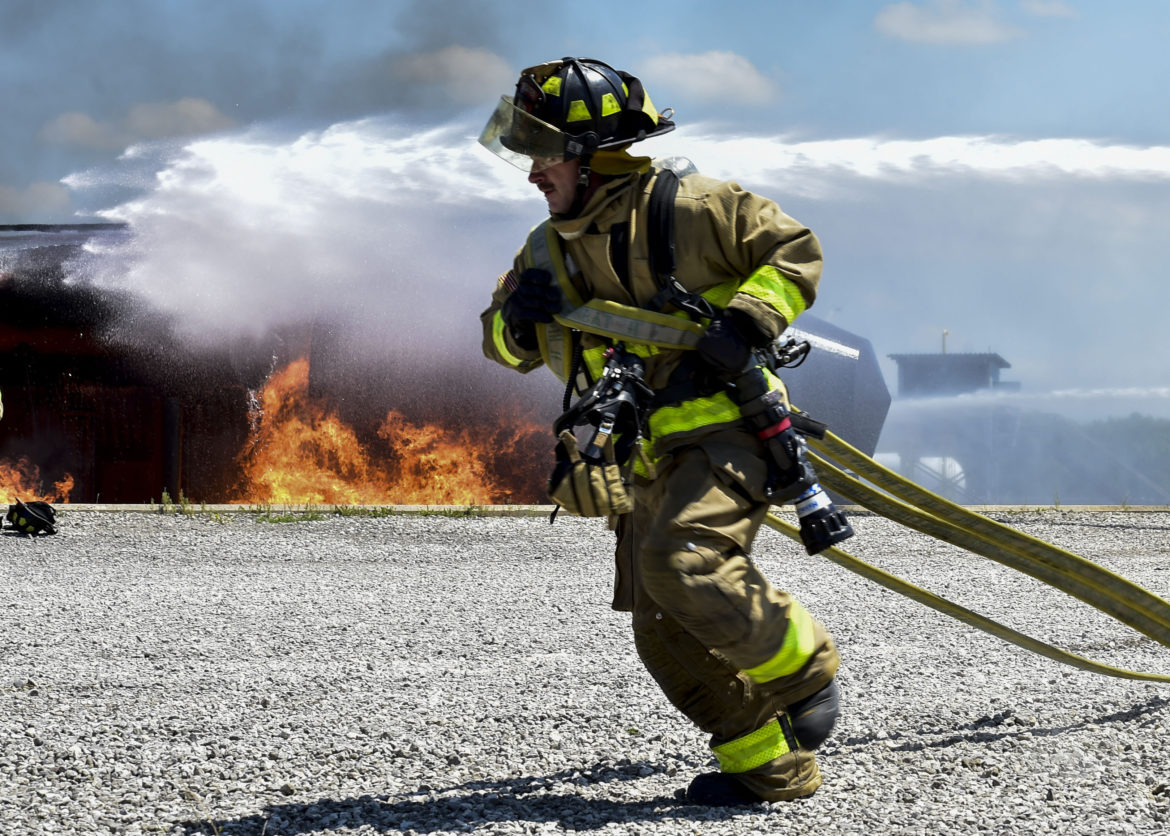 An Army firefighter stationed in Mansfield, Ohio, rushes to unravel a fire hose during a rescue firefighting exercise.

Companies injected trade secret chemicals into more than 1,400 wells in the state from 2013 to 2018, a report says.

Ohio firefighters and emergency responders are being kept in the dark about potentially hazardous chemicals used in hydraulic fracturing.

Oil and gas companies are using a “trade secret” exemption to avoid disclosing the full mix of chemicals used at drilling and well sites in the state.

“We need a better system to ensure the safety of our first responders and residents in areas affected by oil and gas drilling,” said Miranda Leppla, vice president of energy policy for the Ohio Environmental Council.

The problem was highlighted in a recent report by the Partnership for Policy Integrity, an energy policy advocacy group based in Washington, D.C.

Ohio law requires drillers to report which chemicals they use in fracking, but some information can be kept secret from the public.

Ohio’s laws and regulations call for companies to report drilling chemicals to the Ohio Department of Natural Gas within 60 days after a well is completed. Chemicals used for fracking must be reported to the department or to a multistate chemical disclosure registry known as FracFocus.

However, both requirements let companies claim trade secrets for the ingredients of various chemicals, so the general public can’t get that information. The Department of Natural Gas generally can’t disclose it either, so first responders can’t get the information before an emergency situation comes up.

Companies claimed trade secret protection for at least one chemical used at more than 1,400 Ohio oil and gas wells from 2013 to 2018, according to the September 2019 report from the Partnership for Policy Integrity. The report draws on data, mapping and analysis from the FracTracker Alliance, which has an Ohio office in Shaker Heights.

Many of those chemicals could be toxic, said report author Dusty Horwitt. He based that conclusion on a review of U.S. Environmental Protection Agency records dealing with new chemicals proposed for drilling and fracking between 2003 and 2014.

“EPA routinely identified health concerns with these chemicals ranging from lung toxicity to neurotoxicity to developmental toxicity,” Horwitt said. “And yet the agency also routinely allowed those chemicals to be used commercially in oil and natural gas wells, oftentimes with confidentiality claims preventing the public from knowing what the identities of those chemicals are.”

Horwitt and others aren’t sure which trade secret chemicals used at oil and gas wells in Ohio might pose particular health concerns — primarily because the identities of those chemicals remain secret.

Other industries generally inform first responders about the ingredients of chemicals used at their facilities, under the federal Emergency Planning and Community Right-to-Know Act. An October 2017 guidance document from the Ohio Environmental Protection Agency takes the position that reporting to state Department of Natural Gas rather than to local responders satisfies the requirements.

Public safety advocates say the secrecy puts firefighters and others at greater and unnecessary risk in the event of an accident.

The risks presented by unknown chemicals affect dozens of fire departments and other emergency responders, particularly in the eastern part of the state where oil and gas activity is concentrated, critics report.

“I have to make a determination within the first 30 minutes of what I’m going to do as an incident commander,” Caggiano said. “I don’t have time to wait for someone to call me back with the information.”

Water will spread some chemical fires, rather than extinguish them. Other chemicals will either float on or sink in water. In case of a spill, the information could determine whether responders should use a certain type of dam or siphon. Still other chemicals could readily bond with each other to form more troublesome compounds.

“Putting a government entity between first responders and the information that they need to effectively do their job is just unconscionable,” Caggiano said.

David Bernzweig, director of Health, Safety and EMS for the Ohio Association of Professional Firefighters agreed with Caggiano’s concerns.

“We’ve been very concerned about that for some time,” Bernzweig said.

The association is concerned about the environmental impacts of the chemicals and the health risks to firefighters responding to accidents or fires. “And this stuff is on roadways all over the state,” he said, referring to the many trucks carrying materials to and from well sites.

A lack of information delayed action and frustrated first responders at a 2014 well pad in the eastern Ohio village of Clarington. Information about the chemical makeup didn’t reach Monroe County Emergency Management Agency Director Phillip Keevert or other firefighters until days later. Even the Ohio EPA lacked that information, the Columbus Dispatch reported in 2014.

Teams try to plan for worst-case scenarios, Caggiano said. Fire departments also need to know what equipment they might need for special situations. “Three o’clock in the morning is not the time for me to say, ‘Gee, I wish I had $300,000 to buy this widget,’” to deal with a particular contingency, he said.

“I don’t want to hear that we’re safe … because we don’t have accidents,” Caggiano said. “That’s bullcrap. Everybody has accidents.”

Critics of the system say the public — or at the very least, the local emergency response authority — deserves better information about potential hazards.

Advocates have tried multiple times to get more disclosure about what’s in chemicals used at Ohio oil and gas wells. There’s still no sign that state lawmakers will act soon.

Critics say the current system is a public health issue as well as a public safety one. People sometimes test groundwater to have a baseline about what’s there before contamination from nearby oil and gas wells might occur. If people don’t know the full range of chemicals to test for, that exercise could be less effective, according to the Partnership for Policy Integrity report.

A lack of knowledge also increases groups’ concern about possible reuse of wastewater from wells. “As long as there are proprietary questions, we have to question how anyone can safely reuse frack waste for anything,” said Lea Harper, managing director of the FreshWater Accountability Project.

The U.S. EPA also has acknowledged that data gaps and uncertainties have limited its ability to characterize potential risks to groundwater, the report noted.

The oil and gas industry and its allies in state government have opposed efforts to give emergency responders better information.

In early versions of budget bills in 2013 and 2015, advocates pushed to include language that would have let the chief of the Ohio Department of Natural Gas disclose proprietary information to first responders. The language was soon deleted, although it’s unclear which specific lawmakers made those decisions. And advocates’ objections to other bill language cementing the current system didn’t sway lawmakers.

Lawmakers’ lack of action fits into a broader pattern of actions friendly to the state’s oil and gas industry. For example, lawmakers have preempted local zoning authority over drilling operations. Lawmakers have also resisted multiple efforts to increase severance taxes for the industry.

Executive Vice President Matt Hammond at the Ohio Oil and Gas Association said the Partnership for Policy Integrity report “is designed to create uncertainty, fear and doubt to push an agenda. The fact of the matter is that as an industry we protect human health, safety and our environment during operations by following common sense, transparent rules” in current Ohio law.

The Partnership for Policy Integrity suggests that chemicals should be disclosed in a randomly ordered list without explanation of which specific products or steps they are used in. That way the risk of exposing trade secrets to competitors would be minimized.

A list of ingredients “does not a recipe make,” Caggiano said. “You can’t see a whole list of products and know how to put these things together.”