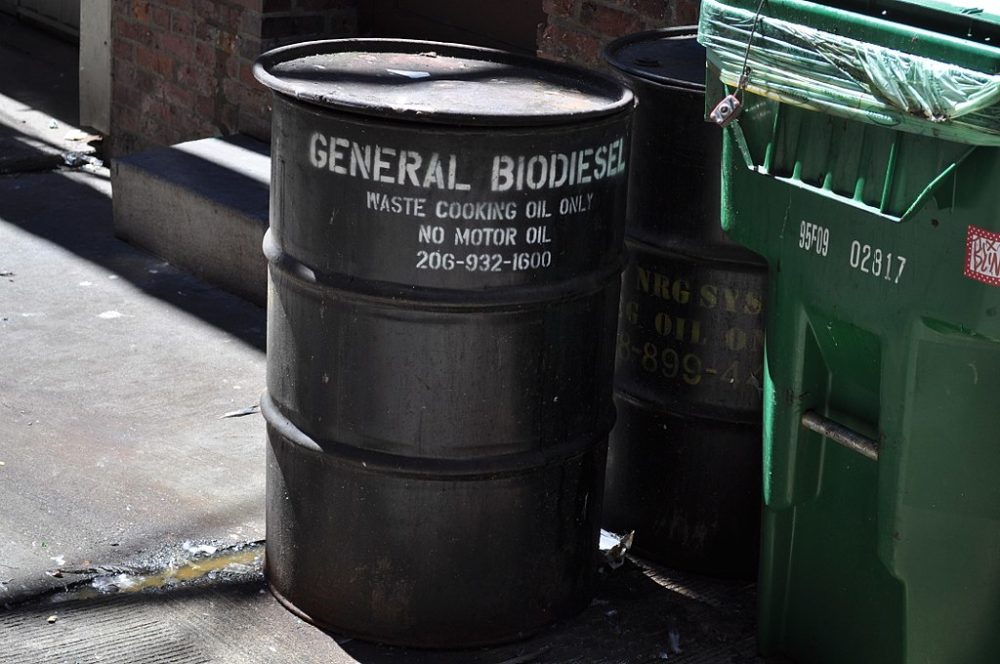 A can for the collection of used cooking oil as an input to making biodiesel in Seattle, Washington.

The industry sees fuels made from vegetable oils, animal fats and other sources as a path to net-zero emissions.

Sean Cota, president and chief executive of the Massachusetts-based organization, said they hope to reach these goals by dramatically boosting the use of biodiesel in home heating fuel.

Biodiesel is a biodegradable fuel manufactured from vegetable oils, animal fats, recycled restaurant grease and other materials. Much of the heating oil used in New England already contains some biodiesel, but its use is not required in every state.

“Some companies have been very aggressive. Others have been less aggressive,” Cota said. “We need to have some standards. Part of our future effort will be to have everyone at similar levels as quickly as possible.”

Charles Uglietto, the owner of Cubby Oil, in Somerville, Massachusetts, began trying biodiesel blends in 2008 after a pitch from soybean farmers at a Boston event. (About half of all biodiesel produced in the United States is made from soybean oil, according to the Union of Concerned Scientists.)

He started with 5% biodiesel — referred to as B5 in industry shorthand — and gradually upped the levels. Now he delivers a B40 blend to all of his customers.

“This product has worked seamlessly both in old equipment and newer equipment,” he said. “And it burns cleaner than our ultra-low-sulfur heating oil.”

Uglietto would like to see state legislatures adopt a mandate that would require all oil dealers to sell only a B50 blend by 2030.

The New York Heating Oil Association has successfully pushed for such mandates in the New York City metro area. In 2016, the city passed a law requiring B5 blends in all buildings by 2017, and rising incrementally over time to reach B20 by 2034. A B5 blend is also mandated for several counties around the city.

The across-the-board mandate could help preserve the region’s many family-owned heating oil businesses as states move away from fossil fuels, while also reducing carbon emissions at little cost to consumers, Uglietto said.

“Unlike this idea that we’ve got to convert everybody to electric heat pumps, this gives us a real alternative, to say we can begin to achieve those reductions just by changing our fuel,” Uglietto said.

But Caitlin Peale Sloan, a senior attorney with the Conservation Law Foundation, says it’s more complicated than that.

Biofuels aren’t necessarily always greener, she noted. It depends on the source of the fuel and “the life cycle emissions — meaning, what’s the impact of growing the biomatter that gets turned into fuel? What goes into growing and harvesting it? You have to kind of net that all together.”

As fuel markets began snapping up all the domestic soy, the food industry turned from soy to palm oil, which is harvested from oil-palm trees. That has rapidly accelerated its cultivation in Indonesia and Malaysia, destroying rain forests and elevating carbon release.

“Demand for biodiesel in the U.S. and Europe is contributing to the ongoing expansion of palm oil production in Southeast Asia, which in turn is tied to significant climate-damaging deforestation,” Lewis said.

Cellulosic biofuels made from grasses, wood or algae may have a greater possibility of lowering carbon emissions relative to oil, Peale Sloan said.

Biofine Developments Northeast, in Bangor, Maine, has been working on a biofuel made from wood waste. The University of Maine’s Forest Bioproducts Research Institute successfully tested the fuel in an institutional boiler used to heat its Presque Isle campus, said Hemant P. Pendse, the chair of the institute’s chemical and biomedical engineering department.

The company has also worked with the National Oilheat Research Alliance to develop the fuel. Earlier this year, it was awarded a $750,000 grant from the Maine Technology Institute for commercial development of a large-scale biorefinery.