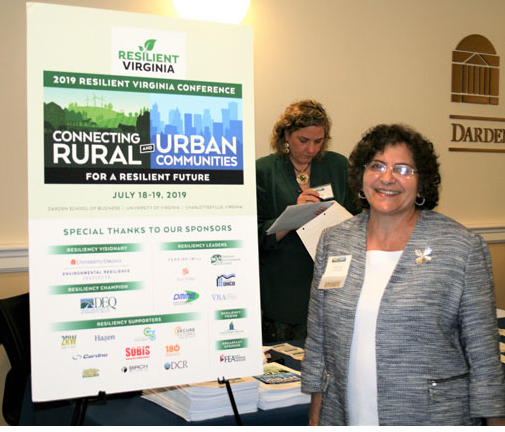 Annette Osso at a Resilient Virginia conference in July.

RICHMOND, Va. — Annette Osso had every intention of becoming an anthropologist after earning master’s and undergraduate degrees in the subject at George Washington University in the nation’s capital.

But the power of the very first Earth Day proved to be more of a lure. Instead of digging into the intricacies of human culture, she opted to shape the future of clean energy in Virginia — and beyond — after that environmental awakening on April 22, 1970.

The 70-year-old is now the managing director of Resilient Virginia, a nonprofit dedicated to educating communities about adapting on every level to a changing climate.

She has spent most of her career in Virginia and Washington, D.C, with a brief detour to Portland, Oregon, in the 1980s. She also has expertise in green building standards and home energy audits.

Osso’s organization joined with four other local green groups to host the inaugural Virginia Clean Energy Summit on Sept. 17 in her hometown of Richmond.

She and more than 400 other attendees were thrilled that day when Democratic Gov. Ralph Northam issued an executive order during his keynote address. His vow for Virginia to transform its electric grid to 100% clean energy by 2050 was the most significant takeaway.

Osso also knows that accomplishing such a task is more difficult than stating it.

“It’s not perfect, but of course people will criticize everything,” she said about the order. “My group will be in there asking how we can help meet those goals.”

Q: Resilient Virginia was launched in 2014, but doesn’t it have deeper roots in the state?

A: Yes, it evolved from several organizations. Karl Bren, who is still around, is the godfather of the green building movement in Virginia. He worked for the Virginia Housing Development Authority and was very passionate about affordable housing. In 1995, he caught the green building bug and formed a nonprofit that morphed into the Virginia Sustainable Building Network (VSBN).

He and I met at a Washington conference that year and I was working with him by 1996. I served as president of the network through 2013. With mostly federal money, we launched a series of trainings around the state with groups like Habitat for Humanity to educate and train people in the benefits of affordable housing and green buildings. VSBN became the face of green building in Virginia at the commercial, institutional and residential level. Our biggest accomplishment was getting the Virginia Homebuilders Association involved.

Money tapering off at the federal level and the rise of groups such as the U.S. Green Building Council, Viridiant (formerly EarthCraft Virginia) and the Local Energy Alliance Program made us re-evaluate.

We thought, wait, we have a fantastic network and have worked all over the state. Shouldn’t we use that to do something else in Virginia? We agreed that adaptation to climate change needed to be tackled, but decided to frame it as making communities more resilient. It’s a concept that needs to be communicated to every homeowner, business and institution. So, we changed our mission along with our name.

Q: What are your top three hopes and goals for Resilient Virginia?

A: Two are short-term goals.

One, we want to work with partners in the building industry to map out how we actually reach 100% clean electricity by 2050. That requires us to look at energy efficiency, energy production and complicated policies such as building codes.

Two, we need to emphasize resiliency in rural Virginia, where agriculture, forestry and tourism are so vital. Carbon can be sequestered in soil if some practices on farms are changed. Planting more trees leads to bigger carbon sinks. And we need to figure out how to best balance food production on farmland with energy production, whether it be solar or wind.

The conference we had in mid-July was all about connecting rural and urban communities with resiliency as the link.

For the longer term, Virginia needs to create a statewide resiliency plan. In 2018, Northam launched an executive order that calls for a master plan for Hampton Roads because those communities are on the coast. (Note: The “Roads” in Hampton Roads is derived from an old term for a safe, deep-water passage. Norfolk, Virginia Beach, Chesapeake, Portsmouth, Newport News, Hampton and Suffolk are the seven cities in the region.) Expanding that requires delving into state agencies to see who is doing what, where the gaps are and what needs to be strengthened. That will take who knows how long.

Q: For you, what was the most refreshing moment or result of the September summit in Richmond?

A: Definitely the size. It’s clear there is pent-up demand to talk about clean energy. The rise of the solar industry in the state helped to make this conference possible. This type of event was needed for a long time and it represents the strength of the renewable energy sector. Energy efficiency has not taken off in the same way yet.

Q: You mentioned that such gatherings in Virginia used to be quite small and often dominated by the fossil fuels industry. What type of evolution  have you witnessed on that front?

A: Actually, our network had 500 people turn out for what we called the Virginia Sustainable Futures Conference in 1999. The draw was our main speaker Will McDonough, the architect, designer, author and Charlottesville resident who was then the dean of the School of Architecture at the University of Virginia.

Later, a group of state agencies, environmental consulting firms and corporations added the energy sector to its list of topics. Both of our groups agreed there should be an annual conference and that we would trade off organizational efforts every other year.

That all became strange in 2010 when it was our turn to host. We had invited state agencies to participate. The trouble is that Gov. Bob McDonnell’s energy adviser basically took it over and turned it into a conference about fossil fuels.

Q: The crowd in the convention center erupted with applause when Gov. Northam announced his plan for the state to derive 100% of its energy from renewables by 2050. Does his executive order go far enough?

A: This order goes farther than any Virginia governor has ever gone. The good news is that Northam is directing agencies to act.

One shortcoming is that it doesn’t state specific goals of how it will be phased in. We need transparency and a reporting methodology that any citizen can access. As the saying goes, if you can’t measure it, you can’t manage it.

It’s great that energy storage was added, but microgrids for critical buildings and infrastructure need to be addressed.

Also, Virginia has to aggressively increase its energy efficiency. Directing state agencies and public institutions to reduce electricity use 10% by 2022, with 2006 as the baseline, is ridiculously low to begin with. That needs to be ramped up.

Q: How can the Northam administration accelerate resiliency planning?

A: It used to be that outside of Hampton Roads, people didn’t know what we were talking about when it came to resiliency. But an increase in extreme weather events has changed that scenario. So, once again, I’ll go back to the need for a statewide resiliency plan.

This is where politicians and businesses can wield a lot of power and say, wait we need some attention paid to us. They know there’s a need for economic development in rural areas and all of these adaptations can be part of it. Farmers are sensitive to weather-related issues that can destroy crops and increase problems with invasive species.

Q: Clean energy has traditionally been a nonpartisan issue. Still, all Virginians have their eyes on the November 2019 election, where all 140 seats in the General Assembly are on the ballot. Republicans have slim majorities in both the House of Delegates and Senate. What difference will it make for resiliency legislation if Democrats flip one or both chambers?

A: It should not be a partisan issue. If we’re going to move forward in a rapid matter, we have to have politicians that will vote for regulatory changes — and that has not traditionally been the Republicans. So, you’d have to have a shift in the legislature.

Some Republican legislators from coastal areas have been converts in acknowledging that climate change is happening because their infrastructure, roads, buildings, ports and tourism are all being affected. To their credit, they have taken on the case of aggressive adaptation.

Q: What else should our readers know about your organization?

A: Clean energy for electricity is part of creating resilient communities, but not all of it. We’re kind of circling back to the built environment because we know how to do that stuff. For instance, we know that mandatory is a bad word here, but want to figure out how to get net-zero energy homes to work in the marketplace instead of being a one-off thing. There has to be demand.

Q: Besides your work, what’s the “greenest” part of your life right now?

A: The net-zero house in Albemarle County that my husband, David Michaelson, and I moved into full time last year. We started designing it in 2012 to produce as much energy as it consumes.

Our walls and roof are beyond code for insulation because we used structural insulated panels.

Some of the other features we have are a 9-kilowatt rooftop solar system net-metered with Rappahannock Electric Cooperative, a geothermal HVAC system, LED light fixtures, energy-efficient fans, three-paned windows, a woodstove in the living room to offset HVAC needs and a cistern for rainwater storage under the front porch.