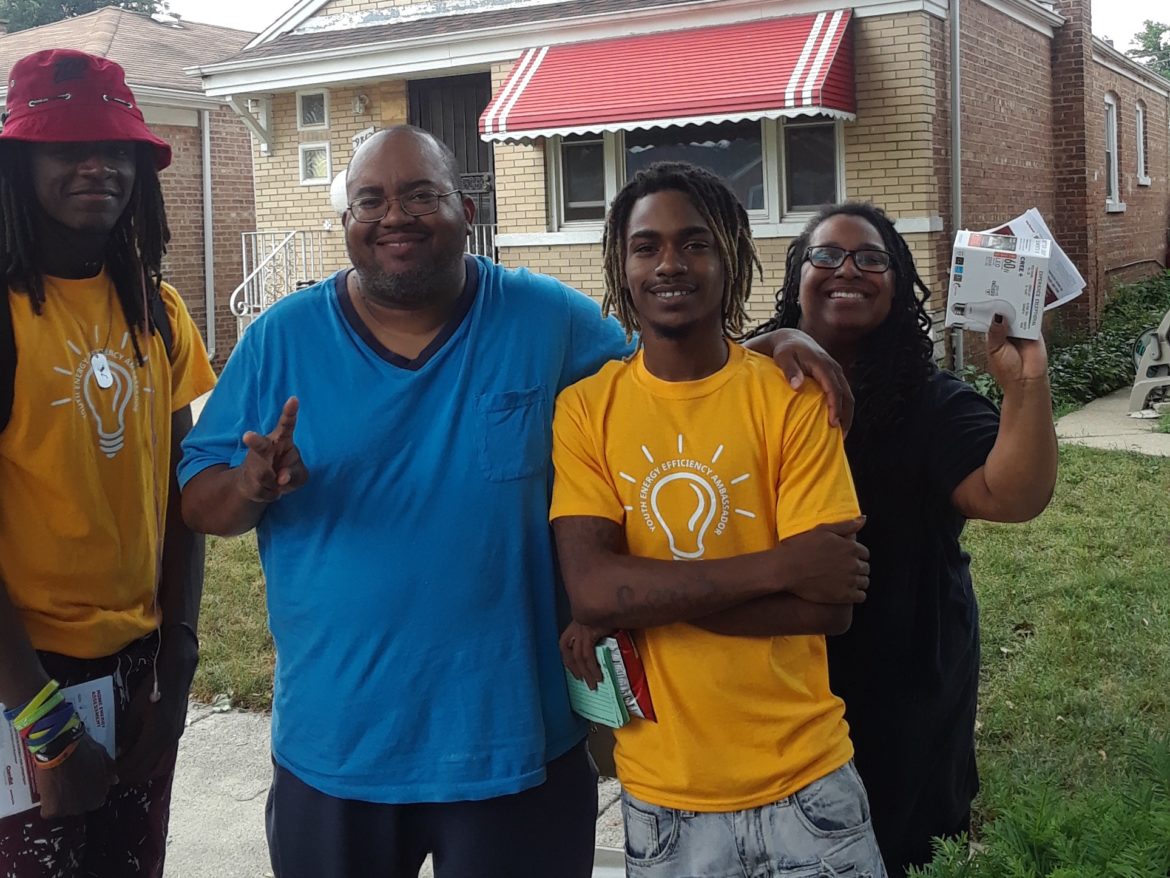 Youth ambassadors distribute information about energy efficiency at a South Side block party.

Organizers are looking to expand the program’s impact next year, particularly on the city’s South and West sides.

A nonprofit partnership that recently trained about two dozen Chicago youths to become energy efficiency “ambassadors” in their homes and communities is looking to expand its impact next year on the city’s South and West sides.

The program culminated with block parties in three South Side neighborhoods, where youth participants distributed energy-efficient devices and told residents about the benefits — especially when it comes to bill savings — of conserving energy. Participation varied in each part of the program, but administrators estimate the main cohort was about 25 young people.

The work was funded by the Illinois Science and Energy Innovation Foundation (ISEIF), which also provides funding for the Energy News Network’s Illinois smart grid reporting.

This year, with new ISEIF funding, program leaders hope to broaden the scope, both in content and participation.

“We’re hoping to be able to train students to become comfortable with energy and energy efficiency concepts” so they can act on those concepts outside the training, said Liz Wimmer, a program manager at the Illinois Green Alliance.

Wimmer led last summer’s classroom programs with a colleague, explaining to participants how power is generated and distributed before focusing on how students could save electricity in their own homes. They also covered smart grid technology like the smart electric meters that almost all Chicago electric customers have, as well as bill savings programs like hourly pricing.

Aside from connecting participants with professionals in the industry, the block parties were a big piece of the experience, since that was where the students took on an ambassadorial role themselves.

“Our hope was that the students would walk away feeling they were empowered,” Wimmer said.

Through three block parties, the nonprofits recorded 400 community members engaged in discussions about efficiency, 62 of whom actually signed pledges to take actions in their homes — for example, using LEDs or setting their thermostats to at least 75 degrees in the summer.

The youth ambassador program began after Wimmer and City Incite founder and president Aleta Garrett met at a 2017 gathering focused on youth and connected learning (in which educational programs give students access to mentors and professional opportunities). They wanted to figure out how to connect their organizations’ work. Illinois Green’s adult ambassador program was in its second year by then, and since many members of that program have an interest in community work in addition to their sustainability work, partnering with City Incite seemed like a natural fit.

After last year’s pilot, Wimmer and her colleagues want to bring the program to more students, especially on the South and West sides of Chicago, home to many of the city’s most underserved communities. They plan a semester-long program to begin in the new year in at least three city schools.

It’s part of Illinois Green’s strategic plan, which aims for the organization to engage with partners and community groups in all of Chicago’s 77 community areas. While the group’s members and volunteers are often professionally involved in sustainability work, administrators want to broaden its reach, especially to youth.

“Energy efficiency and renewable energy are two really important careers for young people to be considering,” Wimmer said, adding that given legislation passed in recent years, there’s “a lot of really good opportunity” for jobs in Illinois.

Wimmer and her colleagues are taking the fall to figure out how to improve the youth ambassador program. They’ve interviewed several Chicago teachers to narrow down how it would have to work to benefit students. Teachers will be able to apply, and it will be up to them whether they do in-class or after-school programs, Wimmer said.

As the program expands, the Illinois Green team also wants to create a more substantial final activity. One possibility is that participating schools would propose efficiency projects for their school or community, and then receive small “mini grants” from the organization to complete it.

City Incite is looking to improve the program for its own youth, too. The group’s programs serve young people 16 to 24 years old from Chicago’s South Side, many of whom have dropped out of high school. The programs assist them in getting jobs and apprenticeships, finishing high school and pursuing higher education opportunities. “Our ultimate goal is making sure our students are self-sufficient and rise above the poverty line,” Garrett said.

In one program, B.U.I.L.D., participants rehab a home in the community. While projects haven’t focused on efficiency in the past, the ambassador program with Illinois Green could be a perfect opportunity for the youth to get hands-on experience making homes energy efficient, Garrett said.

The classroom lessons are valuable to help students learn about efficiency, she said. But she added that having a practical, real-life application — installing a smart thermostat, for example, or seeing how home sealing can lead to lower energy use and, with it, lower bills — is important to drive the message home. “I think it’s just always important having an end goal.”

For Darrius Melton, who participated in the youth ambassador program, the green home visits were especially rewarding. Learning about rooftop solar panels, which the group discussed and which builders were planning to install, and seeing the way homeowners shaded their homes to keep heat out helped demonstrate to him alternative ways to save energy, he said.

Now 20, he finished his time in the B.U.I.L.D. program in August of 2018 and is currently in Ottumwa, Iowa, completing an associate’s degree in automotive technology at Indian Hills Community College. He said he’s learned about electricity in class there, and if he’d known more at the time of last year’s program, he might have asked more questions about the concepts he saw on the home tours and at the ComEd center.

For Melton’s family, just outside Chicago, the LEDs and power strips have helped them save money, he said. One of his main takeaways from the program that he could apply to his everyday life is “if it’s not in use, unplug it.”

“I think it was a great opportunity for young people to see beyond where their communities are and maybe look into the professional community and corporate community, and see how they could fit into that,” said Ted Krasnesky, who spoke on the career panel about his former role as manager of sustainable construction at Chicago-based Pepper construction company.

Students seemed most engaged when they were learning tangible actions to take to conserve energy and save money, said Tracy Murray, a former adult Energy Efficiency Ambassador with the Illinois Green Alliance. She spoke to the students about efficiency during the classroom workshop.

Murray, who previously worked for South Side Chicago Alderman Anthony Beale, said that in her experience, residents in that area often don’t know about efficiency and the measures they can take to save money on their bills. She’s planning to start her own outreach to local schools to help middle school students learn about energy efficiency. “I feel like if we reach them at that age, it’ll become a habit for them,” she said.