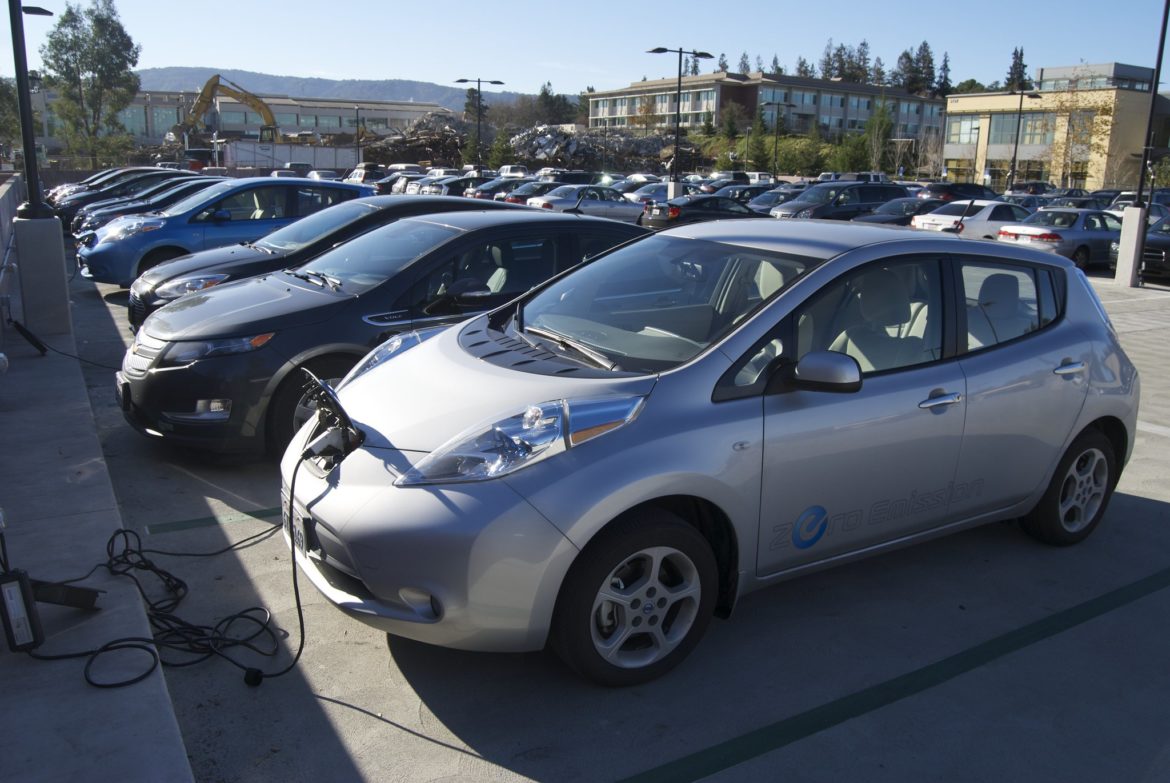 A row of electric vehicles charge in a parking lot.

A collaboration between a transportation startup, a utility company, and two local municipalities is testing a model the participants hope can help accelerate electric vehicle adoption in Massachusetts.

New Jersey-based Greenspot is installing public charging stations in Newton and Brookline, the company’s first municipal partnerships in the state. The partners in the project aim to make electric transportation more accessible, feasible and visible — helping normalize emissions-free options as part of the transportation mix.

“This is a way to help [cities] really enhance their transportation ecosystem,” said Rosie Lenoff, business development manager for Greenspot.

“There is a huge push to provide alternative methods of transportation that are more sustainable,” Lenoff said. “Right now transportation is a priority for municipal leaders throughout the commonwealth.”

In light of this trend, and similar movements in other states, Greenspot decided to expand its business model. In addition to its established practice of installing and maintaining electric vehicle charging stations for private customers, such as apartment buildings or co-working spaces, it would work with individual towns and cities to create “e-mobility hubs” — locations that combine charging stations for public use, electric vehicle car sharing, and, in some cases, electric scooter and bike rental.

Greenspot manages the installation and operation of these locations. It owns and operates the charging stations itself under an agreement with the town or city, and provides electric vehicle services through a third party company.

Though Greenspot has installed charging stations in New Jersey and Ohio, the partnerships with Newton and Brookline are the company’s first foray into Massachusetts. In Newton, charging locations will be installed in two municipal parking lots. A third location, in conjunction with a solar canopy project, is also in the works. In Brookline, five locations totalling 20 charging ports along Beacon Street, one of the town’s main thoroughfares, are planned.

A partnership like this, between a public entity and a private company, can make sense when the private party can offer resources, expertise or productivity the public partner is lacking, said John Donahue, a public policy lecturer at Harvard University’s Kennedy School of Government. These arrangements can help advance public policy goals — such as lowering carbon emissions — as long as the two parties don’t have divergent interests, he said. And, Donahue said, there is every reason to believe that climate change solutions are an area in which these partnerships can work.

“If people can’t make money going to a low-carbon future, we’re not going to get there,” he said. “The good news is, it looks like people can make money doing it.”

Greenspot’s model dovetails with a program underway at utility company Eversource. The utility has been operating a $45 million initiative to boost electric vehicle adoption by footing the bill for the infrastructure work — wires, conduits, trenches — needed to connect charging stations to the grid.

Much of the work within this program has been directly with private properties, but the utility has always remained open to other models to ensure it doesn’t miss any promising but unconventional opportunities, said electric vehicle infrastructure program lead James Cater.

By including a car-share component, Greenspot’s approach can reach more people, especially in urban areas where residents are more likely to rely on public transportation and walking, he said. The whole system can help advance the public’s general acceptance of electric vehicles, he said.

“You get people comfortable with seeing charging stations out in the field, lowering their range anxiety, and you free them up to think about their next car maybe being an [electric vehicle].”

The inclusion of a car-sharing component is a move in the right direction, said Larry Chretien, executive director of the Green Energy Consumers Alliance, a nonprofit that helps consumers in Massachusetts and Rhode Island learn more about and access renewable energy and energy efficiency solutions.

An electric car charged on a standard energy supply is responsible for about 75% less emissions than one with an internal combustion engine, Chretien said. And vehicles in a car-sharing fleet are often on the road many more hours in a day than a privately owned vehicle. Electrifying car-share vehicles, therefore, can amplify the impact, he said.

At the same time, however, the economics of successfully operating an electric car-share system are challenging, he noted. While filling up the tank takes just minutes, fully charging an electric vehicle can take hours — hours during which the vehicle is not available to be rented.

“We’d like to see more car-sharing and we’d like that to be electric, but connecting the two is hard,” Chretien said.

Greenspot is aware of this obstacle, Lenoff said. It requires any electric vehicles used in its projects to have a minimum range of 200 miles, to cut down on how often they need to be charged. The company is also making sure all of its charging stations are wired to allow for fast-charging stations — which can charge a vehicle to 80% capacity within 30 minutes — to be installed as it becomes necessary.

“The power will be there when demand calls for it,” Lenoff said. “We’ll be able to make that upgrade fairly quickly.”

Though it cannot reveal details quite yet, Greenspot is already in conversations with more towns in Massachusetts to provide similar services to those in Newton and Brookline. Eversource hopes to work with Greenspot again and is also in the early stages of speaking with other private companies about potential collaborations.

“We don’t have all the answers,” Cater said. “But in partnership with others we might come up with some creative solutions.”

Editor’s note: An earlier version of this article misstated the number of charging stations installed in Newton and Brookline. The headline has also been changed to clarify the status of car-sharing development.