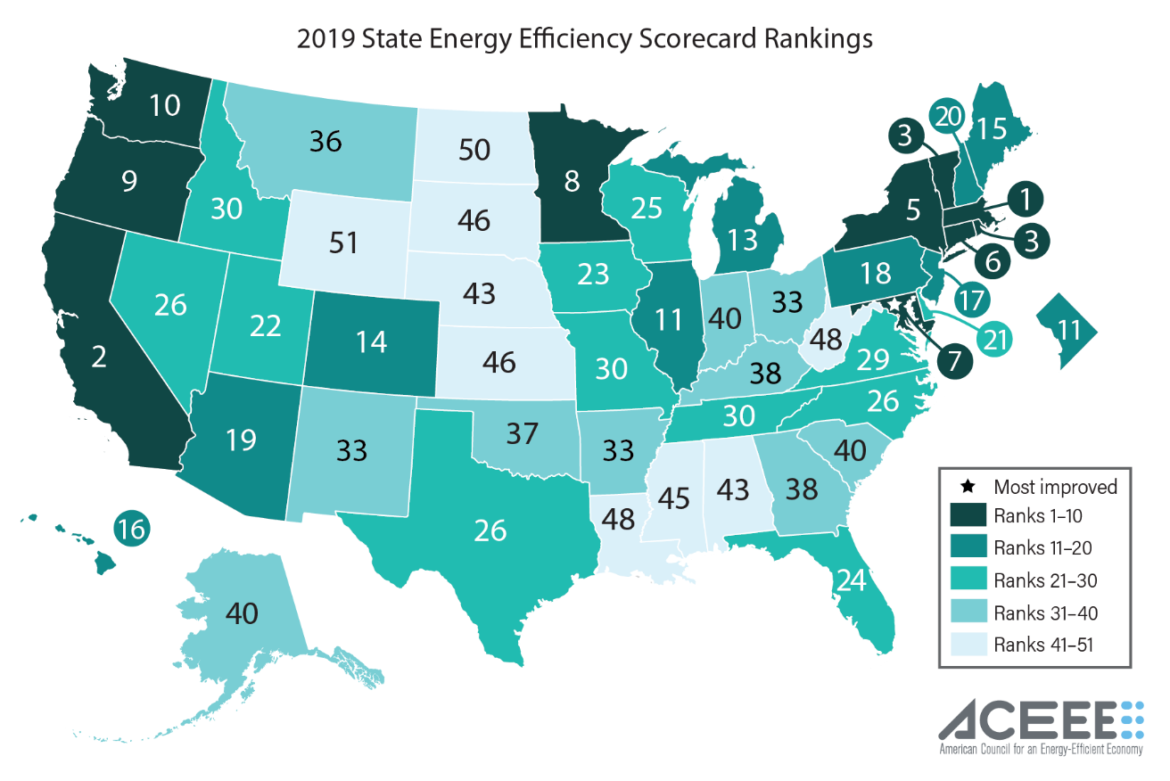 An energy efficiency advocacy group has further downgraded Ohio in its state rankings, thanks to a new law rolling back the state’s clean energy standards. Other experts are warning that ratepayers will soon feel the impacts more directly.

Ohio was in 33rd place among states and the District of Columbia in the latest rankings released on Oct. 1 by the American Council for an Energy-Efficient Economy, or ACEEE. The organization’s rankings consider 33 measures across six policy areas, including state clean energy standards and building codes. House Bill 6, a law better known for adding charges to ratepayers’ bills to subsidize nuclear and coal power, played a significant role in Ohio’s ranking this year.

“Certainly, HB 6 is one of the more damaging pieces of legislation we saw this year,” said Weston Berg, lead author for the report. ACEEE’s best practices call for states “having a stable, long-term energy efficiency resource standard,” he said.

In contrast, HB 6 first lowers the existing standard from 22% to 17.5% energy efficiency savings. Then once that level is met, utilities won’t have authority to charge for efficiency programs that will provide a net financial benefit for ratepayers.

HB 6 also expanded commercial and industrial opt-outs, reducing the total amount of energy efficiency called for under the law.

Ohio did get credit for what it accomplished on the energy efficiency front in 2018, before HB 6 was passed. Recent improvements to Ohio’s building code for new construction were also viewed as a positive sign in the analysis.

However, “barring any sort of change from whatever happens with the referendum, without really any programs in place, Ohio will continue to plummet in the scorecard,” Berg said.

This year’s results reflect a trend in which Ohio’s ranking has risen or fallen as state policies have changed. The state’s top ranking of 18th place came in 2013, five years into the implementation of the original energy efficiency standard enacted in 2008. Since then, the standards have been in a state of uncertainty and flux, leading to them being temporarily frozen, weakened and eventually gutted.

Impacts on the ground

The real-world impacts of HB 6 and the fall in rankings will show up on customers’ electric bills. Since its enactment in 2008, the standard required that utility programs produce more overall savings for customers than they cost.

“Prior to HB 6, Ohio was by statute ramping up to 2% from 1% energy savings from energy efficiency programs,” said Nick Hromalik, policy manager for the Midwest Energy Efficiency Alliance. “Unfortunately, under the new law, there is no certainty that there will be any energy efficiency programs after 2020. Which means that any investment that would have created energy savings for customers, and the related clean energy jobs, will be lost.

“Indiana and Michigan have seen their energy efficiency investment increase 25% and 41% respectively over the last five years,” he added. “Customers, small businesses and larger commercial and industrial companies will have the advantage of stable clean energy programs in neighboring states, while Ohio’s investment likely will not continue once HB 6 goes into effect.”

ACEEE has also estimated that energy efficiency could help Ohio save up to $1.6 billion in avoided health impacts from pollution.

Gutting the standard will also have some effect on the overall demand for electricity and the capacity portion of customers’ bills. Those indirect savings currently come to about $2 per month for the average Ohio ratepayer, according to an analysis done for the Ohio Environmental Council and the Environmental Law & Policy Center.

Companies in Ohio are already doing a significant amount of energy efficiency work, and many of those projects can still go ahead despite HB 6, said Aaron Kraus, a vice president at Greenworks Lending in Washington, D.C. The group specializes in C-PACE financing, which stands for Commercial Property Assessed Clean Energy.

Elimination of the standard could mean that customers will pay more for the total cost of a project, though, he said. Customers may also cancel or delay some energy efficiency projects that could otherwise save them money.

“What I’m concerned about are deals that are a little bit more on the bubble financially,” Kraus continued. Gutting the standard could affect the return that property owners see on their investment, leading them to cancel a project or make due with less efficient equipment until it absolutely needs replacing.

Supportive state policies “induce more projects to get done that wouldn’t otherwise get done or might be delayed,” Kraus said. “Bad policies just put the brakes on things, and that’s not beneficial to anyone.”