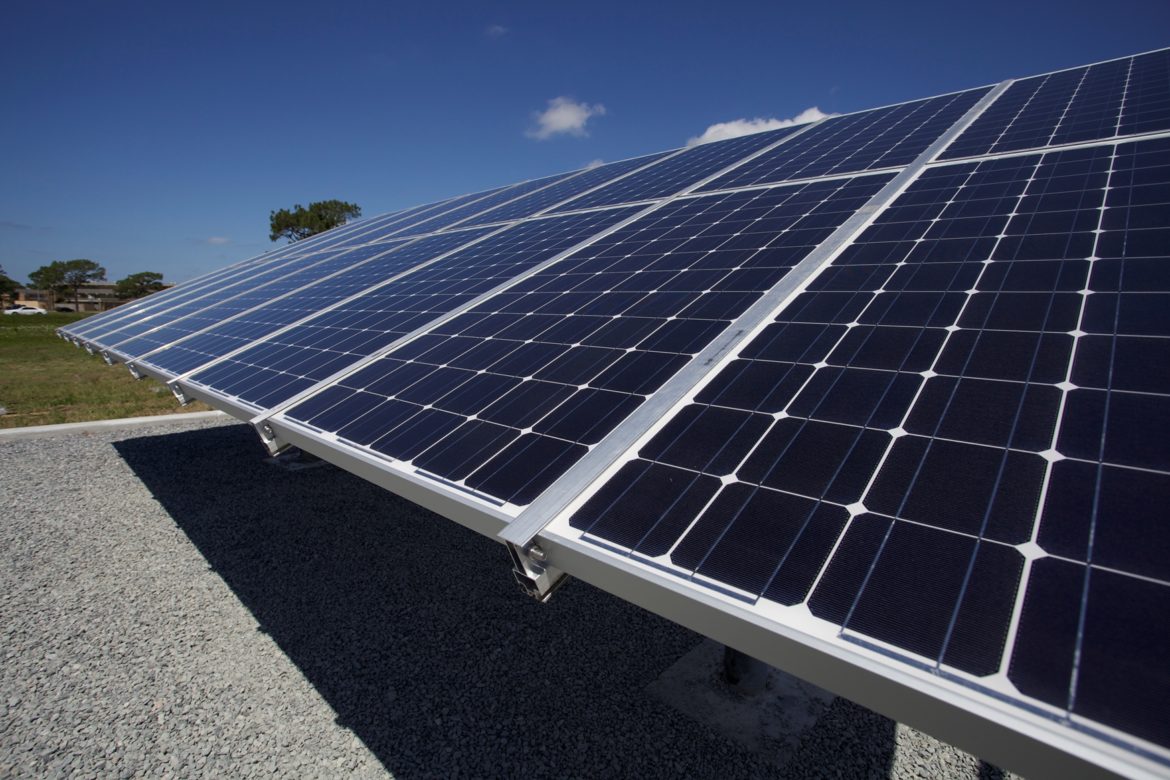 Clean energy advocates want Green Mountain Power to source more of its renewables from within Vermont.

Vermont’s biggest power utility is charging toward one of the nation’s most aggressive renewable energy targets: 100% by 2030.

More attention is needed, though, according to clean energy advocates, to make sure a bigger share of those renewables are “made in Vermont.”

Still, solar remains a small fraction of the utility’s fuel mix, with the vast majority of its renewable energy coming from power purchase agreements with large hydropower facilities in Québec. Hydro accounts for more than 60% of the utility’s overall supply. Advocates hope diversifying with more in-state renewables will bring resiliency and economic benefits.

“We do believe that GMP is working collaboratively with independent power producers and with Vermonters who want to generate their own renewable energy,” said Olivia Campbell Andersen, executive director of Renewable Energy Vermont, a nonprofit trade association. “But there’s certainly more work to be done.”

Those are some of the most aggressive targets of any utility in the country. And the path to meeting those goals, GMP said in its announcement, runs through “ramping up local distributed resources for generating and storing energy, ramping up purchases of carbon-free wind and hydro energy, all while making sure customers receive reliable, cost-effective services.”

Bringing more distributed resources and storage into the system will be critical to meeting those goals, said Josh Castonguay, the utility’s vice president and chief innovation officer. So far, he thinks the company is on track: “Overall, the in-state side of things is going really well.”

The numbers suggest GMP doesn’t have far to go to meet its targets. In December 2018, Green Mountain Power announced that its electricity was 90% carbon-free and over 60% renewable. But it’s not clear exactly how much of that power is locally sourced.

The utility reported in its 2018 integrated resource plan that it owned about 25 megawatts of solar capacity. In September, three new solar-plus-storage projects started sending power to the grid in northwestern Vermont that represent a significant increase to its in-state solar and renewable portfolios. The three systems in the towns of Ferrisburgh, Milton and Essex will add 14.4 MW of local solar generation and 6 MW of storage capacity to GMP’s power supply.

“This brings to eight the number of solar facilities of that scale that we own, but these three are the first with fully paired storage systems,” Castonguay said. Each project uses Tesla Powerpack battery systems, which help the utility dispatch power during times of peak load, reducing the need to run oil-fired generators when customer demand spikes.

Meanwhile, smaller-scale projects by homeowners and renewable energy developers are responsible for the bulk of the local power added to GMP’s supply each year. State net metering and standard offer programs provide incentives to boost the amount of renewable energy generated in Vermont.

The standard offer program aims to accelerate deployment of renewables in Vermont by ensuring developers of renewable energy projects up to 2.2 MW in size can get long-term, fixed-price contracts from utilities. The net metering program enables homeowners to generate renewable electricity and sell it to utilities. The programs add between 30 and 40 megawatts of new in-state resources per year to GMP’s portfolio, according to Castonguay.

“Both inside and outside these programs, in-state renewables have increased dramatically in the past decade,” said Margaret Cheney, one of the three members of the Public Utilities Commission, via email.

She notes that almost all of that new generation has been in the solar sector, and the majority of it has come via net-metering connections: applications through the net-metering program have surged from 925 in 2013 to 3,271 in 2018.

GMP is looking at tapping other resources beyond the steady stream of net-metered rooftop solar power sold by its customers. Other types of renewables, Castonguay notes, such as wind farms and methane digesters, have their own technical advantages. Wind turbines complement solar well, since they are a more reliable wintertime energy source. And methane digesters that produce biogas to fire onsite turbines can provide a steady stream of electricity throughout the year.

But they also pose particular challenges. Siting of wind farms in Vermont has become a controversial issue. Small-scale farm-based methane digesters have encountered a variety of hurdles, including steep up-front capital requirements and maintenance burdens for the farmers who own them.

Much of the impetus for GMP’s in-state push comes from Vermont’s Renewable Energy Standard, passed in 2015. Under the “Tier II” provision of the standard, utilities must source a certain amount of power from grid-connected renewable energy generators smaller than 5 MW in capacity. This year, the requirement is pegged at 2.4% of utilities’ retail electricity sales; by 2032, that share rises to 10%.

“We want to make sure we meet and exceed those Tier II requirements,” Castonguay said. “We haven’t set a specific goal, but we’re looking at how do we accelerate to go above and beyond that, in a way that’s cost-beneficial to all our customers.”

The motivation for increasing in-state renewable generation includes economics and resilience. GMP says the Ferrisburgh, Milton and Essex systems will reduce line losses and other transmission costs and improve reliability, with the potential to become islanded microgrids in the future.

“It can pay for itself by reducing peaks,” Castonguay said. “It can be a tool to manage voltage in distribution system and provide emergency power to customers. And it can decarbonize the grid as we reduce the amount of peak energy that comes from oil-fired units in New England.”

“GMP has spent tens of millions responding to increased extreme weather events. If we don’t increase our resilience with local renewables and energy storage and a smart grid, it’s costing us now and will cost us more in the future,” Campbell Andersen said.

There are security risks, too, she said, in relying too much on imported electricity transported on transmission lines that could be damaged.

“Transforming from a centralized to a decentralized, diversified, local-based energy system not only will save us money but increase community resilience and grow local jobs.”

The amount of distributed solar being added to the grid each year, however, is actually slowing as regulators have reduced net metering rates.

Renewable Energy Vermont has been critical of changes made by the Public Utilities Commission that limit participation in net metering, slowing down the construction of community solar arrays and parking lot solar canopies.

“We really see the regulators as a barrier to achieving the larger in-state commitment,” Campbell Andersen said. “In the end, I think this is the biggest obstacle to increasing local renewable electricity generation and energy self-reliance in Vermont. The regulators are interpreting that 10% as a ceiling rather than a floor.”