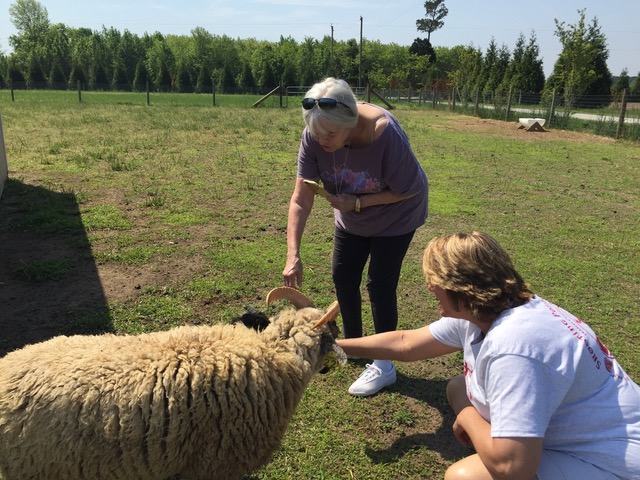 The Van Kesteren family would deploy Hog Island sheep, a rare breed of livestock, to graze on its planned solar farm. Their “starter flock” would come from an adjacent county on the Eastern Shore.

An Eastern Shore farming family is frustrated that its solar project is at the mercy of the local utility and grid operator.

A family of farmers figured its innovative endeavor to graze heirloom sheep on their proposed 20-megawatt solar project would be warmly embraced by the same Eastern Shore jurisdiction that first ushered utility-scale sun power into Virginia three years ago.

Instead, they’ve received the cold shoulder — not from accommodating county and state officials, but from the local utility and the regional transmission organization.

Old Dominion (ODEC), the generation cooperative that serves 11 area distribution co-ops, has thus far said no to purchasing even a portion of the project’s energy. Accomack & Northampton (A&N), the distribution co-op serving both of Virginia’s Eastern Shore counties, has followed suit.

Meanwhile, by February 2018, the cost for SunTec to upgrade and interconnect to the regional grid rose more than six-fold from the original estimate of $3 million to $4 million in March 2017.

The latter estimate of up to $26.5 million also included costs to add fiber optic cable for broadband services.

Both of those figures came from PJM, the transmission organization that coordinates the movement of wholesale electricity in Virginia, Maryland, Delaware, 10 other states and the District of Columbia.

Dennis Nordstrom is a retired energy sector attorney who married into the Van Kesteren family. He’s the main driver behind the creation of SunTec and has helped to line up private investors to fund the independent power production project.

“That $4 million was a number we could handle,” Nordstrom said. “We understand the need to pay for a direct connection to the grid, but the system upgrade costs are crippling.

“Our little project cannot afford that type of cost,” he said about the $26.5 million price tag. “It would have doubled our capital costs. We felt like this is stacked against the little guy because utilities are not willing to invest in infrastructure.”

“In this case, I imagine it comes down to economics for the co-op,” he said about A&N and ODEC. “A co-op looks at its generation portfolio to see what it’s paying now and what that cost will be in 10, 15 or 20 years and compares that to solar costs.”

Solar developers in the mid-Atlantic region are at the mercy of the utility and PJM, he said, adding that transmission capacity varies so widely that they usually have to seek multiple sites before locating one that meshes with utilities’ needs.

Butch Williamson, A&N’s executive director for three years, said decisions about adding solar do indeed boil down to its price per kilowatt-hour and the drawbacks of it not being available 24/7.

In 2018, solar and wind made up 6% of Old Dominion’s generation portfolio. Williamson expects the utility will integrate more renewables as battery storage technology advances.

“Solar is the energy of the future, but we have to be smart about it,” he said. “I’d like us to be environmentally friendly, but I’m not going to go out and buy solar and arbitrarily charge customers for it. In a few years, there will probably be a bidding war for renewables.”

Solar first entered the Van Kesteren family lexicon close to a decade ago due to conversations with Community Energy, which was exploring suitable farmland options in Accomack County for a large-scale solar installation.

Ultimately, the Pennsylvania-based solar developer decided sites north of Tasley were more appropriate for what debuted as Virginia’s first utility-scale solar operation in October 2016. Dominion Energy, the state’s largest utility, purchased the 80-megawatt project to supply green energy for Amazon. Its 300,000 panels cover separate pieces of land that add up to 900 acres.

Instead of pouting about their loss, the Van Kesterens created SunTec to capitalize on two of the Eastern Shore’s most abundant resources — sunshine and agricultural land.

“The Amazon project set a great precedent,” Nordstrom said. “We figured maybe we could bring in some investors and do this ourselves.”

Before California rerouted western waterways to create cropland via irrigation, Accomack County had a reputation as the nation’s breadbasket, explained John Van Kesteren, who owns the Tasley farm with three siblings.

At peak operation, they owned and leased some 2,200 acres, becoming the spinach kings of the county. That tapered off in 2002 when they retired. They now lease the 900 acres they own to other farmers.

Until then, Van Kesterens had farmed on the Eastern Shore for four generations. John’s father — who immigrated to New York with his family as a child from a farm in Holland before World War I — eventually ended up in Virginia in 1938.

“We have a longer growing season and the sandy, loamy soil is really ideal,” Van Kesteren said about the potatoes, cabbage, tomatoes, beets, carrots, onions and other vegetables shipped first via ports and then in railroad cars and trucks.

Less labor-intensive crops such as corn, soybeans and grains now dominate the landscape.

“It’s a no-brainer for me,” Van Kesteren said about the pursuit of solar by Nordstrom, his son-in-law. “It’s like preserving the land for later production and it’s a way for farms to diversify. Plus, we would welcome the steady stream of income on some of our land.”

Nordstrom researched a network of family farms across North Carolina that paired solar panels and sheep — Sun-Raised Farms — and figured he could experiment in Virginia. Sheep not only clip the grass, but can also seek shade under the panels.

Renewable energy and agriculture don’t have to be pitted against one another because it’s not an either-or scenario, he said.

Owners of the Shooting Point Oyster Company in adjacent Northampton County have a ready supply of rare Hog Island sheep that will serve as the “starter flock” at SunTec.

The Livestock Conservancy has listed the breed’s status as critical because so few Hog Island sheep are left. Colonists from England introduced sheep to the Eastern Shore island in the early 1700s. However, flocks were left behind after a 1933 hurricane left the island uninhabitable by humans.

A conservation organization that purchased the island in the 1970s rounded up the sheep as part of a habitat restoration project. The sheep, which became feral in the interim, have been domesticated on the mainland. Farmers praise them as a hardy and low-maintenance breed capable of surviving on a limited diet with little medical intervention.

“It’s not rocket science,” Nordstrom said, about maintaining a flock of 200 or so sheep. “We would have a paddock, fencing and a gate so we can let them in and out. What’s great about sheep is that they don’t go around gnawing on electrical wires.”

In January, the Accomack County Board of Supervisors voted unanimously to grant SunTec a two-year extension to begin construction on its solar project.

Ron Wolff, who has served on the board for 16 years, said he and his fellow supervisors said they were sympathetic to setbacks the Van Kesterens were experiencing and supported the family’s effort to keep its farm by diversifying.

“Basically, what they would be doing is letting the sheep mow the grass,” Wolff said.

It is not lost on SunTec supporters that Gov. Ralph Northam grew up in Accomack County. The Democrat was instrumental in convincing a Republican-majority General Assembly to pass landmark legislation calling for utilities to invest in 5,000 MW of renewables by 2028.

And just last month, Northam signed an executive order requiring the state to deliver 100% clean energy on its grid by 2050.

“The state and county have not been the problems with our project,” Nordstrom said. “The board gave us that two-year extension with hopes that the utilities would make improvements to the grid.”

Until somebody “takes the brave step to enhance the grid,” Nordstrom said, renewable energy projects such as his will likely be stymied.

As he understands, the northward power transmission route to and through Delaware is notoriously congested, but is PJM’s preferred direction for electrons that would otherwise remain trapped on the Eastern Shore.

What “really stuck in his craw,” he said, was Hecate Energy LLC receiving a permit in 2016 to build a 20-megawatt solar farm in Northampton County, just south of Accomack County. The plan called for interconnecting with A&N and Old Dominion electric co-ops. Dominion Energy purchased the facility in 2017.

SunTec, which had entered the PJM queue for review and interconnection in mid-2016, dropped out of the queue last year to avoid paying substantial additional sums for yet another report.

The process is so uncertain and lengthy, Nordstrom said, that it would “give anyone pause as to whether to continue to invest in projects knowing that the results of earlier studies could be so wrong.”

As the family waits for a breakthrough, SunTec is doing enough with the project to keep its permits active.

“This is one of the poorest parts of the state,” Nordstrom said, alluding to the construction and installation jobs attached to large-scale solar.

“If you want to help the Eastern Shore, then help it to be a clean-energy producer. Solar seems like a no-brainer.”