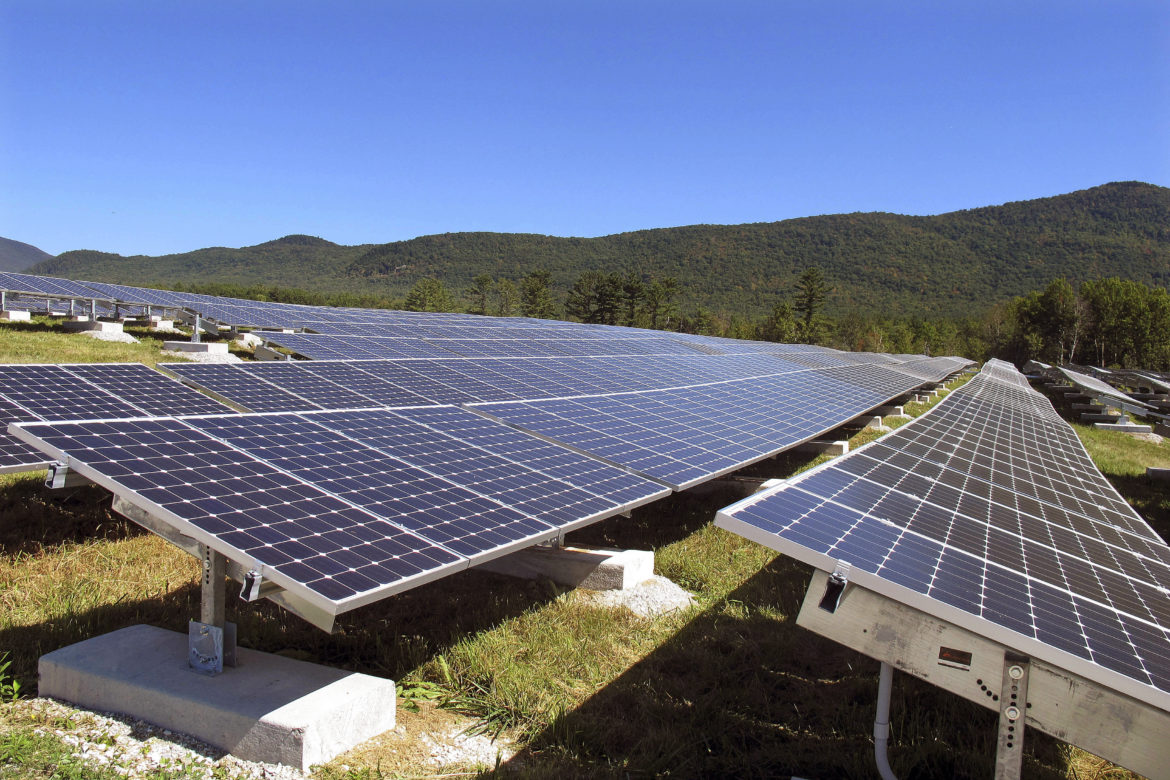 A solar array near Rutland, Vermont.

New England’s six states are falling short of the low-carbon energy deployment needed to reach their shared 2050 climate goals, according to a new analysis from the Brattle Group.

By midcentury, every state in New England aims to cut greenhouse gas emissions by at least 80% over 1990 levels.

At the behest of the Coalition for Community Solar Access, a solar trade association, Brattle looked late last month at how much clean energy would be needed to meet those goals, if the region engaged in a mass switch from fossil fuel sources to electricity.

Demand for electricity would roughly double by 2050, despite efficiency measures — about the same amount as for the nation at large, if it were to follow a similar path, the consultancy said.

To supply that power, about four to eight times more renewables would need to come online annually, across the 2020s, than what is currently planned for the region.

Currently, planned low-carbon generation would reach about 830 megawatts of power annually through 2030. That compares with the 4 to 7 gigawatts per year on average needed through 2050 to meet the climate targets.

“If we keep growing renewable industries at a similar pace, I think we’ll be good,” said Weiss.

Commitments in Massachusetts, Connecticut, Rhode Island and others to buy 1,500 MW of power from offshore wind farms that have yet to be built, for instance, have given rise to an industry in a short amount of time.

But policymakers and the public largely don’t realize that rapid preparations would need to continue over several decades if states undertake the “electrification of everything,” the report said.

“And if their mindset is, ‘How can we be building so much stuff?’ then we could risk falling short,” added Weiss.

Brattle didn’t consider a possible role for next-generation nuclear and carbon capture, among other technologies seen as crucial for deep emissions cuts in some corners of the energy policy world.

Under its three scenarios, building owners would ditch natural gas and oil in favor of electric pumps for their heating and cooling, while the market for new cars, trucks and buses would turn definitively toward batteries and hydrogen propulsion. In one scenario, renewably produced gas could be stored and used for building heat or electricity production, too.

Hydroelectric imports from Quebec, onshore wind in Maine and offshore wind off several states would require additional transmission. Projects would have to secure permits, possibly over local opposition.

The region’s plans for offshore wind have already encountered objections from the fishing industry, which has helped delay what would be the first utility-scale project in the country in waters near Massachusetts.

Annie Hawkins, executive director of the Responsible Offshore Development Alliance, which represents fishing groups, questioned how much dedicated space would be necessary for states to reach even their near-term targets for offshore wind.

“[I]t would be really important to see how much area it would take in order to have a concept of what the total impacts to fishing would be,” she wrote in an email to E&E News.

Overall, annual additions of clean energy would need to grow by roughly 9% per year through 2050, according to the Brattle analysis.

After that date, demand for electricity would level off.

But if New England’s build-out of renewable power sources were to slack off over the 2020s, said Weiss, the region might have to overbuild as 2050 approached, potentially creating a boom and bust for clean energy workers.

“If we delay and don’t ramp up, then soon the window will close in a way where we can do this in an orderly fashion,” he said.