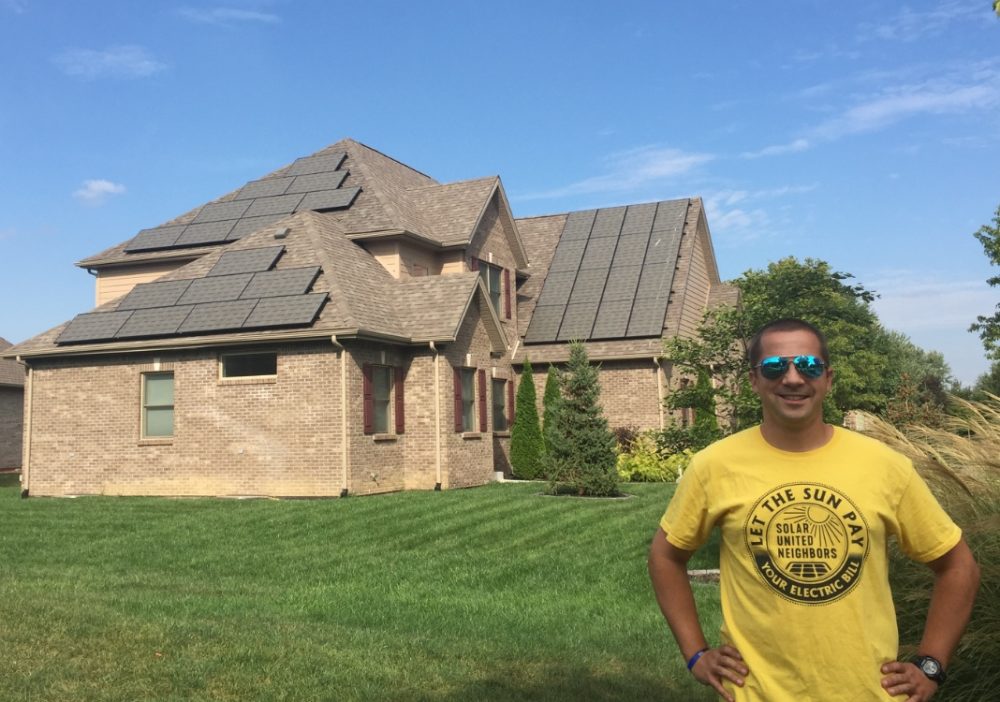 Joey Myles and his "dream house," in an upscale Indianapolis development.

After the local homeowners association rejected his proposal, Joey Myles became a solar advocate at the state legislature.

When Joey Myles started building his “dream house” in an upscale Indianapolis development five years ago, he figured solar panels were “a no-brainer.”

Two years later, as the house was about half done, Myles got a rude awakening.  The Franklin Trace homeowners association covenant said solar panels needed to be approved by the architectural control committee, but he assumed it was just a “box to check.” The committee rejected his proposal, however, because it did not “fit the aesthetic expectation of the community,” as stated in a letter from the property manager on behalf of the homeowners association.

“I guess I was naive, I thought — in this day and age, who would be against it?” said Myles, an auditor for the Department of Defense.

After several months of back and forth, the committee agreed to let Myles put solar panels on parts of the north and west sides of his roof — not visible from the street, but also less exposed to the sun. Missing out on the energy he could have generated with south-facing or more west-facing panels grated on Myles.

Around that time, advocates were pushing a bill in the state legislature to forbid homeowners associations from unreasonably blocking solar or requiring the removal of solar panels. At least 25 states have such solar access laws. But the proposal died in Indiana, where the group Solar United Neighbors estimates that in central Indiana alone, 400 homeowners associations have policies inhibiting solar.

Myles became an advocate, and got involved in the push for a bill the following legislative session. And he canvassed his neighbors to get support for putting solar on other parts of his roof. Almost two-thirds of the homeowners association’s 93 members agreed to a special meeting to consider the proposal, Myles said. A meeting was held but no resolution was reached, so an attorney working with Myles drafted a specific proposal and called for a second special meeting; the association board did not respond, Myles said.

Ultimately a ballot was sent to members offering three mixes of solar shingles and panels; the option that would allow Myles to install more panels got more votes but not the 51% needed to change the group’s policy.

The homeowners association board president did not respond to a request for comment.

“They were looking for every single thing they could do to avoid approving this,” Myles said.

In early 2018, the Indiana state Senate voted 36-12 to approve a bill that would prevent homeowners associations from putting unreasonable prohibitions on solar panels, including any requirements that reduced panels’ efficiency or raised the cost more than 10%. The bill allowed the groups to require pre-approval for panels’ location and compliance with screening requirements. The bill was blocked by House Republicans and died. Then in 2019, the bill (HB 1331) passed both the state House and Senate but never advanced from conference.

Then in October 2018, as Myles tells it, a neighbor on the HOA board suggested Myles look into Sistine Solar, a Massachusetts-based company that makes films called SolarSkin to coat solar panels in images, whether to turn them into colorful works of art or to make them better blend in with the roof.

Myles reached out and “within 36 hours I had information from them, with drawings and everything.”

Sistine’s SolarSkin could disguise solar panels on Myles’ roof so that they looked like the roof’s asphalt shingles. Sistine Solar CEO and co-founder Senthil Balasubramanian described the technology as similar to the ads on bus windows. “SolarSkins use selective light filtration to let light pass through to the underlying module and a smaller amount of light to reflect back,” Balasubramanian said. “The innovation lies in the high amount of light passing through the module.”

When Myles offered to disguise solar panels with SolarSkin, the homeowners association finally decided to allow them on the visible parts of the west side of his roof. The skins mean some sacrifice in generation, with the panels generating about 85% as much as they would without skins.

But still Myles was thrilled to be able to move his panels, a project he did in August, and says he’s generating about 50% more electricity than before.

While Myles is the first Sistine Solar customer in Indiana, Balasubramanian said he’s had many other residential customers in California and the Northeast use the skins to alleviate concerns from homeowners associations. He said homeowners have also asked about SolarSkins with American flags or their favorite sports team’s logo, while corporations and nonprofit institutions tend to “be very expressive and use it for branding or advertising.”

A sense of mission

Balasubramanian said he founded the company out of frustration with the low level of solar penetration in the U.S., drawing on inspiration from “examples like Tesla and Apple, companies that have shown when you have a project that’s not just well-engineered but beautifully designed, it captures the hearts and minds of consumers. I thought, let’s use aesthetics to make solar strike an emotional chord with the consumers.”

In Texas, for example, an artist used SolarSkin to turn a ground-mounted solar panel into a work of art celebrating monarch butterflies’ migration from Mexico.

Sistine Solar won a million-dollar grant from the Department of Energy’s SunShot incubator program in 2015, helping the company to hone the technology, including with testing at the National Renewable Energy Lab and in Florida and Arizona, to make sure it could withstand extreme weather. Sistine Solar now has customers in at least nine states: Massachusetts, New York, New Jersey, California, South Carolina, Texas, South Dakota, Virginia and Indiana.

This week the Chicago-based Energy Foundry venture capital platform announced a $3.2 million investment in Sistine Solar, in conjunction with the Massachusetts Clean Energy Center and Thin LineCapital. Balasubramanian expects the funding will help him expand in the Midwest and nationally.

“They’re ready to scale up, they’ve had installations to prove it works — they’ve run the right third-party tests to verify the durability and effectiveness, the ability for solar panels to generate energy with the SolarSkin on it,” said Energy Foundry investment associate Judy Li.

As solar becomes more mainstream, Li said, “it makes sense that a lot of the people who are considering solar today or might consider solar tomorrow might have an aversion to the way solar panels look. … We need products like SolarSkin that are affordable and also easy to integrate into today’s solar installation process.”

Li and Balasubramanian said they know of no products equivalent to SolarSkin on the market. Balasubramanian said the closest competitor is Tesla’s Solar Roof, wherein glass tiles actually generate energy. But getting a Solar Roof is a much bigger and more expensive undertaking than placing a film on an existing solar installation, with no structural impact on the roof. During the debate over Myles’ request, the Franklin Trace homeowners association found that Tesla roofs would cost tens of thousands of dollars more for homes in the neighborhood.

While Myles previously saw solar as just a “common sense” part of any new home, now he is an evangelist for solar power and an active volunteer with Solarize Indiana. He plans to be heavily involved in efforts to pass the HOA solar bill in the legislature in 2020.

“If my HOA had approved me to put my solar panels where I wanted them originally in 2016, I would never have known anything about clean energy [advocacy], never gotten involved with politics, with the legislature,” Myles said. “It’s not just about me, it’s about fighting the good fight for everyone else.”