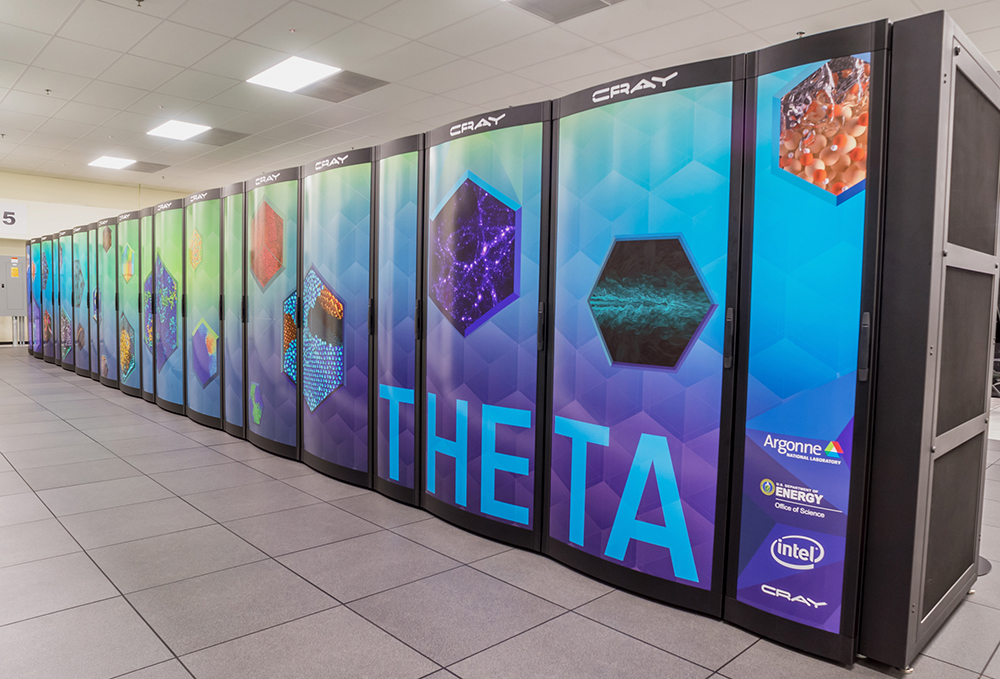 The Argonne National Laboratory is home to some of the most powerful supercomputers in the world, including the Theta supercomputer at the Argonne Leadership Computing Facility.

A Chicago-area nuclear engineer is among those using supercomputers to test possible advanced reactor designs.

While Illinois’ nuclear power plants have relied on supports in the Future Energy Jobs Act and may need future subsidies to remain open, some experts believe smaller, advanced nuclear reactors will provide a financially viable source of carbon-free energy in the future — while also producing less nuclear waste more safely than current reactors.

Emily Shemon, a nuclear engineer at the U.S. Department of Energy’s Argonne National Laboratory outside Chicago, spends her days running a supercomputer to help determine what advanced nuclear reactor designs might work. Shemon focuses specifically on multiphysics aspects of sodium-cooled fast reactors, while colleagues in the Nuclear Science and Engineering Division at Argonne work on other types of advanced nuclear reactors, like those cooled by gas or molten salts.

An article circulated by Argonne notes that “sodium-cooled fast reactors also have a considerable inherent advantage: there are several built-in safety measures that kick in automatically even in cases when the reactor systems fail. As coolant flows around a bundle of fuel pins in the reactor core, it carries heat away from the fuel assembly. Heated sodium tends to float on top of cooler sodium, creating a lava lamp-like circulation pattern that prevents any one area from getting too hot.”

With some of the most powerful computers in the world, Argonne plays a crucial role in helping scientists hone in on what designs might work so they can better tailor the expensive and time-consuming real-life experimentation phase of different technologies. The Energy News Network talked with Shemon about her career and her thoughts on nuclear’s role in a clean energy shift. The conversation has been lightly edited for clarity.

Q: What role does your work on the supercomputer play in developing advanced nuclear reactors?

A: We’re in the beginning years of performing these high fidelity calculations. To get their design licensed, [industry] do need to perform experiments. If they are able to perform simulations in advance or in conjunction, we believe it could really streamline the time frame for coming down to that final design, which is optimal. You don’t want to have to run an experiment for every possible design; you want to refine that with simulations first — “It looks good on my computer, let me go ahead and test this out.”

Nuclear reactor modeling codes have been around for decades, since the 1950s, but those computing resources were very limited compared to what we have today. They had to make a lot of approximations in their models. Now that we have these supercomputers available to us, we don’t need to make those approximations. We’re actually modeling geometries in very high fidelity. Particularly for reactor designs that are novel, these older codes that smudge things around in order to run on lower computing resources — we don’t know how accurate those codes will be for new reactor designs.

Q: Do you think nuclear will play a major role in shifting to a lower-carbon or carbon-free energy system?

A: The numbers are pretty clear that nuclear energy is one of the only alternative energy sources that is clean and capable of providing the quantity, the sheer quantity of energy we need if we’re going to remove some of these high carbon-producing energy sources. I don’t think we’ll see a future where we’re carbon neutral or carbon free that doesn’t include nuclear energy. The nuclear reactors just take up so little room and are so energy dense and don’t release any carbon and produce a very small amount of waste compared to most other energy sources. The main reason people are concerned is the questions about the waste, which is certainly a question that needs to be addressed. But the technology to address that question does exist — it’s a matter of policy and moving forward with these new reactors.

Q: What do you say to concerns about waste and economic viability that have long been raised by the current fleet of reactors?

A: [Some of the reactor designs being proposed today] are fundamentally different than the current reactor fleet. If you look at the number of companies proposing these innovative designs, it’s encouraging to see. Companies wouldn’t be getting into it if they didn’t think there was a possibility [for success]. Numerous startups are moving forward … trying to address major issues we have currently. One of the main complaints is that they produce waste and we don’t have a place to put that waste currently.  Some of these advanced designs are able to actually reduce that waste and close the nuclear fuel cycle by removing waste from a reactor and putting it into an advanced reactor with more processing.

There are very small reactor designs being proposed, small modular and micro reactors. They are less expensive to build because they are smaller. It reduces a lot of the financial risk to a company.

Q: Who has access to the modeling you are doing? Is it available to any company or government researcher?

A: We have different partnerships with industry … the goal is to make tools available to any industry customer.

Also, the Department of Energy certainly does have advanced reactor design programs, [such as the program to design the Versatile Test Reactor, a sodium-cooled fast reactor design] which they’re hoping to build in the next several years. It’s a double target: We want our tools to be useful for any kind of advanced nuclear design, and whoever wants to build these things, we’re trying to identify what physics needs they have, why existing modeling and simulation tools are not meeting those needs and developing the tools to actually probe deeper into their designs as they see fit.

For more traditional reactor designs, legacy tools are often adequate and use very low intensity computational resources. [For new designs], as you try to hone in, you may want to take a deeper look at, say, temperature distribution in a particular part of the assembly. That’s where high fidelity modeling comes in.

Q: How did you get into the field?

A: I’m from Michigan, I went to University of Michigan, and as a sophomore in college as an undecided engineering major, I took an intro class in nuclear engineering on a whim. It was the year of Sept. 11, and also the anthrax attacks. Our professor described how the federal mailing system was implementing irradiation of mail to kill off anthrax. I thought it was pretty fascinating there was this innovative solution that could destroy the bacteria or virus and not the mail itself. I got interested in where radiation comes from, and found out there are so many positive uses of radiation — it’s not just for bombs, but power plants, nuclear medicine. There are so many areas where nuclear physics can be positively contributing to society. So I took some more classes and ended in up in this niche field, with this untapped technology that has so many uses.

Q: In such a male-dominated field, do you feel like a role model or groundbreaker?

A: There aren’t that many female faces in the field. I have had positive experiences being a woman in the field, and I’ve tried to encourage other women to follow their interests in science and engineering and not be concerned with the fact that you may be the only one in your field.

Clarification: A previous version of this article included a photo of a supercomputer no longer located at the Argonne National Laboratory.