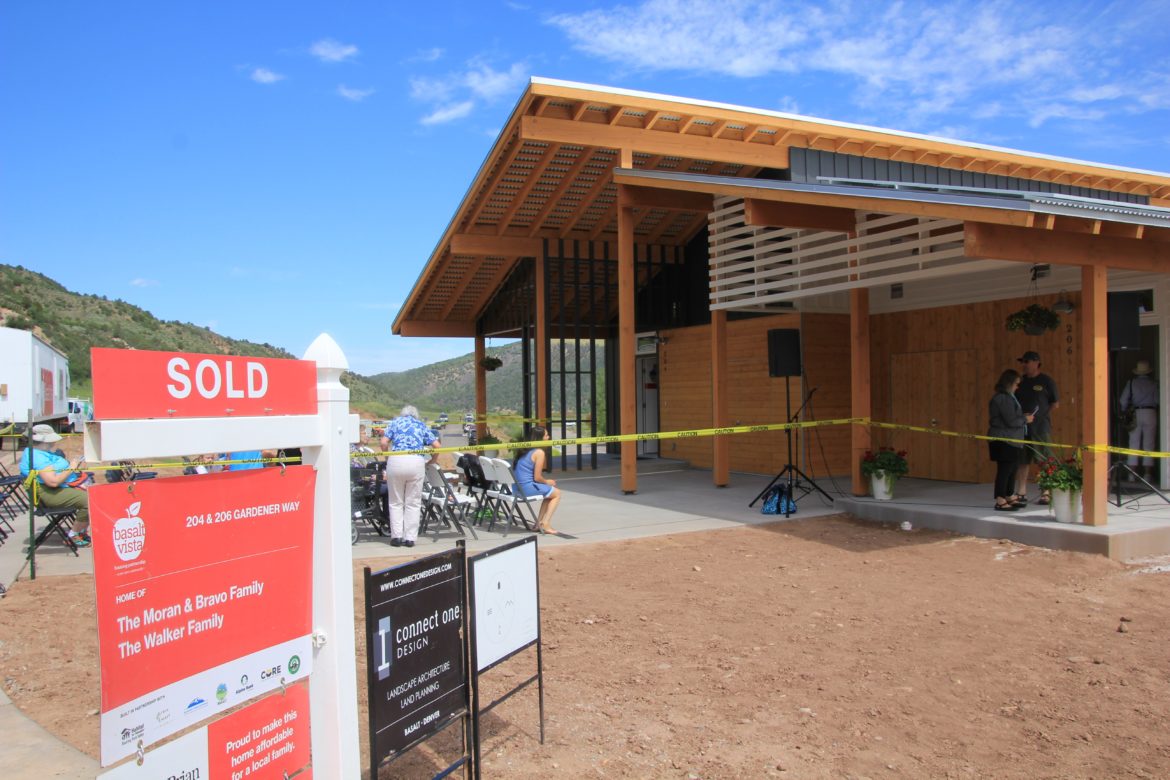 Fourteen of the 27 units at the Basalt Vista housing complex will be available for purchase by employees of the local Roaring Fork School District, which provided the land adjacent to Basalt High School.

The Basalt Vista housing project eschews natural gas as the state looks to reduce emissions from the building sector.

Huddled in a construction trailer last year, a team overseeing development of an affordable housing complex in the Colorado mountain town of Basalt agreed to make a bold statement about future energy use.

No natural gas lines were to be laid through the red soil to Basalt Vista, an affordable housing project. Electricity instead fuels kitchen stoves and delivers hot showers. Electricity, not gas, warms chilled autumn air. All units also have charging equipment for electric cars.

Beneficial electrification, the concept in play, has been defined as the application of electricity to end uses that would otherwise consume fossil fuels. That includes both transportation but also buildings. The U.S. Energy Information Administration says residential and commercial buildings sectors account for about 40% of total U.S. energy consumption.

Basalt Vista serves as a demonstration of building electrification but also as a living laboratory with national implications. New technology designed in a partnership with the National Renewable Energy Laboratory allows homeowners greater decision-making in energy allocations. Holy Cross Energy, the local electrical utility, also has been using the all-electric units to understand implications for its operation as it shifts toward increased renewables. The co-op expects to be at 70% renewable by 2021 and has ambitions to go higher.

While multiple California cities are considering bans on new natural gas connections, building electrification remains an infant concept. Natural gas remains the go-to fuel source for heating and other purposes in new construction in most places. In Colorado, legislators and other state officials have begun considering how to reduce use of natural gas as they plan how to achieve the goal adopted earlier this year of 90% reduction in economy-wide carbon emissions below 2005 levels by 2040.

Existing buildings pose a major challenge, as they often cannot be readily reconfigured. But even new construction in Colorado’s colder climate zones will test the application of existing technology. Basalt Vista, located 18 miles down-valley from Aspen, ranks at the edge.

Grading of the site had begun in June 2018 when Auden Schendler, a member of the Basalt Town Council and also vice president of sustainability for the Aspen Skiing Co., made his case for electrification of the units. The concept, a crucial strategy for solving the challenge of climate change, needed to be demonstrated, he told the development partners.

A year after that construction trailer huddle, the first duplex had been completed. “This is my house!” 13-year-old Isabel “Izzy” Walker beamed at the grand opening as she led her grandfather by the hand.

Her mother teaches preschool in the local Roaring Fork School District, which provided the land adjacent to Basalt High School. Of the 27 units, 14 will be available for purchase by school district employees. Employees within Pitkin County will have dibs on the other 13 units based on a lottery and subject to income restrictions. Completion is expected by early 2021.

As for saving money, Schendler’s second motivation, the first electric bills for summer came in at $12.65 and then $12.61. Habitat for Humanity Roaring Fork, the developer, projects Basalt Vista homeowners can expect annual savings of $2,000 in utility costs.

Like much of the affordable housing in the Aspen area, Basalt Vista is heavily subsidized, most prominently $3.2 million in land donated by the school district and $3 million in infrastructure work by Pitkin County. Habitat for Humanity is also subsidizing each home by over $100,000, as home prices are based on what buyers can afford to pay: 28% of their gross monthly income for mortgage, insurance and taxes.

Energy improvements also are receiving more than $300,000 in help, including smart inverters and other assistance from electrical supplier Holy Cross Energy, discounted solar photovoltaic costs, and $107,500 from the Community Office for Resource Efficiency, a local nonprofit, for photovoltaic panels and heat pumps.

High-efficiency cold-climate air-source heat pumps provide the crucial technology at Basalt Vista. Heat in the outside air is absorbed and stored in a refrigerant as latent heat. Temperature of the refrigerant gas rises when compressed by an electric pump, providing the heat that can then be transferred to indoor water or air. Electricity facilitates the heat transfers.

Dramatic improvements in recent years have made air-source heat pumps useful in cold weather climates. Heat can be extracted from outdoor air as low as 22 degrees below Fahrenheit. Basalt normally can expect temperatures of 10 to 15 below zero in winter, a notch or two colder than Denver.

“A thousand feet higher and colder, I’m not sure we would have done it, to be honest with you,” said Scott Gilbert, president of the Habitat for Humanity chapter. Aspen is 18 miles away and 1,000 feet higher.

Megan Gilman, a zero-emissions building consultant from Edwards, says electric buildings in cold climates must be paired with on-site solar to produce the lowest long-term operating costs. Without that on-site production, electrification struggles to compete with natural gas, which has been cheap in Colorado for the last decade and is likely to remain so. Even more efficient equipment, including heat pumps, can help narrow this gap, she said.

An air-source heat pump can deliver 1.5 to 3 times more energy in the form of heat than the electrical energy it consumes. In the Basalt Vista homes, the heat is distributed from ceiling units, which do so more efficiently than the radiant base-board electric heaters installed in homes during the 1970s.

Basalt Vista constitutes a microgrid. A microgrid remains part of the broader electrical grid but has resources to remain functional at some reduced level if the grid connection is severed — particularly beneficial in a mountain area vulnerable to wildfires. Hospitals and military bases commonly have backup diesel generators or other resources to provide power in case grid electricity ceases.

All 27 units at Basalt Vista will have photovoltaic solar panels on the roofs and at least 7 units will have $15,000 lithium-ion battery packs, good for 10 years and 10,000 cycles. One battery can run the full load of two houses. With sparse use — refrigerator, microwave, and lighting — a battery can run a house for four days.

“If you have a certain amount of solar and storage in a microgrid area, you can separate from the bigger grid,” explained Steve Beuning, vice president for power and supplies at Holy Cross Energy. “You just have to rely upon those local resources. You might have some high priority loads you want to supply, but not other, non-essential demands.”

Greater flexibility while integrating higher levels of renewables in the electrical grid is another goal at Basalt Vista in a $1.65 million study sponsored by the Department of Energy and the National Renewable Energy Laboratory.

In the old utility model, centralized generation was designed to meet maximum demand. In most places, that demand occurs on hot summer afternoons and evenings. In the Basalt area, demand peaks during winter. The model being created at Basalt seeks to provide more interplay between generation and supply, modulating the demand to better correspond with local supply.

“For most of the utility world, it’s all about managing the supply to meet the demand,” he said. That requires transmission and distribution, all of it costly. “What we’re trying to do is maybe ask, ‘Can we dim the lights’ — that’s an analogy — ‘to meet the supply, or shift use of members to times when there is surplus?’ That’s what we’re trying to get done.”

Router-sized devices in this experiment prioritize uses and also function as in-house — literally — moderators between supply and demand. This sorting of electrical uses will occur not just in time of crisis, but also in everyday life at Basalt Vista.

The control solution, designed to meet needs of Holy Cross, comes from a novel algorithm developed by researchers at the National Renewable Energy Laboratory. The algorithm, called real-time optimal power, optimally schedules flexible uses, such as hot water heaters or charging and discharging of batteries, based on real-time voltage and power measurements. The first four duplex units at Basalt Vista have 20 such controllers to manage the photovoltaic panels, batteries, electric vehicle charging, heating and cooling.

For example, can the charging rate of an electric vehicle be slowed or deferred altogether until supplies have become more plentiful? Heating water might also be juggled. “So maybe you don’t get a 40-minute shower, but you get a 20-minute shower,” Bilby said. This increased flexibility of customer use may yield higher levels of lower-cost renewables.

The devices have been produced by Heila Technology, a company founded by Massachusetts Institute of Technology alumni. Heila’s vision is to build a futuristic grid with bolstered resilience that that meets consumer energy needs while maximizing reliance on renewable energy. It has applied the electrical controls — the brains that prioritizes uses — used in large applications, such as factories, and crafted them for use in small settings, like a house. In effect, they can make a house in Basalt Vista a microgrid of its own. Not coincidentally, the company’s name of Heila is Swedish for brains.

Francisco Morocz, the chief executive of Heila, said Basalt Vista is a pilot project, trying to demonstrate how granular the control systems can be. The next step would be to optimize use of on-site battery storage and help make it a resource within the broader energy system.

The National Renewable Energy Laboratory believes the results will have implications for utilities, particularly municipalities and cooperatives, around the world, delivering results that can be scaled to hundreds of homes while significantly improving grid operations.

Can all-electric homes such as those being built in Basalt be scaled? Costs of the Basalt Vista duplex and triplex units have been coming in at 15% per unit, roughly $40,000 to $50,000, more than conventional units. Technology is part of the increment. A heat pump water heater costs $1,800, compared to $600 for a 96% efficiency gas water heater, which is more expensive than the 85% efficiency models commonly found at big-box hardware stores.

Too, the construction trades have not geared up for all-electric homes. “Contractors were very wary of this. Bids were coming in at $10,000 more per unit than gas,” said Marty Treadway, program director for the Community Office for Resource Efficiency, or CORE. The local nonprofit donated $107,500 for photovoltaic panels and heat pumps.

“A prototype for affordable housing and a net-zero energy neighborhood makes a ton of sense for CORE,” Treadyway said. CORE has awarded $8.2 million in rebates and grants since 2011 to reduce emissions caused by buildings. The group’s primary funding comes from the Renewable Energy Mitigation Program, which exacts fees on large homes with high energy use in Aspen and Pitkin County if the homeowner or builder opts not to mitigate with on-site renewable energy.

Transportation constitutes Colorado’s second-largest source of greenhouse emissions, but buildings follow. For Colorado to slash emissions, it must figure out buildings. As Holy Cross’s Bilby points out, “You can’t do zero emissions with natural gas.”