Photo By
Lloyd DeGrane / for the Energy News Network 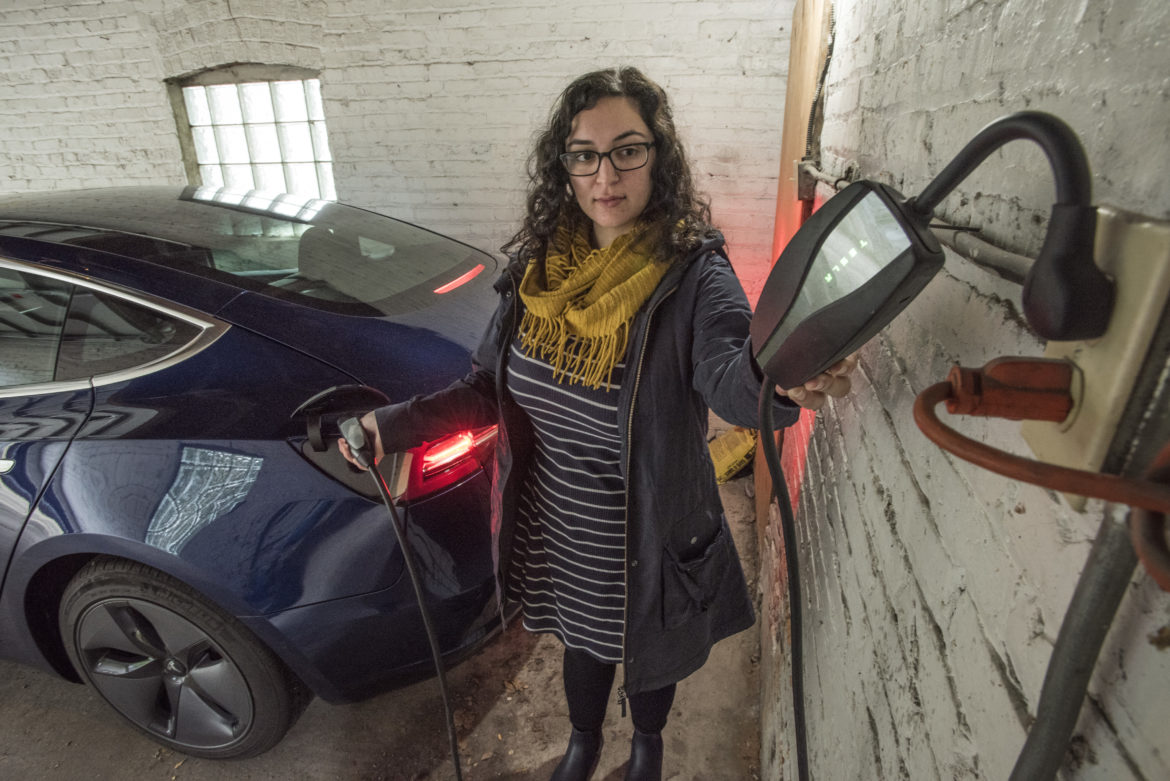 A building manager at a previous apartment had been reluctant to let Neda Deylami plug in the Nissan Leaf she drove at the time. Now Deylami uses a standard, 120-volt wall outlet in a parking garage to charge her Tesla, which she's had since April.

When Neda Deylami moved to a new apartment on Chicago’s North Side, she made sure to find a building where she could charge her electric Nissan Leaf.

At her previous building, the manager had been reluctant to let her plug in her car, and she wanted to be upfront with her new landlord. Today, she has access to a parking garage with a standard, 120-volt wall outlet — the same kind a laptop would be plugged into — where she can charge her vehicle.

Deylami is like many Chicago apartment dwellers who want to drive electric but often face challenges finding places to charge. The situation could improve for some under a new ordinance. The Chicago City Council voted Oct. 16 to require new buildings with 24 residential units or more to have at least two electric vehicle charging-ready spaces.

Developers won’t need to install the chargers; rather, they need to make sure chargers can be installed easily if property owners decide to do so. The original proposal introduced in September by council member Brendan Reilly would have required new buildings with five or more units to ensure at least 20% of their parking spaces could accommodate charging infrastructure.

The requirement is intended to help managers avoid future renovations, like installing wires and laying conduits — sometimes requiring boring into floors and through walls — which can cost thousands of dollars and discourage owners from installing chargers at all, clean transportation advocates said.

“It’s a way to expand customer choice because people should be able to install Level 2 chargers in their parking spaces if they want,” said David Kolata, executive director of the Citizens Utility Board. This could in turn help Chicago meet its carbon reduction goals, said Kolata, who supported the ordinance as originally proposed. Level 2 charging is common for electric vehicles and uses 240 volts — similar to clothes dryers and some washing machines — to charge over extended periods of time, like overnight or during work.

The ordinance will not require renovations to existing apartment buildings, which Deylami said could be an issue for drivers who can’t afford luxury apartments.

While she supported the proposed ordinance, noting that “Chicago is already so behind in EV policy,” she predicts most new developments in the city will be luxury condos downtown. “Even myself,” she said, “and I’m better off — I’m not going to be moving to a luxury condo.”

Electric car owners are often homeowners, so renters’ experiences tend to fall under the radar in EV owner groups, she said. Late last year, the 25-year-old attorney by training founded an electric vehicle owners group called Chicago for EVs to advocate for more accessible charging for the city’s residents, including young professionals as well as people in the city’s underserved communities.

Deylami grew up in West Ridge, a far north Chicago neighborhood that she described as a lower-income “transit desert” with sparse public commuting options. This community and others — especially on the South and West sides — where residents often deal with lower air quality due to nearby industrial sites, could benefit from having cleaner transportation like electric vehicles, she said.

But even public charging access is lower in these neighborhoods than it is in Chicago’s North Side and downtown neighborhoods. If more residential buildings in underserved neighborhoods had charging, electric cars would be a more viable option for those residents, Deylami said.

Ordinances in some cities go further than Chicago did, she said. Both New York and San Francisco, for example, have stipulations requiring buildings undergoing renovations to include upgrades so they can accommodate chargers. And while requiring 20% of spots to be charging-ready is standard, Deylami said she’d like to see that amount increased. Vancouver, for example, previously had a 20% requirement, but as of this year, new multifamily buildings in Vancouver must have chargers available at all residential spots.

And finally, Deylami believes city residents would benefit from a “right to charge” ordinance. In places like California where lawmakers have enacted this policy, residents who don’t already have access to chargers on the property are allowed to install them at their parking spots after coordinating with their building managers.

Deylami said the right to charge rule would also be useful for tenants who park in garages with wall outlets, since it would require landlords to allow residents to charge in those spots under reasonable conditions, like having the driver pay for the electricity. “I shouldn’t be nervous about moving to a new apartment and worrying about whether I can charge in my parking spot when there’s already an outlet there, I can confirm with an electrician that it’s safe, and I’m willing to reimburse the building for my usage,” she said.

But until policy catches up, other Chicago electric vehicle owners are devising their own ways to make up for the charging shortage.

Thirty-year-old Sam Sage, a production studio mechanic who lives on the city’s Northwest Side, worked out a rental deal with a nearby landlord whose building has a garage with a standard 120-volt wall outlet. He’s had that arrangement for about two years. At first he used a watt meter to measure and pay for his monthly electricity usage, but now, Sage pays a flat six-month fee. He said he pays less than $1,000 every half-year to rent the garage space, where he charges his Tesla Model 3 and his girlfriend uses it to charge her Fiat 500e.

While this arrangement works, “I really did have to put a lot of effort into charging it, going so far as to finding a place and making a deal with someone on my own,” Sage said. He originally raised the issue with the landlord of his own apartment, but “they didn’t really seem to care or even show any interest.”

Part of the problem, said Sage and Deylami, is that building managers often don’t realize how simple it can be to allow residents to charge. If they don’t want to install chargers, they can still allow tenants to charge in wall outlets if those are available. “It’s just like charging an iPhone,” Sage said.

In the absence of easy home charging, some advocates are trying to make public charging more accessible.

“We have to be very strategic with where we go and get charging when we can,” said Vanessa Perkins, who shares a Nissan Leaf with her boyfriend, neither of whom have charging at their apartments. For 31-year-old Perkins, an energy efficiency professional and a resident of the city’s West Side, where she uses street parking, charging isn’t readily available. Using public charging can be difficult since, for example, other cars need to charge at public spots and many stores with chargers close their parking lots at the end of the day, meaning overnight charging often isn’t possible.

She’s heard from other apartment renters who have to drive for work, many of whom say they’d like to drive electric but worry they won’t be able to charge.

Perkins recently completed a fellowship with E2 (Environmental Entrepreneurs), a clean energy advocacy group, in which she began a community charging project. Over the past year, she’s been interviewing building managers and owners at publicly accessible spots throughout the city — primarily small businesses and houses of worship — to gauge interest in hosting chargers and to determine ideal spots.

Now she’s hoping to start a nonprofit that could help fund public charging sites throughout the city, especially on the West and South sides, where air quality is a concern. “We need to have evenly distributed, affordable, accessible EV charging across the city,” she said.

Through her surveying, Perkins has tried to identify interested property managers at sites with underutilized parking lots that are close to large pockets of multifamily residences. Some organizations have approached her to conduct informal assessments, and Perkins tries to identify potential locations that wouldn’t require substantial renovations: for example, banks of parking spaces next to walls with electrical control panels where chargers can be connected, or parking lots that don’t have to be gated at night.

She set up an email address (communitycharging@gmail.com) for people to reach out to her if they’re interested in hosting community chargers.

Both Perkins and Sage, who are members of Deylami’s electric vehicle owner group, said they’d like to see more access in Chicago to resources like EVmatch, a sort of Airbnb for electric vehicle owners. Through the smartphone app, which originated in California, residential and commercial electric vehicle charging owners can list their chargers and set their prices, and drivers can find and reserve spots to charge.

While site hosts have registered in cities throughout the country, including the Chicago area, EVmatch has primarily focused so far on California and Colorado, with help from state and municipal grants, said Heather Hochrein, the app’s founder and CEO. They’ve also worked on the East Coast and are preparing to begin a new pilot with the Burlington, Vermont, electric utility, where they’ll test an expanded version of their software specifically geared toward multi-unit residential building owners.

In the near term, Hochrein’s company is focused on expanding to cities with high numbers of electric vehicles on the road and ambitious goals going forward, like Seattle and New York. Chicago hasn’t been as aggressive as those places, but it’s “certainly of interest,” she said. For markets like this, with lower levels of adoption, Hochrein said the company likes to have utility partners that can help coordinate customer outreach to encourage uptake of electric vehicles.

She started the service to help apartment tenants like herself who don’t have easy charging access. “There’s obviously a lot of opportunity for EVmatch to expand beyond markets like California,” she said, including to cities like Chicago, where so many residents rent.

Clarification: While some use 240 volts, most washing machines use standard 120-volt outlets. An earlier version of this article was unclear.