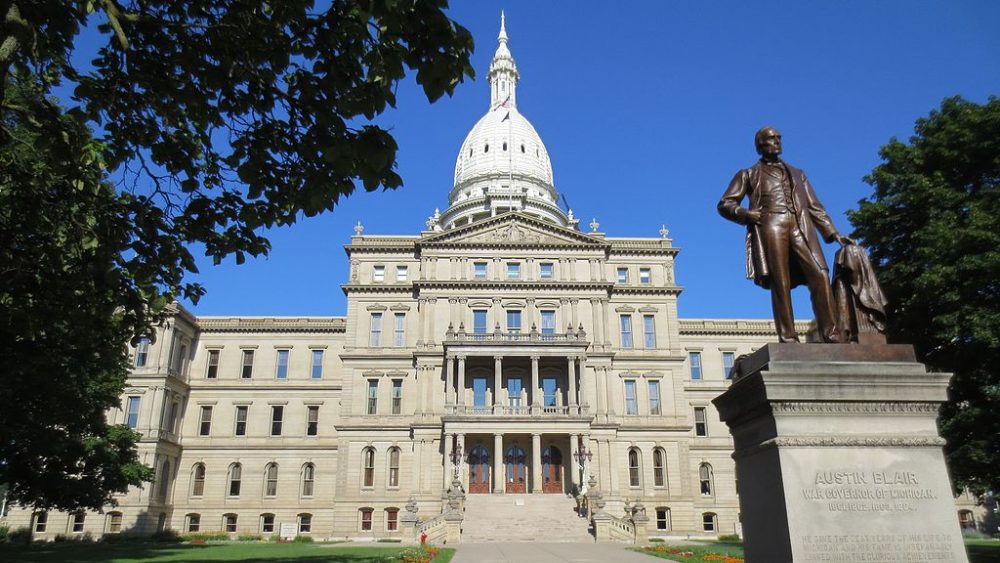 The Michigan Statehouse in Lansing.

Supporters split the bipartisan proposals into separate bills this session in hopes of overcoming opposition.

The so-called “energy freedom” legislation has been introduced every session since 2014 and seeks to expand microgrids and community solar as well as improve rates that customers receive for power sent back to the grid. Major utilities have used their lobbying strength to bury the efforts.

In the past three sessions, the bills were combined into a single package and failed to make it out of committee. (Michigan legislative sessions are two years.) Lawmakers and advocates are trying a new strategy this year by introducing the bills one at a time, separating what can be individually complex topics.

A bill allowing entities like hospitals and public safety departments to establish microgrids was introduced in April. A bill requiring utilities to allow customers to join “community renewable energy” projects was introduced last month. A bill package to encourage distributed generation by restoring net metering and establish a “fair value of solar” will be announced today.

“It got overwhelming to have members looking at [these issues] together. It’s partly why we have the divide-and-conquer strategy,” said Ed Rivet, executive director of the Michigan Conservative Energy Forum. The group — which has chapters throughout the country advocating clean energy development — is joined by multiple environmental and advanced energy business groups in supporting the legislation.

Rivet and others hope lawmakers take action on the bills following a contentious state budget process that’s largely — but not entirely — resolved. Supporters say the microgrid bill is timely following the polar vortex earlier this year that tightened electric and natural gas supplies. State Rep. Michele Hoitenga, who is sponsoring the community solar bill, says businesses in her district are growing tired of increasing electric bills.

Though “energy freedom” has bipartisan support, the concept has run into opposition from major utilities expressing concerns about cost-shifting and third-party ownership. Utilities Consumers Energy and DTE Energy also say they have major renewable energy build-out plans for the future.

In recent years, some lawmakers — particularly Senate Republicans — have been opposed to amending sweeping energy reforms from 2016.

Advocates maintain the concepts provide an overall benefit to the grid and help drive down costs for customers. They accuse the utilities of not looking out for customers’ interests.

“It’s something environmentalists and a lot of conservatives are concerned about — energy liberty and energy freedom — and can come together on,” said Mike Berkowitz, legislative and political director for the Michigan chapter of the Sierra Club.

Hoitenga, a Republican from the northern Lower Peninsula, is the lead sponsor of House Bill 4995, which would require utilities to interconnect community renewable energy projects if requested by customers. It is co-sponsored by seven Republicans and 10 Democrats.

The bill defines a “community renewable energy program” as a tariff or other agreement allowing owners to sign a power purchase agreement with the utility. Subscribers then receive a bill credit for the output based on their ownership of the system. Systems could be up to 5 megawatts and have at least 10 subscribers, which could include nonprofits, individuals and “low-income service organizations.”

Hoitenga is the co-owner of an oil and gas drilling consulting company, which she admits may be at odds with her support for solar.

“I work in oil and gas. I understand the competition component to this, but I am a proponent of all of the above,” Hoitenga said. “As energy prices continue to increase through the main utility companies, the people need choices.”

While states like Minnesota and Illinois have seen community solar projects take off in recent years, Michigan has seen one-off projects by a few utilities. That’s largely due to a lack of statewide policy allowing regulators to authorize such projects. Hoitenga says her bill is meant to resolve that.

A key difference in this year’s community solar bill allows businesses to invest in projects.

Rivet, who worked closely on drafting the bill, also says it was structured to be a part of utility voluntary green pricing programs. In other words, utilities wouldn’t be forced to build community solar projects, but rather interconnect them to the grid and allow current green pricing program customers to participate.

“Then [utilities] pay us reasonable value for it,” Rivet said. “It becomes a renewable asset to the utility and the grid, and we own our share of it.”

Hoitenga and others agree that the lobbying of the state’s two largest utilities — Consumers Energy and DTE Energy — are their biggest obstacle.

The process of holding committee hearings and potentially sending bills to the full Legislature remains unclear. State Rep. Joseph Bellino, who chairs the House Energy Committee, did not respond to multiple requests for comment.

DTE Energy declined to comment on the community solar bill because it hasn’t advanced out of committee. It cited its voluntary green pricing program — where customers pay a premium to offset their power with renewables — as a “flexible option for all our customers who wish to attribute a greater percentage of their energy use to renewable sources,” said DTE spokesperson Cynthia Hecht.

Advocates anticipate further opposition from DTE and Consumers over bills introduced today to restore the concept of net metering or at least higher compensation for customer solar power sent back to the grid.

DTE was the first utility in Michigan to transition to a new distributed generation program for future customers who generate their own solar power. The program, approved by state regulators in May, replaces net metering as required under 2016 energy laws.

The utility and advocates have had a years-long dispute over net metering and the prices that rooftop solar customers receive for sending excess power back to the grid. While DTE sought to significantly lower those prices to roughly the cost of wholesale power, advocates have claimed that these customers should be credited at the full retail price for power, as is allowed under net metering. In its DTE ruling, the Michigan Public Service Commission landed near the middle.

Despite the dispute over customer credits, Detroit-area customers and installers say DTE’s new “inflow-outflow” distributed generation program still allows customers to get a return on their investment, albeit over a slightly longer period of time compared to net metering.

And while DTE says more than three times as many customers are enrolled in voluntary green pricing than net metering, others say the utility could be doing more to support options, such as community solar.

“The reality of distributed generation is coming,” Rivet said, “whether anyone likes it or not.”