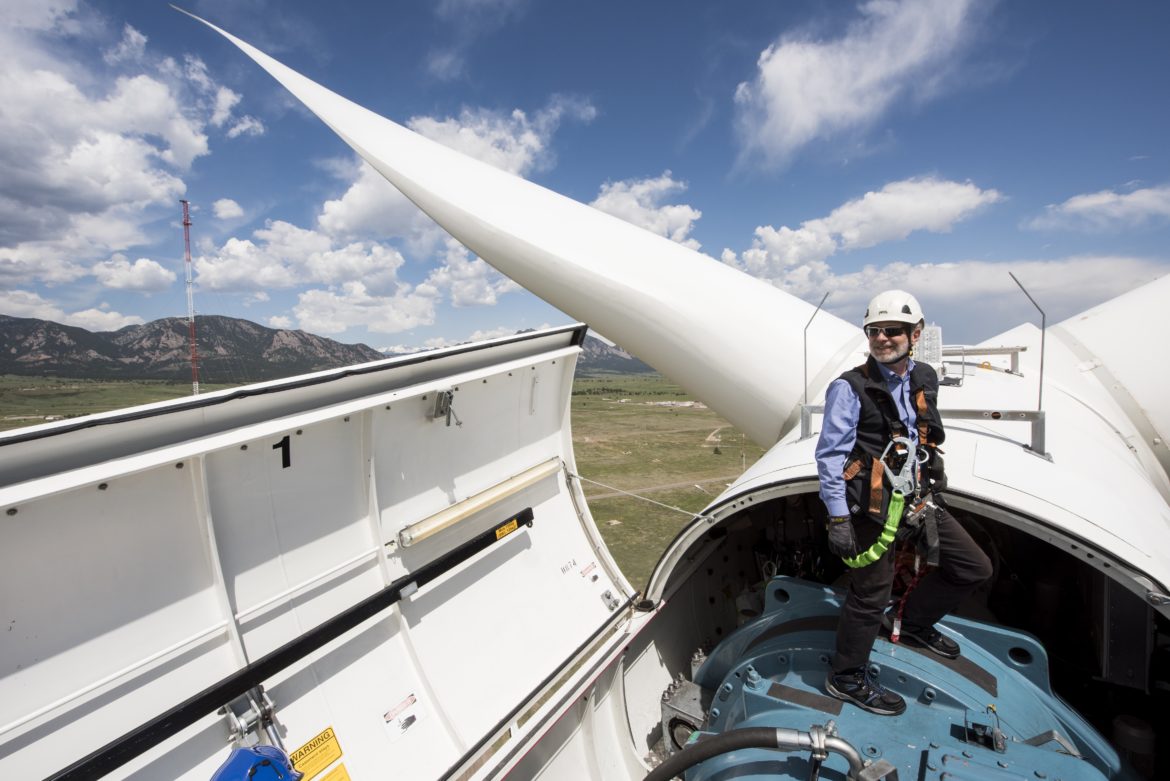 NREL Director Martin Keller in the nacelle of the Siemens 2.3-megawatt wind turbine at the National Wind Technology Center.

The world still needs renewable innovation to match the challenges facing the planet in the coming decades.

The cost of some renewables is now cheaper than fossil fuels or nuclear power, but researchers at the National Renewable Energy Laboratory in Golden, Colorado, continue to work on ways to improve clean energy technologies and integrate them into the grid.

NREL Director Martin Keller spoke with journalists this month as part of the Society of Environmental Journalists’ annual meeting about the need to continue renewable energy research.

The climate crisis will require every solution available. Meanwhile, the scale of the challenge is growing as Earth’s population grows. “If we continue on the same path by 2050, we’ll probably use about two times the resources our planet will be providing,” Keller said. “In order to transform the energy supply, we have to make changes.”

The cost of renewables is likely to keep falling as technology improves.

Costs have come down dramatically, making new renewables competitive with other forms of generation. Solar energy costs have been mostly “driven down by a much better alignment of the whole supply chain,” Keller said. That integration of the manufacturing and supply chain, plus various improvements in technology, has had a big impact on costs for new solar generation.

Wind energy’s costs have also come down, largely because taller, improved wind turbines are more and more efficient. “The bigger the machines get, the more megawatts you’re getting, the cheaper the costs are getting,” Keller said.

If existing technology is cost-competitive, why not just focus on deploying that instead of continuing research? Keller compares the question to asking why everyone isn’t still driving around in Model T cars. “We are just seeing the beginning of a new kind of era in renewables,” he said.

NREL has been working on high throughput solar panels that could be made on a thin, flexible film. “We have a chance to make solar panels the way we made newspapers in the past,” Keller explained. The roll-to-roll technology would put the “ink” for solar cells onto a flexible material, which could in turn be applied quickly and cheaply. “Down the road, we might envision that you go and paint them onto the outside of your house, and every surface can be a solar panel.”

The big challenges for that technology are improving the stability of the materials and getting the costs down.

Meanwhile, work on wind turbines is exploring ways to manufacture turbines on-site in order to deal with the current limits of land-based transportation. “A lot of work is being done on gearboxes,” Keller added. NREL is also exploring ways to make blades from recyclable materials, he said.

Research and innovation are still needed, especially for certain industries.

One big issue will be integrating more intermittent renewable energy on the grid. Another issue will be dealing with parts of the energy sector beyond electricity generation for homes and most businesses.

“Just doing electricity [with renewables] is not enough,” in Keller’s view. Energy for transportation is one challenge. He sees electric vehicles and driverless cars leading to a major shift in that sector within the next 10 to 15 years.

Read more: NREL engineer on the ‘grand challenges’ of supersizing wind power on the grid

But that still leaves shipping and air travel, Keller noted. Process heat for certain industries is also a major challenge.

Small nuclear reactors might eventually play a role for the industrial sector, although the costs so far are extremely high, Keller said. Except for the possibility of process heat, “even small modular reactors, in my view, will have a hard time competing with the costs of electricity generated by renewables,” he said.

Otherwise, NREL is exploring the concept of “electrons to molecules” as a way to provide energy for sectors that would have trouble going to an all-electric route. The basic idea is to use excess renewable energy to combine hydrogen with carbon dioxide to make energy-intensive hydrocarbons. The idea of using excess renewable energy to produce hydrogen for fuel cells has also been explored.

All forms of energy generation have some impact, Keller said, when asked about possible concerns in some areas about wind energy and birds. Coal, oil and gas emit greenhouse gases that drive human-caused climate change, for example, as well as other types of air and water pollution concerns.

“We have to be realistic,” Keller said. “No matter what we do to have this light on or to drive here or when you guys fly back, we have an impact. So we have to try … to keep the impact on our environment the lowest,” while also taking into consideration social aspects, social justice and other concerns.

Ultimately, he said, everyone at NREL has one common reason for working there. “We are here to make this a better planet.”