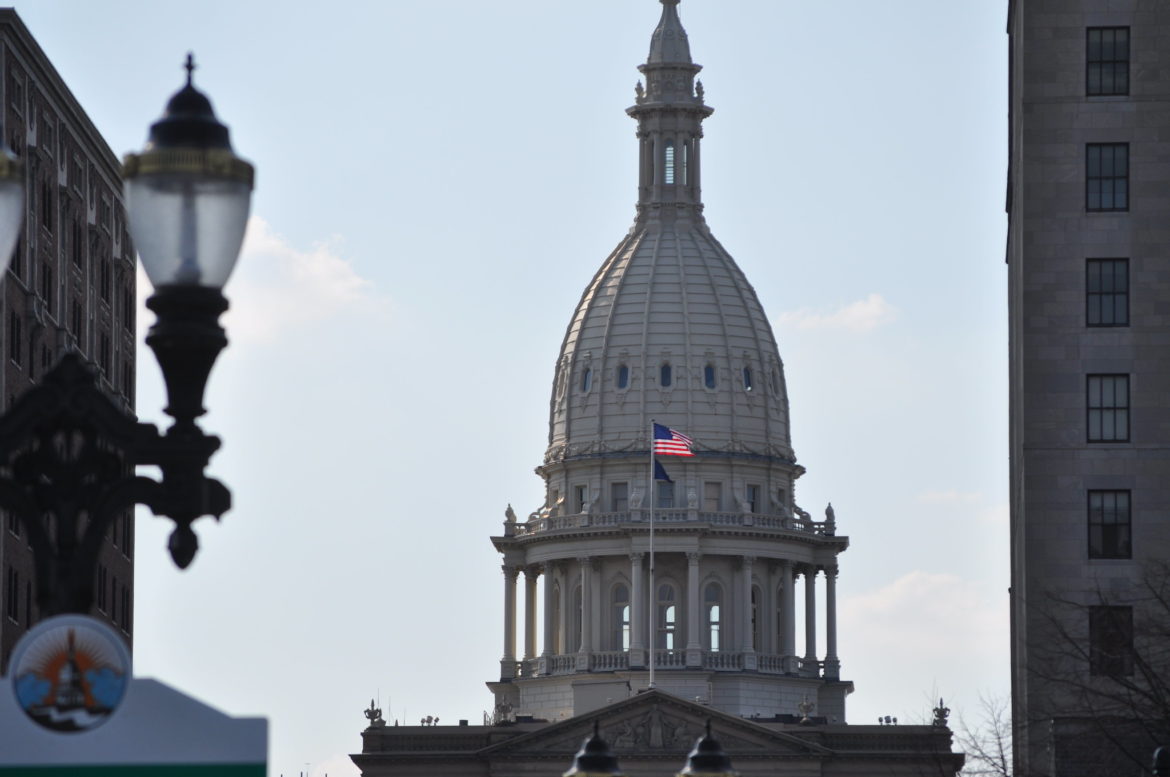 The Michigan Statehouse in Lansing.

State leaders say Michigan needs to tackle policy changes to prepare it for the growth of distributed renewable power.

A new Michigan energy initiative aims to translate two years of planning into action that can transform the state’s electricity system.

The MI Power Grid initiative, jointly launched by Gov. Gretchen Whitmer and the Michigan Public Service Commission, was met with broad support from clean energy and consumer advocates as well as the state’s largest energy company.

The overarching goal is to better prepare Michigan for the shift from large centralized coal plants to distributed renewable resources like wind and solar and emerging technology like battery storage. Officials cite declining renewable energy costs as a key driver of the initiative.

“It’s about how we reform the regulatory system to adapt to this change and help customers in the process,” said Sally Talberg, who chairs the commission.

Major energy reforms signed into law in 2016 directed the Public Service Commission to form planning groups around several emerging issues, including distributed generation, renewable energy, interconnection, energy efficiency and demand response. Much of that work is completed, accompanied by staff reports and part of ongoing or forthcoming utility dockets.

However, the commission noted in its order this month, “There is a risk that these distinct workstreams are undertaken in isolation from one another, and a sense that a more holistic view of the goals and objectives of these efforts would be of value.”

Talberg says MI Power Grid will take the past two years’ planning “to the next level,” while the commission order says it will include “changes to utility regulation designed to advance Michigan’s clean energy future.”

“We’ve been down in the trenches about how we do planning, but we really are focused here — it’s not just talking about change that’s happening,” she said.

Talberg says the program’s work could lead directly to new commission rulemaking and will “come into play in a number of different proceedings.” For example, creating new interconnection standards for technologies like microgrids, energy storage, and solar, as well as appearing in utility integrated resource plans.

Over the next year, the commission plans to focus on interconnection rules, distribution planning, demand response, grid security and reliability, and pilot programs. The commission order directs staff to start looking into potential utility pilot projects with a report due in less than a year.

“As our state’s electric utilities continue to set bold clean energy and carbon reduction goals, it is becoming increasingly important for Michigan customers to become more engaged participants in the energy system,” said Commissioner Tremaine Phillips, who was appointed in July.

“It’s a positive sign the commission is really embracing this approach to try to grapple with these big questions,” she said. “We have to make sure we do it right to achieve benefits for customers.”

Additionally, commission proceedings take place outside of policy action from the Legislature, which hasn’t voted on significant clean energy bills since the 2016 law.

“It’s pretty apparent to everyone who’s playing a role in the energy conversation in Michigan that the Legislature has largely abdicated its responsibility to make reforms in the energy policy space,” Jameson said. “There’s just zero movement on legislation. Not to say that won’t change, but I think that puts the impetus on reforms to take place in other venues.”

She also alluded to Scripps’ statement, noting: “We don’t want just another lengthy process where stakeholders get in a room and maybe a report comes out the other end. It really does need to be periodic commission orders.”

Margrethe Kearny, a staff attorney based in Michigan with the Environmental Law and Policy Center, said MI Power Grid will also give a venue for advocates to counter utility pushback. Most recently this was shown in utility opposition to expanding community solar and rooftop solar programs.

“It removes an element of pushback towards renewables and also makes it way more efficient to bring renewables in as the dominant technology for providing energy in the state of Michigan,” Kearny said. “The concern, of course, is … a report comes out then nothing happens with it.”

MI Power Grid also puts Michigan in line with utility regulators across the country taking similar steps. Talberg joined other utility regulators in Columbus, Ohio, this month at a meeting of the National Association of Regulatory Utility Commissioners and National Association of State Energy Officials. U.S. Department of Energy funding is being directed to coordinate state planning around distributed generation and transmission.

Katherine Hamilton, a Washington-based clean energy lobbyist and consultant, said on the “Energy Gang” podcast this month that Michigan’s effort comes as an increasing number of utility regulators are starting to change their approach to long-term plans proposed by utilities.

“Utility commissions are already starting to change just based on being part of this conversation,” Hamilton said.

Ryan Katofsky, managing director for the Washington-based Advanced Energy Economy, said in a statement that MI Power Grid is “focusing on all the right things” and has “created a scope that’s both ambitious and achievable.”

Talberg said the changes among utility regulators’ approach to planning are “profound” and are occurring across a broad section states.

“It’s a really big deal in terms of the opportunity for Michigan,” Talberg said. “We’ve been undergoing this transition with a lot of aging infrastructure and a shift in energy supplies. We’re on the cusp of a transformational change, and we want to make the most of it.”